For several weeks now -perhaps a month- my cameras have been getting triggered by the slighted movement of surrounding vegetation. I’ve pruned back the flora and reduced the size of the detection zone and experimented with sensitivity. But it seems that movement in areas adjacent to the detection zone is picked up. The worst part is that larger objects -like me- do not always trigger the cameras. On some days the notifications drive me crazy going off at an average of 1 every 15 minutes… and then NOTHING when I stand in front of the camera. The cameras are picking up tiny branch movements and ignoring human-sized moving object. What’s going on?

I’m experiencing the same thing. Very frustrating to get multiple alerts from tree shadows. I wonder if there is a recommended sensitivity setting that might help.

I’ve put the sensitivity to “2” and still get alerts for individual leaves on plants. Leaves?! Of course, if it doesn’t see me walk by at a higher sensitivity it’s not going to pick me up at 2. 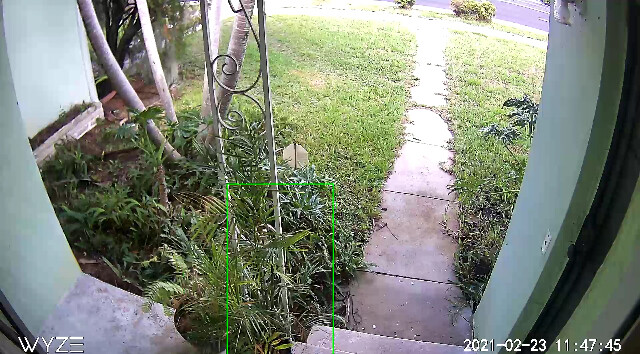 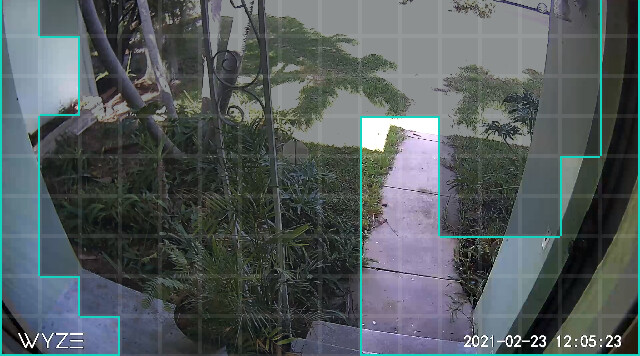 Either this is a failing of Wyze software OR an attempt by Wyze to get me to purchase their Cam Plus subscription.

I have two V3 cams pointing at the backyard. Twice a week some animal, raccoon or opossum maybe, digs holes looking for food. Neither of the V3 cams catch them on video. Starlight or floodlight makes no difference. These might as well be persons trespassing and would never leave a second of video for the cops to identify.

I too feel your pain. I am getting inundated with notifications from shadows during the day and stray car lights at night. I have sent numerous recordings in the hopes that the AI team can help eliminate the majority of these false alarms.

The V3 doesn’t have the grid.

However, as you can see from the screenshots motion outside the monitored space is triggering notifications. So it’s not working any better than the crop box.

Yup … I can see that from your previous post. I still think the grid selection would still provide better granularity when they (hopefully) get the detection AI sorted out. It still needs to be an option for the V3 camera regardless.

Thanks for your response.

Grid beats box. Definitely. I’m sure it’ll be available on all their cameras.

BTW: It’s not AI. It’s a bunch of coders making slight mods to the detection programming. That’s why they ask us for permission to look over our video clips. A true AI would scan through all video clips and create an algorithm. AIs, like Watson, are still out of reach of most companies’ toolboxes. If they did have AI, Microsoft Windows would fix itself before crashing. Or recognize when Russians are hacking their servers. LOL

Yes, the grid should be on all cameras. I’ve done some camera systems for commercial and grid is great vs block.

Yesterday, the grid turned to a box detection zone. I adjusted. Today, the zone is a grid again. So I adjusted, again. The grid is now four squares as a-n-y-t-h-i-n-g triggers a notification… except people or animals. I don’t trigger it coming into the house but the plant on the porch reminds me it’s there all day long? Then I get the ads for Wyze “A.I.” and it makes me wonder: “Is Wyze doing this to get me to subscribe?”

Today’s one of those days when everything is setting off every camera’s detection zone. Every static object has been removed from the detection zone. But that hasn’t stopped the notifications. Now I have to disable everything Wyze just to maintain my sanity.