And it missed my van being stolen

And so my neighbor called today, thinking we were gone and the cats might need feeding, wanting to make sure that my now-married daughter was stopping by.

I wondered why he thought that, and it was because both vehicles weren’t there.

Some inquiry found that both of my adult daughters in the house assumed we’d taken the van. (but then why didn’t you think that my car was missing???)

realizing that I’d noticed a reflection of the van in my window at some point, I started triangulating days.

And, sure enough, at 10:45 P.M. on the 13th, headlights were caught going by in the reflection. The van was there, both the vague image and by blocking the lights for a moment.

I suppose we wouldn’t have gotten facial images, anyway, but still . . . and I guess they drove it away with the lights off.

No Cam Plus it sounds like, the five minute cool down period missed the event.

That camera has camplus.

It doesn’t have an SD in it.

I can just make out the shape of the vehicle in the dark; it is more “visible” from the headlights disappearing behind it.

The window is about 60 feet from the curb, and what I’m picking up here is reflection in it. It doesn’t pick up a person on the sidewalk at night.

Camplus still has a cooldown just to avoid constant nattering when it’s windy, doesn’t it?

I had to go looking for these motion events; I have notifications set only for people.

Other than Wyze screwing up…

EDIT:
Or a WiFi Jammer was used,
Power Failure to camera of some sort…
Internet outage, etc…

There are definitely a lot of factors that can play into all this including distance, lighting conditions, sensitivity settings, placement (if it’s behind a window, this reduces sensitivity significantly) and much more, but it is a little surprising that it did not see your van rolling away even in the dark. It’s also surprising that they were able to steal it so quickly.

This is a big reason why I always have an SD card in all my cams recording continuously even though I also have Cam Plus on all of them.

Cam Plus does not have any cooldown at all, not even for wind or anything. The only things that really affect it are detection zones and detection sensitivity settings…other than intentional intervention like bryanhu explained such as using a wifi jammer, or losing power or something. (in addition to obvious things like how clearly it can see…lighting conditions, reflective obstructions like being behind glass with reflection interference, etc)

It sounds like you have this camera behind a window? That could help explain it. I have had some looking out of windows, and cameras perform better in the daytime, but perform particularly poorly at night in being able to detect real movement, although they will definitely trigger a lot with light and reflections.

Sadly there isn’t much that can be done about this current theft, but I would definitely consider getting an SD card to record continuously so you never miss an event again. It always works better outside if it’s not too hard to set up outside, but if you have an SD card, at least you’ll have a backup to ensure you never miss anything again.

What are your sensitivity settings set at?

I can just make out the shape of the vehicle in the dark; it is more “visible” from the headlights disappearing behind it.

Sounds like the there is very little contrast if any between the van and the surrounding night. Can you post a screen shot of the camera view with the van in place? The headlights had enough contrast to trigger motion recording but what ever occured with the van was in to dark of a location to trigger an event being saved with Camplus.

I highly recommend a high endurance SD card for the v3, and set to continuous for locations such as this.

The camera is actually aimed at my door. Because of that, it includes the window, and the van just happened to be parked where its reflection could be seen in the window.

Here is a clip from earlier in the day, just to show where the van was (I’m utterly failing at exporting a frame or cropping)

Here’s 10:45. You can faintly make out the van, but it’s more obvious from the headlights disappearing as the car passes:

I think it’s good that you were able to narrow down the time frame when it occurred, but in this config I think even if the van was lit up by area light not much would have been caught or recognized by the camera.

If you’re going to mount those flood lights facing the driveway I think that’ll be good coverage of the driveway.

I like and encourage overlapping coverage of cameras. I have two cameras that watch my driveway, and two cameras that watch my front door / patio. I don’t know what your outside setup is and if both those flood lights are going to be overlooking the driveway but you may want to think about having another camera, probably a V3, out there somewhere looking at the driveway from a separate angle. You don’t have to have notifications on if you think you’ll get a lot from street activity but if you have an SD card in the camera you’ll be catching a lot of extra stuff that you can refer back to if something happens or the need arises.

Thanks for the videos! Sorry about the van!

I can’t like and agree with this enough. I have two cameras that are somewhat facing each other so that their views are overlapping each other for my backyard. There’s no real way to get anywhere in my backyard without being seen 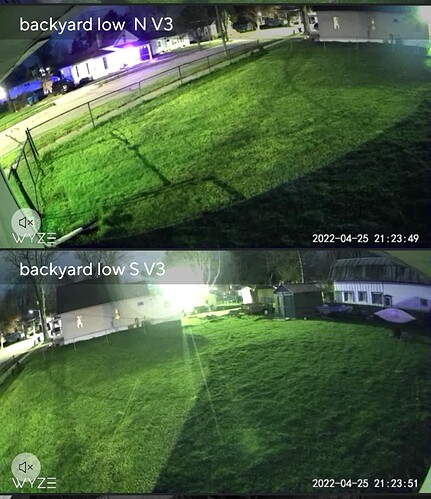 And on one of my driveways I have two separate cameras which actually was at one point because I had extra V2 cameras and when I realized how nice it was to be able to have multiple views they were then replaced with v3s :-). More is definitely better. The ones on my driveway work two of approximately 5 that captured a guy trying to get into my neighbor’s vehicle one of my vehicles and numerous other vehicles in the neighborhood on New Year’s 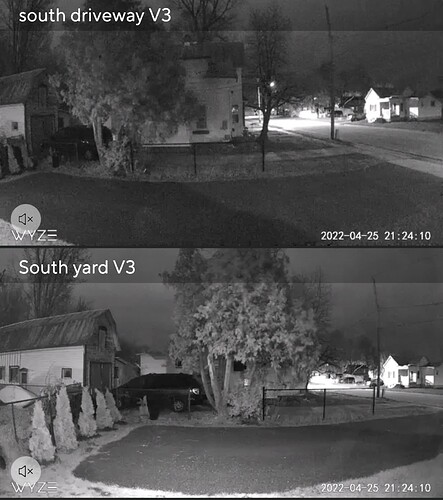