After getting a new outdoor camera,new base and new sd card. Now I know it is Wyze’s glitches.
All my event recordings are fine but when it comes to scheduled recordings. They freeze about 5-10 seconds in. If the video is over 20 seconds they will unfreeze.

Def a wyze issue. I’m betting they make the scheduled recording so awful so people buy the cam plus since event recording is great. So sick of it. I’ve tried turning off cameras daily and back on. I’ve tried formatting cards daily. They are worthless if they dont do what they are supposed to do. With 3 cameras it would be insane for me to pay for cam plus just to get video. I’ve lost and not captured things that I now have to sue people over. I live in a high crime active area in baltimore Md. i live next door to a half way house that is why I got the cameras. Yet they keep failing me every day. It’s ridiculous and I’m serious thinking about a class action because I know I’m not the only 1. Why continue to make products when you can’t even get the ones you have to work as intended. I thought I did my due diligence. I did research and talked to customer support. With any questions I could come up with but some things you can’t ask about because you don’t know they exist or happen.

I’ve tried everything to try to solve this. Customer support has tried to help but it’s all cameras and all cards and both bases. Yea it still happens when I take the card out and watch elsewhere. It’s something to do with how the cameras save to the memory card. As youll notice possibly in this video. The sound always records. It just static’s and freezes the video until it resets. Which can cause full videos to freeze.
Scheduled recordings catch more than events do.
#outdoor

How can they continue to sell a product that doesn’t work as they described.

So i posted earlier about how I know it’s the wyze cameras themselves that are causing the freezing and what not. So I spent $60 and got wyze can plus. Figured that was the only way I was going to get recordings that captured everything. Since the scheduled recordings cause freezing and static

So cam plus I find out. Misses things too. I went and walked in front of a camera. Not a single event or anything ok no worry’s.

I just noticed when the trash men cam. It only recorded for a couple seconds. With plenty of noise. But what’s funny is the scheduled recording caught a longer video. This is really some bull.
So not only does cam plus not capture everything when paid. I still have to hope and rely on faulty scheduled recordings. Odd thing though. Last 2 scheduled didn’t have the static and freeze but were only a short video. Wasted money. All around

[Mod Edit] Merged with an existing thread about same/similar issue by same user to continue the conversation.

Sorry for the trouble. May I ask what device are you using? Is it V2 or Pan V1? We have found serval issues on V2 and Pan V1 that cause missing AI detection and we will release the fixes as soon as we can.

I’m assuming 1 I think 2 came out shortly after I got these. It’s not just the not picking up motion.
After I bought cam plus I went on the porch right in front of the camera for a bit. Nothing got recorded. It’s just really strange also how scheduled recording gets more than events but scheduled recordings pause and freeze the video while seeming like it still is recording.

You’d think with cam plus it would keep recording so I don’t see how now after paying. It’s capturing more on the sd card. When cam plus has no cooldown
I have sensitivity high and distance far. I went through and made sure to reconfigure everything for cam plus as it said. It’s like I can’t win with these things.
We know it’s not just the playback freezing because it does it on the card itself. So it had to be an issue with recording. So now I’m wondering if the issue is it’s trying to do 2 things at once and that’s the problem. Like recording the event while saving the video to the card. I’ve wanted these to work so bad. Not just because I’ve spent the money I liked the idea behind the company. Events before cam seemed like they were perfect just not catching everything. 12 seconds is way to short. That’s why I bought the wyze cards.

What type, size and brand of SD cards are you using? I wouldn’t say its the “device trying to do two things at once” as the features are meant to run side by side if that’s what you want. What firmware version is on the camera? what is on the base? and while we are at it, what version of the app are you using?

It’s the Wyle brand card they sell.
I was just out in the front myself walking my dog to use the bathroom for over 5 mins. It didn’t catch a thing on 2 cameras. So strange because now before wyze cam plus. It seemed to always catch everything.
I’m gonna give it 10 mins just in case it’s gotta transfer to the cloud or whatever but this is definitely strange now.

Yea I just hit me too it didn’t record my kid walking down the sidewalk to the house either. She came home at 2:40 not a single video. Wth

You need to specify weither its a video in the cloud or on the scheduled recording, as they are separate entities and have different troubleshooting ways.

What firmware version is on the camera? what is on the base? and while we are at it, what version of the app are you using?

Doing scheduled recording with a full version of cam plus on sounds like a nightmare to me. I have been using scheduled event recording for more than 1 year because the cams do not have cam plus. I just put CP lite on them and have had 1 out of 14 long event videos freeze at the start for a few seconds then restart. I think it has to do with the battery powered cam with the base trying to upload the cloud video and record to the SD at the same time. It doesn’t happen with the short videos, just the ones 1 min plus. I get 10-14 events a night on my critter cam and usually one of them has issues when playing back on the SD card - Samsung 32GB High endurance. I would post a bad video but it may be to big, 4.85 MB ??
This is what it does when it stops for a few seconds. 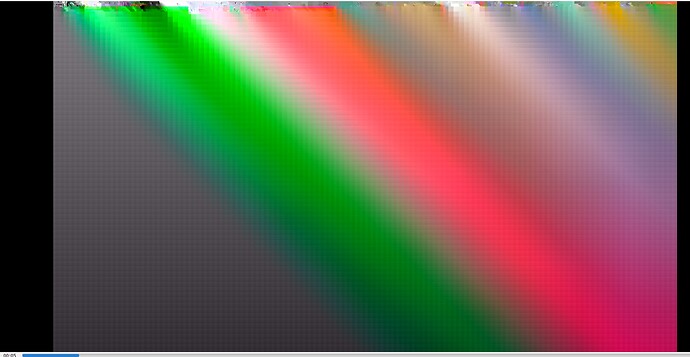 my suggestion is to to remove sd card and read card directly to rule out wifi .

if it is the same freeze, use dfferent sd card.

do you have ham radio people around?

I checked mine directly off of the SD, mine only freezes for a few seconds when the video starts and I do get a 12 second cloud video also, it’s not wi-fi or the card. I will try to post this video which does not freeze and it was recorded directly after the first one that froze.

I’ve already mentioned that above on one of the comments. It still happens. Doesn’t matter if it’s on the computer or the camera. It’s the cameras fault.

It’s like the camera can’t record to the cloud and the sd card. There’s definitely an issue going on there’s no reason why it should freeze at about 3-5 seconds then unfreeze shortly after and play as normal. I’m not the only one with this issue. I’ve figured out it’s definitely their devices and not anything else.
Frustrating paying almost $300 now and not having anything working how it should and giving it since aug when I bought them to try to work out all the kinks.
Today makes no sense either why after I buy cam
Plus. It doesn’t pick up me nor my kid coming in yard on 2 cameras that it has always picked up on every other day. So now I wasted more money.
I can say for 1 maybe the sun was in it but the other one is next to my front door on a covered porch. It should have at least picked me up coming and going and her coming home

Yea. They keep freezing that’s why I bit the bullet today and bought cam plus for 4 of my cameras. Most scheduled recordings are short and no issues because they are short but it’s always the ones that seem to go over 10-12 seconds that it has the issue of freezing and pausing and that’s exactly why we buy the memory cards to avoid buying cam plus. It just seems the cameras can’t record to cloud and the the sd card.

Now cam plus isn’t catching what the cameras normally catch. It’s still strange to that even with cam plus the scheduled recording records but events don’t if anything does at all

I have a tiny foster dog. I took outside. I walked it in front of both cameras. Not even intentionally When it hit me that hey I should check and see how long they recorded. I saw nothing.

The trash men today. Scheduled recording caught them driving I the street but the event did not. That was the kicker for getting cam plus. After a couple weeks ago the trash men broke my mailbox and I had no video of it and that’s a $400 replacement now. I’ve been watching and paying more attention to how and what the cameras are getting. I’m home all day. So I know what should be recording. Granted I probably have more videos per day than average but the camera especially with plus. Should be able to capture everything

Since you have cam plus do you have your cameras set for “No Cooldown” ? 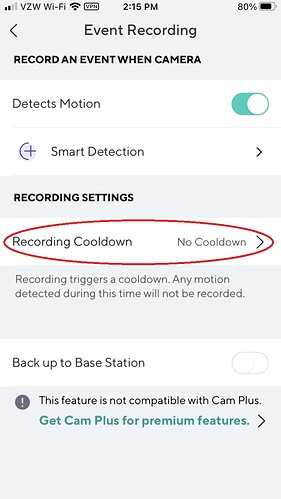 Yes I have it on no cooldown. I was just out there again with my dog. For over 5 mins.
The camera on events only caught 12-16 sec but magically the scheduled recordInfo caught 16-19 (3videos) recordings.

That’s not right. The scheduled recording are set for 1 min cooldown.

The event on cam plus should not stop recording as long as there’s motion and since it’s set for up to 5 min in length.

Can plus should definitely be recording as long as scheduled. This makes no sense 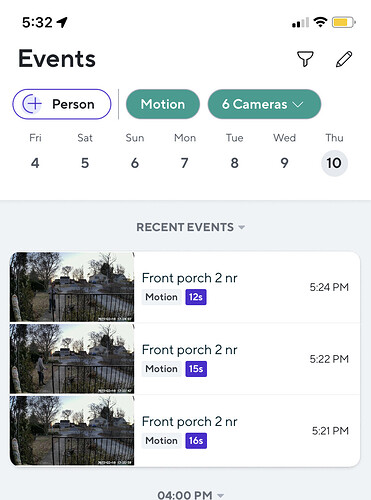 They should have never stopped in
Between videos. It should have been one long video.
At least that’s why I’m told by wyze as long as there’s movement it will record. Stayed on the path In front it failed

On the top of your events page where Motion is in the green box, tap that until it turns white (Off). You can also tap the funnel icon near the top right to open a page and on the bottom tap show all results

Yea A waste of money as now after buying cam plus. It doesn’t even record all events. It used to record my hubby coming home as his car pulls in 10 ft away from it. Nope not a single video. It used to record my kid walking across my yard as she came home from school nope not anymore. I shouldn’t have bought cam plus at least before it worked for all 12 second videos