Hi, gyzmo! Have you recommended them to any compatriots? Are you still friends?

Cams are like an old Fashioned addiction, the dealer starts you off slow… suck’in you in…

Ahhh, I got an intimation of that in the first few months when I was trying to push them to their advertised potential.

Now that I know what’s happening around my urban multi-family neighborhood in the middle of the night, will I ever be comfortable not-knowing again? Can one ever know too much??

For me, the answer to both was “Yes”, but I certainly felt the Monster’s pull…

Hello @peepeep, If it is for one or two cameras, yes but if someone wants to mount a system with several cameras, I hesitate. When we are used to certain functions and they no longer function as before right after an update, it is annoying. If it is for something else from Wyze, to see all the problems on the forum, no, I do not recommend.

When you know that the problem comes from your side, it’s fun to try to find the cause but when it comes from elsewhere, it’s frustrating because there is nothing you can do about it.

An update is supposed to be used to improve a system, not to degrade its functionalities. With all the new products Wyze is trying to integrate into one application, the future will be difficult but I try remain hopeful.

I’ve been happy with my 10 cameras (7V2 and 3 Pans) for a year. Now I have been less so for a month. However, they all work but not as at the beginning. I didn’t lose everything.

When you know that the problem comes from your side, it’s fun to try to find the cause but when it comes from elsewhere, it’s frustrating because there is nothing you can do about it.

Stellar comment, and the above shines extra bright for me.

Yes, since april 27 (day of iOS software update), grouping my cams in groups, caused me some issues. I had to remove my groups in the hope that the problems will be resolved in the future update

Can you explain what this issue is?

Some folks claim to have absolutely no problems and others are beset with them and get stuck in troubleshooting hell.

People on the boards who claim “, works as advertised” are asserting that condition, not documenting it, and that claim is accepted.

People who claim “OMG, help, this thing is ,” are requested here and by support to describe, provide evidence, to document the flaw or error. And, as activity on the boards demonstrates, there is tremendous energy expended in the attempt.

Maybe some of this at play:

Boths tribes generally agree on just one thing: the opposing tribe is clueless.

Since de update on april 21 (2.10.62), when your cams are in groups, there is the delay before viewing your cam in HD. When you click a thumbnail, the view is in 360P with a message « please wait ». After 2-12 secongs the cam auto switch in HD. If I change the view in landscape, the view freeze frequently.

When the cam is not in group, when you click on it, the live view is directly in HD…no waiting time, no freezing etc…

Second video: With groups. The issues…

Another issue is the access time for the playback. Before the update, it was around 2-3 seconds, after the update, 7-10 seconds. After that time, if you go back in the playback, it takes 4-5 seconds at each step for the first 4 back steps. After, if you go further in the same playback, no waiting time.

All those issues are probably related to each other’s.

I have those problems with my 2 iPhones 6+ and my iPad mini5(A12). My router is a linksys EA-9500 and I have a gigabyte connection. The speeds at my phones are 180Mb/s and 400Mb/s to my iPad. These issues are on ALL my cams(7v2-3pans). The videos in this reply are from my iPhone. 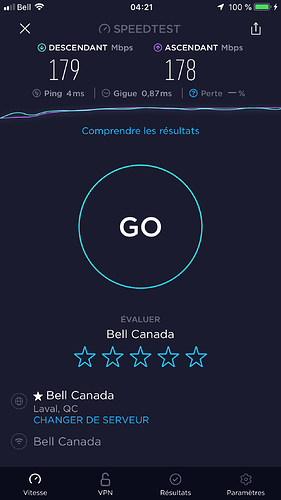 EVERYTHING WAS WORKING FINE before the april 21 iOS software update.(2.10.62)

I remember, last year, after an application update, the grouping had issues. Wyze has released an update to correct that a few days later. Didn’t have issues with grouping later. There was another update after april 21 (2.10.72) but I have the same issues with groups**

To WYZE: it will be good to have the choice for the applications. One for camera only(WYZE CAM) and one for cams plus all your stuff.(WYZE THINGS). I don’t want to deal with all the issues that your new stuff brings to me.

Thank you for posting some incredibly insightful and actionable new information! (Maybe this has been discussed before, but I sure missed it…)

It took me all of a few seconds to un-group a couple of cams and verify exactly what you reported - cams are a LOT more responsive when not in groups! ( this is just testing one Android device btw, will play with the iOS ones next )

Loading time, viewing experience and especially going back through playback are all very noticeably improved!

Just that single variable change, absolutely everything else untouched, and the entire experience is completely different.

I presume the root cause is all the mode switching that Wyze had to program in so that viewing a 4-up group would not overpower slower connections or user devices.

But still, knowing that, I can keep my critical action cams out of groups and leave the ones watching plants in groups. 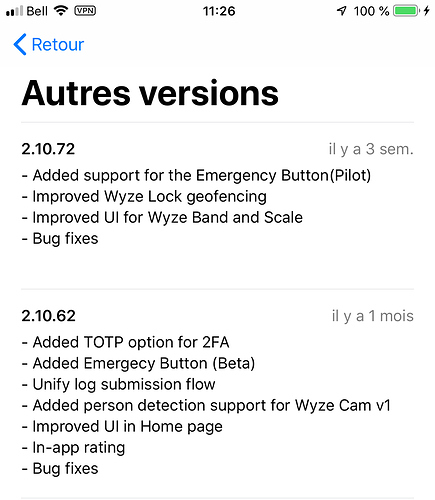 Hi, forum folks! We’re releasing app 2.10.62 for iOS and 2.10.36 for Android! Remember, app reviews are taking longer than usual right now so you should see the update within a week if you don’t have it yet. What’s New: Added a Time-based One-Time Password option for Two-Factor Authentication Unified the log submission flow Added person detection support for Wyze Cam v1 Added person detection support for RTSP firmware Improved the UI for the Home page Added an in-app rating Bug fixes And we…

@rbruceporter tried to help me with these issues but without videos, it was tough for me to explain them.

Thank you for posting some incredibly insightful and actionable new information!

I certainly see your issues clearly. However I cannot replicate them even a little bit. My environment is similar to yours. iOS using 2 iPhone X’s and 6th and 7th gen iPad. I have 8 cameras currently in use. 6 are in 2 groups of 3 and 2 are singles. Oh and 1 shared camera I can view.

There is no noticeable delay in viewing cameras in or not in groups. I moved cameras out of and back into groups and checked. And in my case from clicking a camera to viewing it is about 1.5 seconds. When in a group it takes 2-3 seconds for all 3 cameras to stream. Selecting any camera from the group results in a delay of 1 to 1.5 seconds.

I have a newish Linksys router running in Access Point mode. And my up and down speeds are similar to yours.

The bit rates vary all over the map but all cameras are in HD mode. That said groups are not viewable in HD as far as I know. The group is viewed I believe in 360 but I will defer to someone from Wyze for confirmation of that.

So while I can certainly see what you are talking about in your videos, I can’t replicate it. Which would indicate to me that it is probably a combination of things. Be interesting to see what others find trying to replicate your conditions.

Never understood why the app so aggressively launches the camera views, constantly starting and restarting when you drill down from group view to individual camera view. For me something breaks in the transition roughly half the time.

Saw a documentary last night about a Japanese cat who sat on a mountaintop and observed an overhanging thunderstorm in progress, then descended, described and drew what he had observed, sent it to an established academic researcher in Chicago whose work resonated with his, was offered a job, and began his long career. One obsessive dude. Persistent. Thick skinned. Stubborn. “Mr. Tornado” he came to be called. Quite the guy.

It is certain that my first language is not English but you speak in parable, smoking weeds or what? I often have trouble following you in your answers. Too funny lol

Maybe the guys at Wyze are all busy developing products for sale and they don’t have the time or the skill to make them work properly.

All they’re maybe lacking is hindquarter contact with the smooth, cool stone of the mountain.

I hope I don’t have to buy another $500 router to get my cameras to work properly lol. A+🙂

What probably confused you was “cat”, which he meant as slang for guy / dude / man / person. I’m extremely native English speaking and I thought he meant a feline at first.