This is DAYTIME usage, which will be less than night mode. I will update this when I can do a night mode test.

Here’s the typical power usage. It goes up and down a bit depending on activity, but you can see from the graph that it varies so little as to barely be a blip. So let’s just go with 1.67 watts as a nominal number. That’s 40 watts a day. If we look at one of the jump start packs with USB out, like my Anker 15k pack, it has 180 watt-hours of capacity. So the camera could run for 4.5 days on it. Add a small solar panel and you’d be good for much longer. Add a medium solar panel and it would run forever on a smaller battery that can at least carry it overnight.

After 1.5 hours exactly, the total consumed power was 2.468 watt hours or 486mAh. That’s 1.65 watts per hour, which jibes perfectly with the math above. So both in theory and reality, you can use these numbers to calculate battery/solar needs. 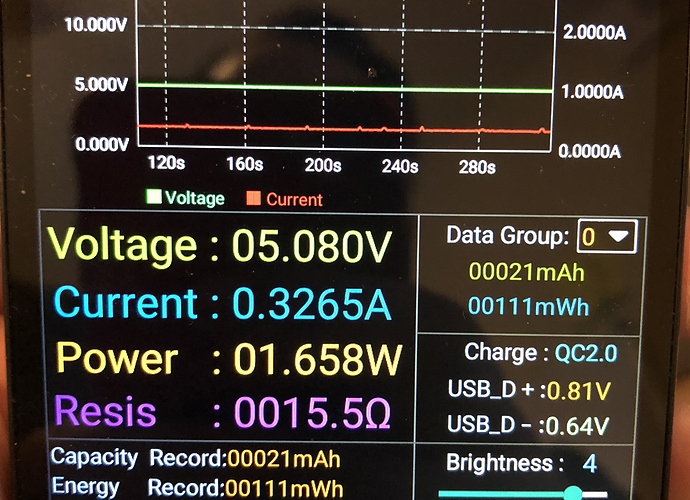 Great info and concise write up , thank you! Hope you have a chance to perform similar tests on a pan model

As soon as I get one, ordered yesterday.

Just a heads up , you may want to remove the image above and purge gps and exif data from it. To that end perhaps disable geotagging alltogether unless you know its there and not a concern.

I live at 7149 W. Ashby Dr. in Peoria, AZ. Come by and have a beer. Zero concern. While I appreciate your intent, I've never understood the fear of someone knowing where you live relative to your online persona, outside of maybe posting about having super-valuable stuff.

EDIT: And especially on a forum talking about how many cameras I have… hah

LOL I agree with you but you never know; many people post and do not realize they are advertising their location lol Just trying to keep an eye out for ya

If it is constantly panning searching for motion we can get an average consumption rate that will be likely max usage rather than find me/follow me and stationary return.

Yes but that wouldn’t be average use. If the motors were “constantly” being used they’d probably burn out in short order. Might even void warranty and determined as abuse.

But feel free to test their longevity, that alone would be interesting

Much like a night mode test, the data can be acquired and then used to calculate your own usage needs. A camera outside will have different night mode usage times than a camera in a garage, for example.

And I didn’t do the night mode test because I had other stuff going on, but soon. I guess I could stick it in a dark room.

I predict that the motors will use very little power. I did a test on a high speed, high end camera (Q6045) that did use quite a bit of motor power, but that’s a bit different. Also the biggest power user in those is the heater to keep the dome from fogging.

The pan/tilt model just arrived, and it’s plugged in to the power tester. It uses a bit less power when not moving. Looks like it’s idling a little under 1.5 watts. Pan and tilt each double that to about 3w, and doing both at once jumps it up even more to just over 4w. But of course, that’s only for the very short time that it’s moving.

I went to Peoria HS '69-'74 (83rd just north of Grand Ave). When I lived there, most stuff north of Bell Road was bare desert. When I visited a year ago, I could hardly recognize anything.

Obligatory “I feel old” post… Yeah, this area has grown like crazy. Part of what I like about the area we moved to is that we are surrounded by BLM and state trust land, so they can’t build any more unless they manage to buy it and get it rezoned. Until then, we get to live at the edge of the desert.

This area didn’t exist at all when I moved to the Phoenix area and lived in Chandler.

I’m a little surprised at this. Does your camera have an SD card, running HD etc? Whenever I grab my camera it is fairly warm to the touch although I have to say I don’t know what 1.65W feels like. Thanks.

It is set to HD. Good point on the SD card, my tests were just the camera without a card. It seems to drive up usage a very small amount, like 0.1w while recording, and no real change when not recording.

I just looked up the spec on Sandisk cards, and voilà…they specify 0.1w for writes.

Oh, as far as heat, while that’s a very small amount of heat at any given moment, it’s in a small closed box, so it builds up. There are holes in the bottom, probably for the speaker and mic, but no air holes at the top for convection. So all heat must use transfer instead of convection. When upside down, there may be slight convection.

Thanks. If you ever repeat the test turn on motion detection and any other bell and whistle to see if it makes a difference.

Edit: Also turn on the night vision mode too!

There are holes on the back near the top, so those look like they could provide convection, assuming the base is not folded up against the bottom.

Yeah, that could be true. Either way, it seems to work fine. I have one outside on the patio right now, and it’s 109 degrees here.

I’ve had a V2 in my attic for several weeks. Peak up there was just over 132 today.