i own half a dozen of these wyzecams. i’ve read how people fret about shielding the camera from the elements with an outside placement, knowing full well it was never intended by wyze for such use. well, i decided to throw caution (and the warranty) to the wind to find out how durable these little cameras can potentially be by mounting one outside with little protection from the elements.

i decided on placement by my outside deck near the outlet close to the ground. here is what i started with: 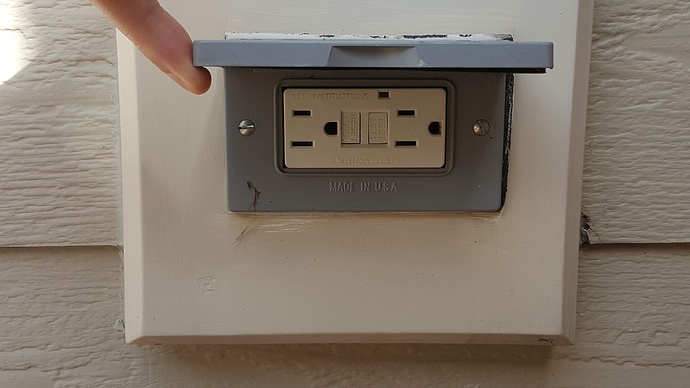 i replaced the standard outside cover with a while-in-use outlet cover. i selected a low-profile model which faces the outlets downward and had to use a shorter white cube usb charger, but the supplied wyze charger will fit in the standard profile models. replacement was simple and only required removing 2 screws. 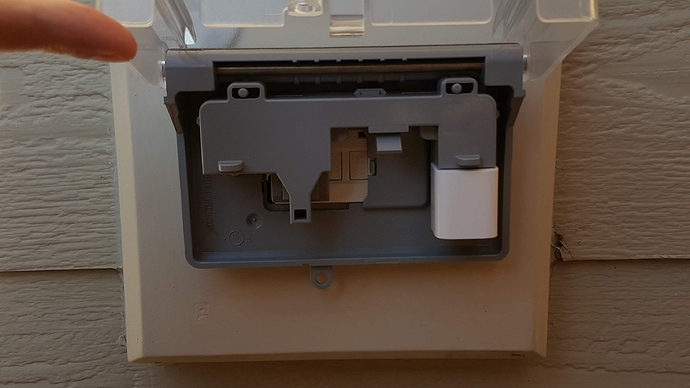 i attached the wyzecam using the magnetic mount with the supplied 3m vhb tape. this area is subjected to crazy severe winds (enough to blow resin chairs over a 3ft railing) so i’m a little worried it may regularly get moved out of focus despite being close to the wall. 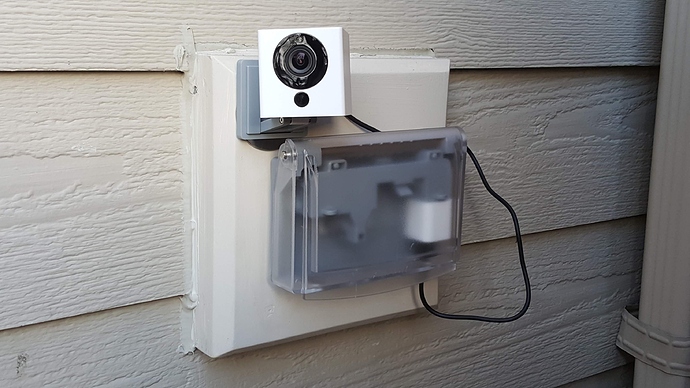 i didn’t buy any covers or outside mounting kits, nor did i tape up any openings, so the only protection from the elements is a roof overhang and an adjacent grill. 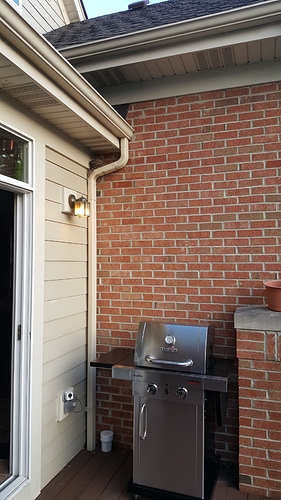 so far the camera has been online since may 5th in the chicago area and it has been raining constantly. 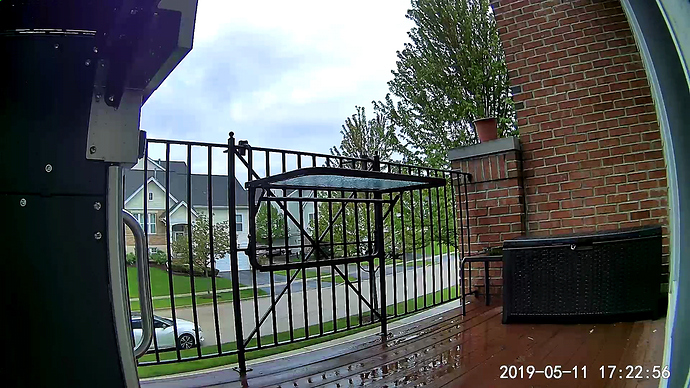 i’m curious to see how long it will keep going although i suppose the real test will come in the wintertime supposing it makes it that far. i’ll update if there are any significant developments.

I would be more concerned about people bumping into it when cooking out.

Just swap the outlet for one with two USB ports (as well as the two 110 outlets) and you could have saved some trouble.

I’ve had one on my front porch about 8 feet up on the side of the house. Had it out there since December of 2017, it’s still working!! Temps here in the winter get down to the 20’s. Couldn’t be happier with these little gems!!

I have had wyze cam for more than a year and I live in canada with crazy cold winter. My cams are outside with no specific covers or anything, they work just fine. They are under the eaves that’s the only protection from elements. For 20$ i would buy new ones every couple of years if they break

I doubd that weather will be a problem. Mine have been up for a year with lots of rain and wind, no issues. Fixed mounts are utilized to keep my cameras aimed, and stay aimed - even when dusting them. If you search L bracket mounts on the forum, you can see what they look like. I have sketched in a suggested bracket.
Victor Maletic 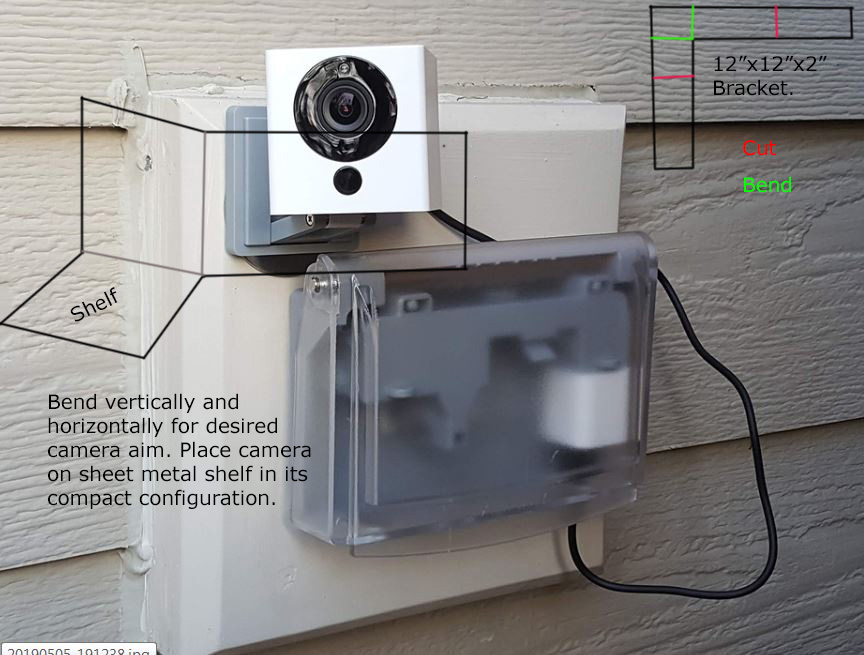 I’ve been testing one since the start of last winter here, purposefully subjecting it to whatever nature throws at it. No shielding on the USB wall wart (sits on the deck), cam pointed skywards. NO issues at all, SDD card works flawlessly as does all other functions. Dang good camera in my opinion. 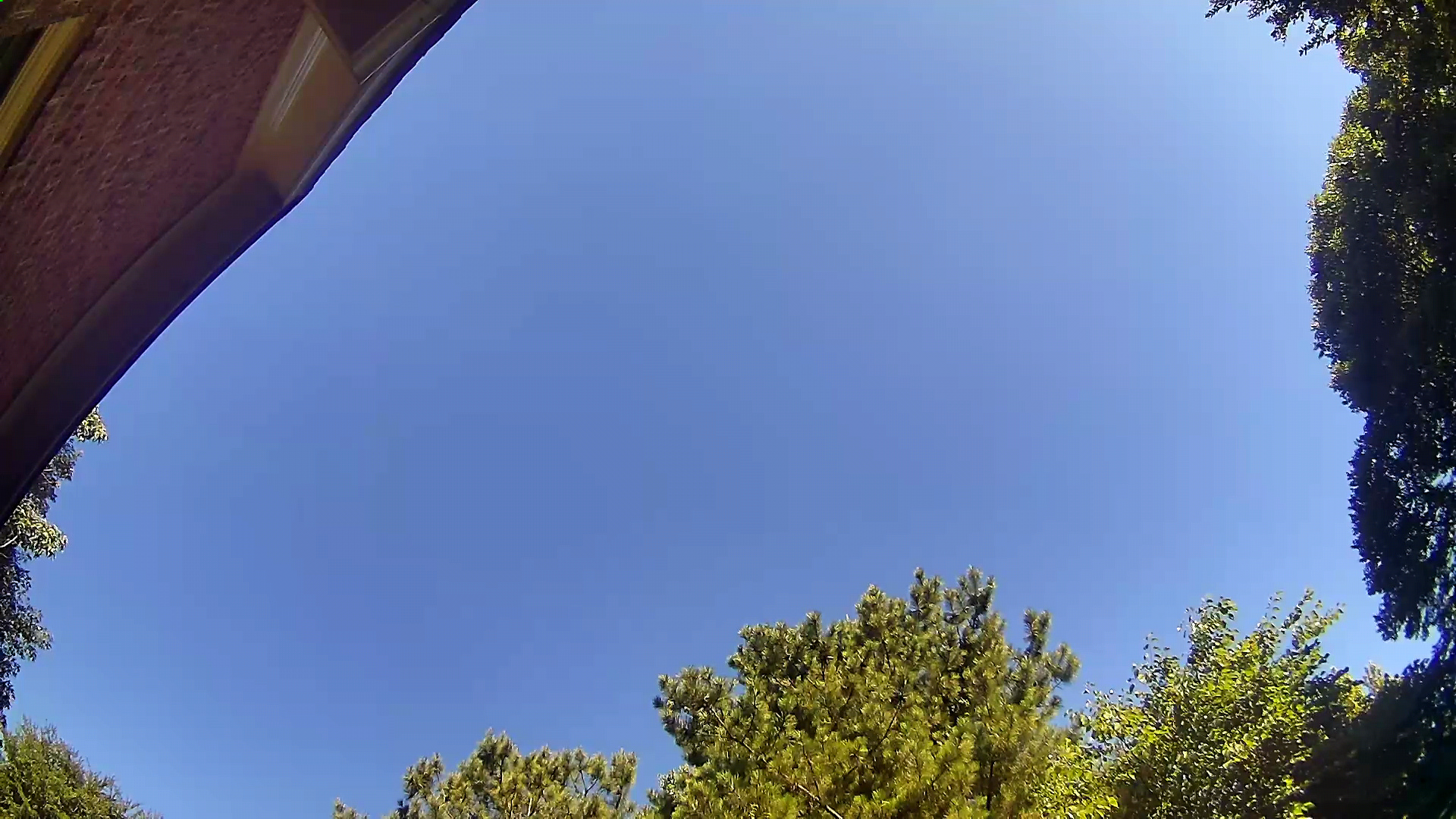 I’ve been testing one since the start of last winter here,

Charlotte NC. We had an exceptionally wet winter by all standards. Temps from the teens then to the mid 90s now.

After sending my reply to you, I came across geminiii’s response. So now I suggest another slightly modified mount that moves the camera towards the corner a little but still keeps the desired view. I also added some photos of a screw attachement that I used for a low camera in my back yard. I have used these L-mounts for many cameras without movement issues. You obviously care about the appearance of your intallation as seen by the nice details.
Victor Maletic

After sending my reply to you, I came across geminiii’s response. So now I suggest another slightly modified mount that moves the camera towards the corner a little but still keeps the desired view. I also added some photos of a screw attachement that I used for a low camera in my back yard. I have used these L-mounts for many cameras without movement issues. You obviously care about the appearance of your intallation as seen by the nice details.
Victor Maletic 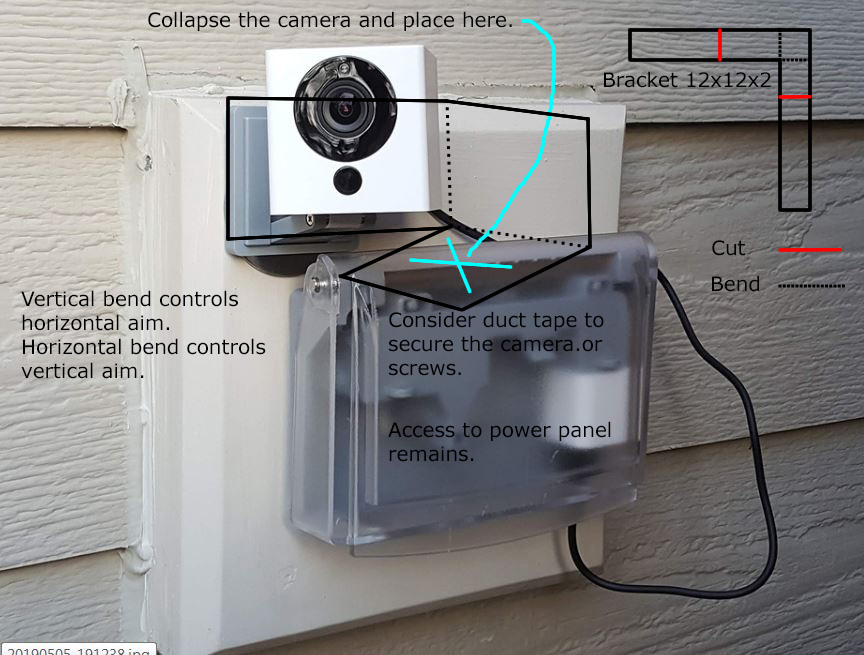 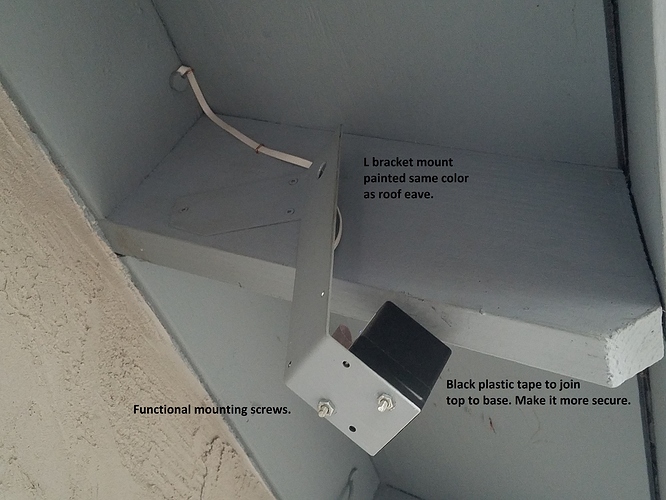 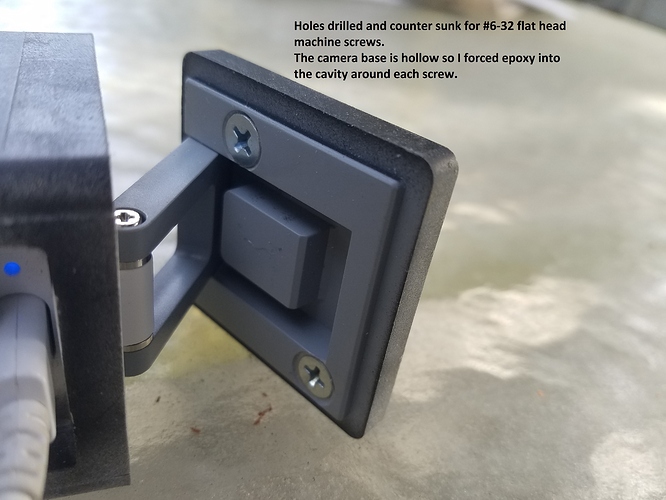 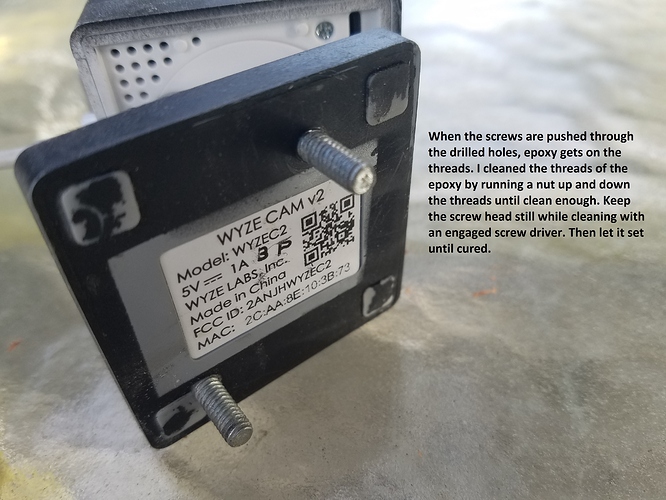 I like your suggestion for the mounting bracket. I would have to utilize your first design as the second would block the operation of the while-in-use cover. as it stands now, the aim of the camera has not deviated from its original placement, but I don’t have supreme confidence that this will remain so. I can see mounting the bracket to the wall with 1 screw, but then relying on the camera’s magnetic mount with a supplemental neodymium coin magnet on the opposite side of the bracket to keep it firmly secured (possibly even coat the base with a tacky paint for even more hold against sliding around).

the only substantial problem I’ve encountered thus far is with flying insects setting off motion detection alerts at night. I tried turning the motion sensitivity way down, but the only solution that worked was to turn the night vision off completely and rely on the outside light. I subsequently discovered that I can turn off the ir leds to avoid illuminating insects and still keep the night vision, but I think I still prefer the ambient light mode. 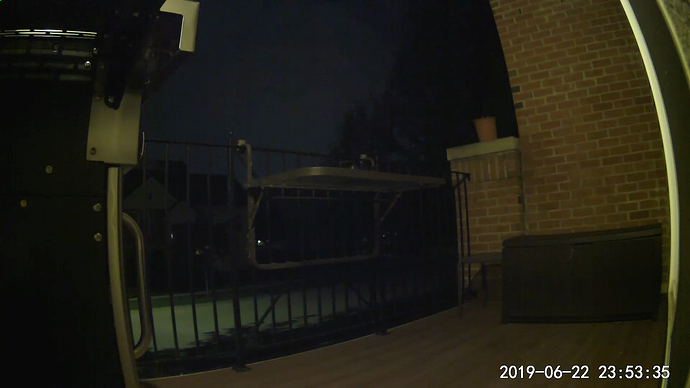 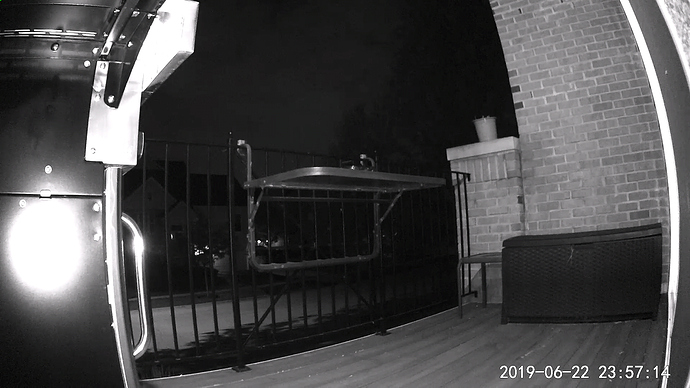 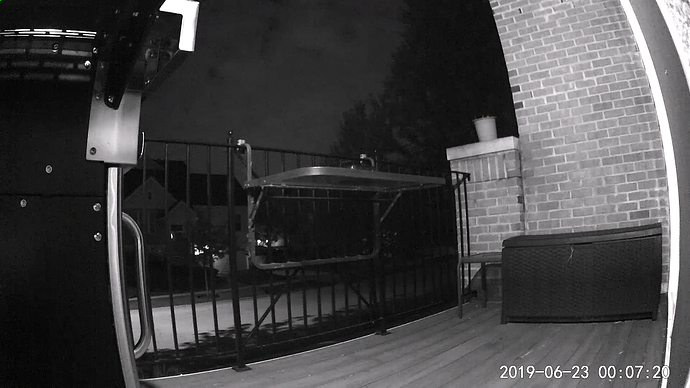 actually, now that I look at your diagram again…neither design would block the while-in-use cover. I’ve actually had 7 people together out on that small deck repeatedly for smoke breaks and nothing has happened to the camera.

My outside cameras have also recorded nightly bombing runs of insects. That went away after installing a WYZE motion sensor and turning off the camera’s motion sensing.
I was curious about augmenting your camera’s magnet with a helper magnet. I don’t think it will help based on a garage experiment A counter weighted lever was set up to pry a magnet off a steel plate. Case 1 was the pry magnet plus a helper magnet. Case 2 just a pry magnet. For both cases the pry magnet let go at the location along the lever. See photos. 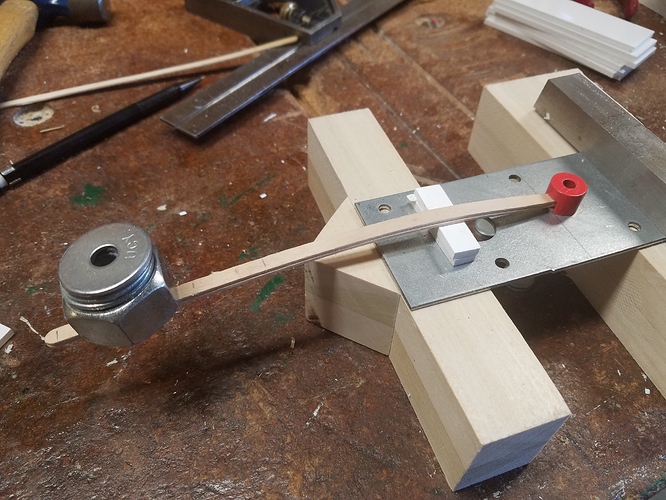 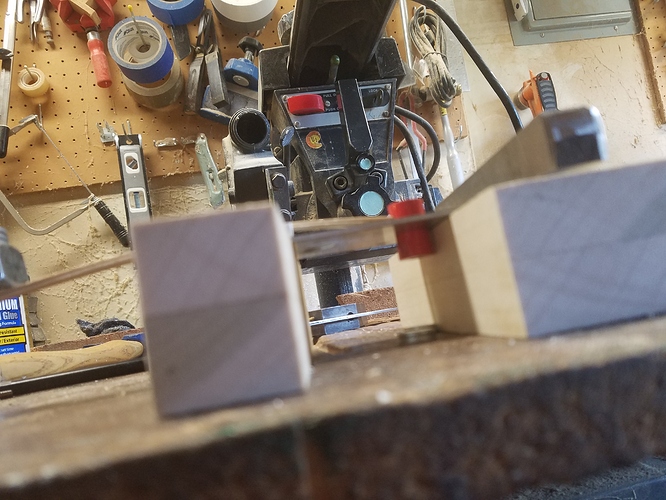 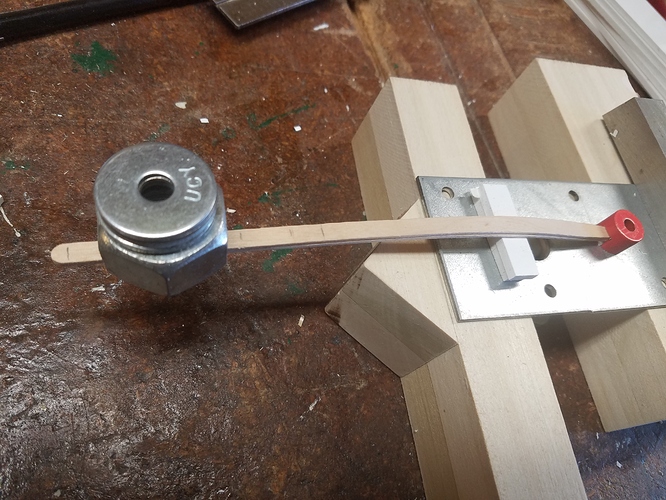 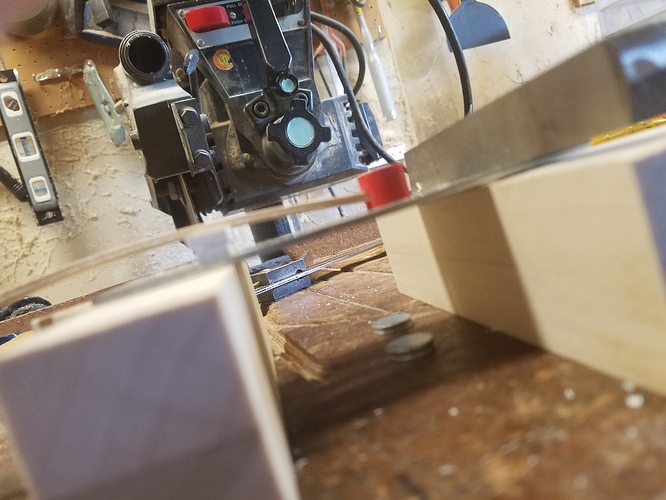 did you use rare earth magnets in your test? also, i would think that a metal bracket higher in mass/density would also contribute to more holding power. I’m just guessing at the science though.

I placed the horse-shoe magnet
on top of a 1.5" steel plate and a steel washer under the bottom surface about 1/8" away. not enough
force to lift the washer.

I hung the magnet with its keeper bar in place and noted that it did not pick up the washer which
was about 1/8" away.

I placed the magnet directly on a scrap piece of bracket steel and the same affect on the washer.

In all three cases there was a hint of magnetic force but only a hint.

The magnet provides a stronger force on the thick steel than it does on the thinner steels. It seems that the steel directs most of the
magnetic force is mostly shunted the body of the steel with very little avaliable beyond it; so a
second magnet on the bottom side would contribute little extra holding force. 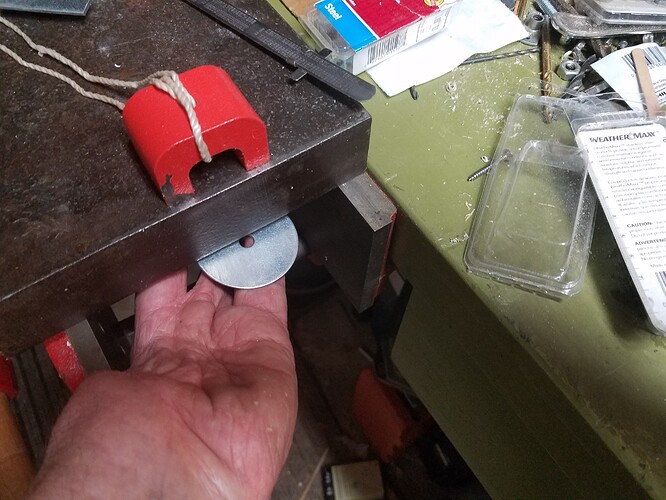 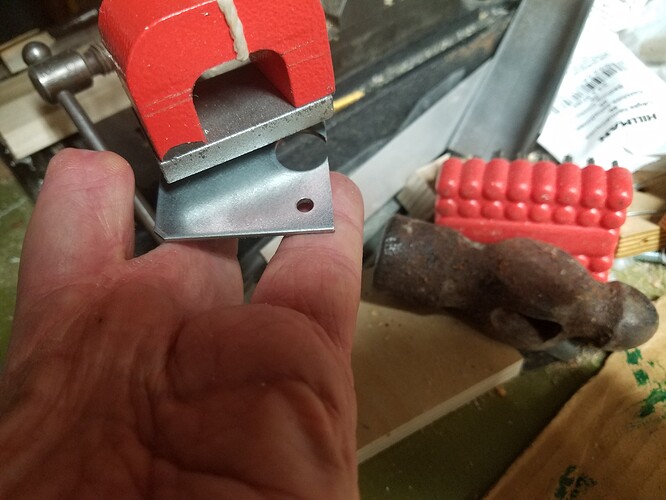