They indicated that it had to be hard wired from the very beginning. Maybe you missed it.

I love my Wyze Divices BUT…
When will you fix the camera rotation issue for Alexa screens? The image is still comming in on its side? And I’m still not able to speak to a visitor through the echo divice the way I could with my Ring doorbell.

So far Im very happy with the Wyze doorbell. I do need to add a second chime I think, but overall its been good. My only critique would be that having better volume level control of the chime would be nice. Even at the lowest setting its pretty loud to me.

One additional request of Wyze would be a ‘mild angle’ mount. In my case, the flat mount doesnt capture the full porch. But the angle is too much. So a slightly less angled mount would be fantastic.

Plus one for both of these features. Also to rotate properly on a smart device. My Amazon Echo shows the doorbell rotated 90 degrees clockwise.

The WYZE doorbell is not working as expected. I have a choice of black and white high quality images or lousy quality pink hued images in daylight.
I reinstalled the doorbell and the pink hue disappeared snd I was able to get beautiful images…but no sound!!! So, I have the choice of a doorbell that actually rings or a beautiful true-to-life image! This is NOT acceptable!!
At present I have a sometimes working thermostat snd a less than desirable “working” doorbell.
I want to return BITH for a full refund. However, it’s near impossible to get any information from WYZE Re: how to return items for a refund.
I love my indoor and outdoor cameras but I’m gone buying anything more from WYZE.

I have installed the Wyze Doorbell and it has a good picture in color by daylight or in sharp black and white at night.

I have run into a big problem- there is a tree limb in the camera’s field of view that blows around in the wind and often sets off the motion alarm. It would be nice to have a settable custom “motion exclusion zone” available similar to the settable custom “detection zone” that you claim will be fully operational soon (with the next basic Wyze app upgrade?).

Also, I don’t have an existing wired doorbell system, so I had to order a transformer to power the Wyze Doorbell. Why doesn’t Wyze offer a suitable transformer for a reasonable price as an accessory?

One more item I would like to see as an original (or reasonable cost accessory) item for the doorbell is an aimable wedge mount that could more precisely aim the camera at the desired overall viewing area.

Thanking you in advance for your anticipated prompt reply. 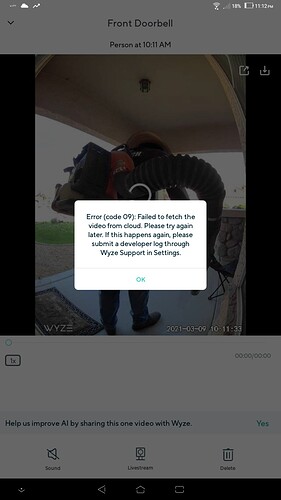 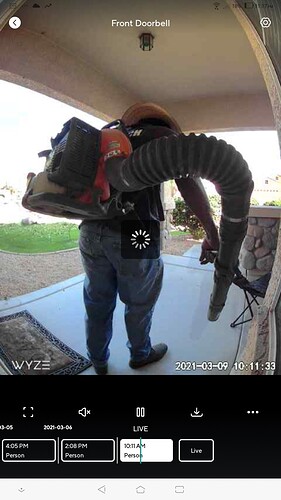 instead of an error 07 now after update i get an error 09 when trying to play back events, doesn’t matter what I do, factory reset, update to my phone apps… all I can do is play live on my doorbell it’s a waste of Cam Plus my events work on all my other devices just not doorbell

How long before streaming video to Google Displays starts working. Currently all you get is a static picture. 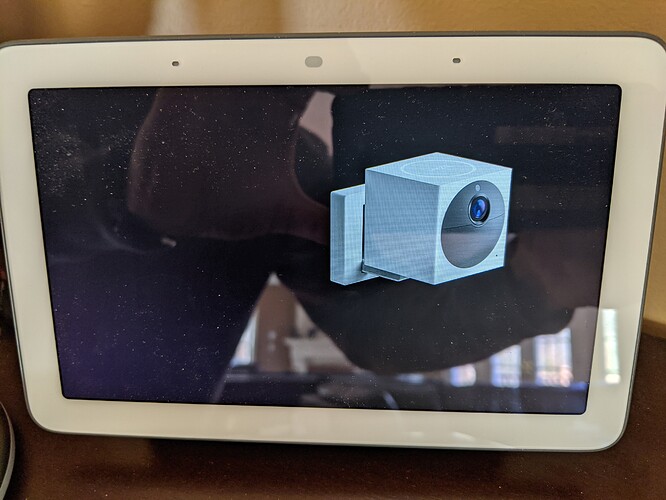 PXL_20210312_1530563274032×3024 3.08 MB
This kind of defeats the purpose of replacing my Hello Doorbell. It would also be nice if there was an SD card to allow for 24/7 local recording or at least allow for 24/7 recording with Cam Plus. My Nest Hello Doorbell subscription records 24/7 and allows me to scrub through quickly. Announcements through my Google speakers would also be nice but Tasker has a finicky work-around for this. Better overall Google display for all of the Wyze cameras really needs to be implemented. I currently use TinyCam Pro because streaming to Google devices is significantly delayed and doesn’t always work.

I’m really confused when people replace expensive devices with cheap devices and expect the same or better functionality… the doorbell you replaced costs about $200 more than the wyze doorbell, what did you expect?

I expect it to stream to my devices. Everything else was a request/suggestion on how it could be better. Nothing more nothing less. As you can see I like Wyze cameras but also have Foscam, Blink and Yi and a handfull of others. If it streamed to my devices properly I could replace my Hello Doorbell and it’s subscription with the Wyze doorbell and their cheaper subscription.

I installed mine today, and am in love. People keep walking up to water my door, see the camera and nope out.

The doorbell cannot be streamed right now because of the aspect ratio is messing everything up causing it to be sideways. I think its being worked on but might be disabled all together if they can’t find a way to fix sideways video because of aspect ratio on doorbell is 3:4. 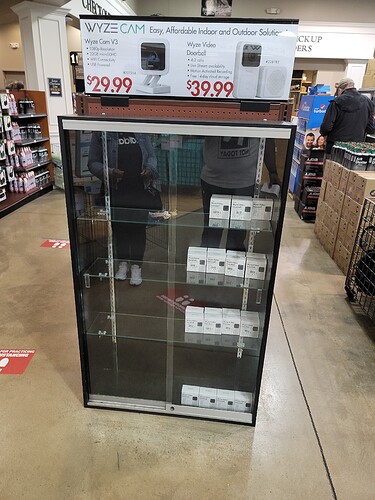 Is there a technical reason, is there a significant cost? Why not add HomeKit support Wyze?

You may find answers in this topic:

UPDATE 12/16/19: UPDATE 6/24/19: This is under strong consideration and we’re investigating it. This probably won’t happen soon, though. HomeKit is Apple’s software that allows for integration with smart home devices. This would allow automation and voice control with Apple products. Best, WyzeGwendolyn

Bought a lot of the Wyze products and was impressed at first, but tings have been going downhill. The latest fiasco - Pre-ordered the Doorbell on 9/23/20 and it arrived 5 months later on 2/23/21. Installed it per instructions which went pretty well, Wyze does put out good step by step in-app guides. Right away noticed the audio was a hot mess. Next found that if you try and do a video chat with someone at the doorbell it freezes up and is non-responsive for ~30 seconds. Opened a case on 2/25, back and forth emails with the Wesley Wyze Wizard providing information, but never any help with troubleshooting the issues. It is now 3/13, two and a half weeks after I received the doorbell and opened the case; yet no help. Last response from Wyze Wizard was 6 days ago to tell me “I am sending your information to a higher-up.” This is the last in a string of disappointments from Wyze and the last product I will be buying until the company fixes their issues. I feel embarrassed that a year ago I was recommending their products to my friends.

I totally agree. I was delighted with the many WYZE products I bought in the past. However, my recent purchases have been a hot mess! The doorbell either has a pink hue during the day or no sound. The thermostat does not function properly! Both issue have been reported and I’ve yet to get adequate help! I’ve done everything suggested snd still both devices are not working properly.

After many attempts, I can now get the thermostat to work but only if I stick to using the settings on the device itself. That means I cannot use wifi on my smart phone to make adjustments to the temp!

I’m done with WYZE! They’ve rushed all their various new devices and are interested more in increasing sales and not on satisfied customers or customer support.

I’m now extremely sorry for recommending WYZE to my friends and family.

They should easily be able to stream it as a stretched distorted image for now. If TinyCam Pro can figure this out I can’t imagine that this is very difficult to implement. This is how it looks on my Chromecast with Google TV. You can see the doorbell image next to a regular V2 cam image that I had previously setup and use for 24/7 recording since the Video Doorbell doesn’t have it. (They really should put in an sd card in the next model or allow for 24/7 recording with Cam Plus.) The image is stretched out but usable in the grid view and has the correct aspect ratio in the individual view. 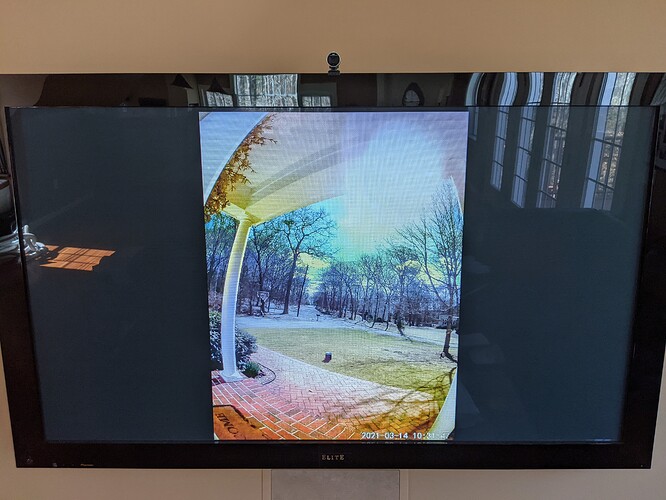 Great that there was an update, but I can’t get anyone to respond to my support request. Sent 5 requests so far… Brand new doorbell that hasn’t worked properly yet. I know this is just a release thread, but hopefully somebody at wyze takes notice and actually helps me. A little tired of the pandemic being blamed for slow support response times. Having enough staff to respond to requests this far in isn’t really a valid excuse.