Senor is toast. Time for a replacement

Wow, that is strange. Request a replacement.

same issue here. I believe it started after FW update to the recommended v4.25.0.222 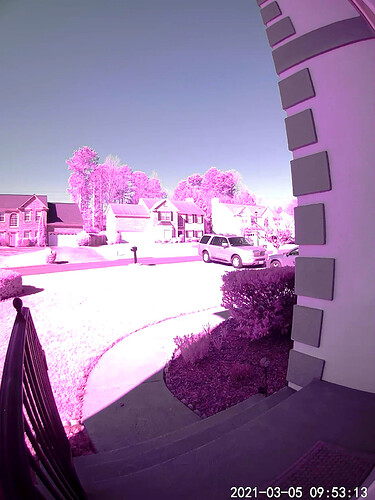 Does anybody have a solution for this issue?

That looks more pink and pastel than a 24-hour long vaporwave youtube vid. I’d get my doorbell replaced or at least contact Wyze support if I were you.

Same issue here - sent a note to Wyze support, waiting for a reply.

The CMOS video sensor “sees” in a wider spectrum of light than your eyes. At night, this is good because when visible light is missing, the camera still detects infrared.

But in the daytime, the camera needs to have an IR cutout filter between the lens and the sensor otherwise you’ll get odd pink/red images.

I had an Apple iSight FireWire camera (ask your dad) and a common hack twenty years ago was to remove the IR filter so you could have low-level night vision.

So, your problem is the filter is stuck. If you have experience with the v2 cam, you hear the click when the solenoid moves the filter in and out of line-of-sight when switching between day and night (whether you have the IR illuminators activated or not).

It’s a hardware failure. Ask for a replacement or your money back. 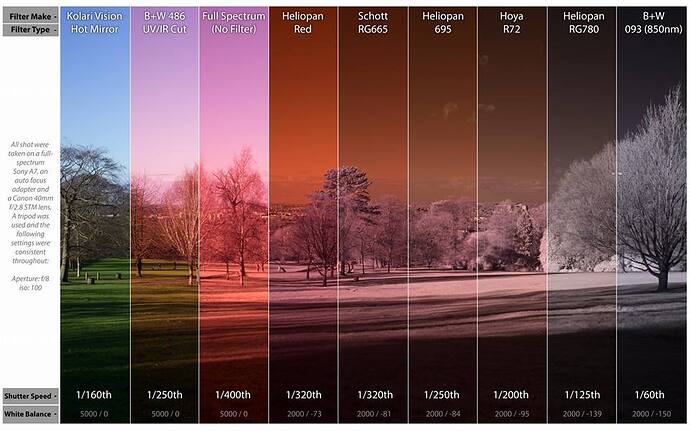 Sensor is fine. Filter is toast.

Wow. Great info. Feel a little smarter after reading. Thanks!

@chrisjost You are right - my picture looks exactly like the segment with "Full Spectrum (No filter) in your diagram. But I still believe it had something to do with the FW - probably the toggling of that filter is managed poorly. I am saying that only because today I’ve got a notification for FW update to 4.25.0.233 and after the update, the doorbell seems to be OK. I have requested a replacement already and currently I am expecting it to come but at least for the few hours since the update, the old one seems to work OK… or it maybe just multiple switching from night to daytime mode removed whatever debris were in the filter 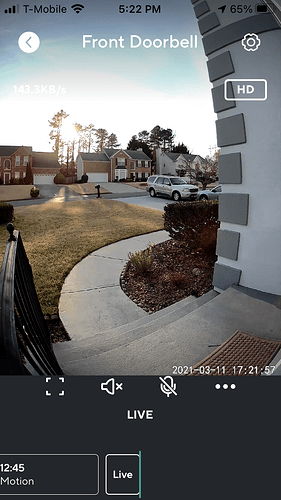 Yes, it’s possible there was a problem with the firmware activating the filter. However the reports are few so I’m going with Occam’s Razor here.

“If you hear hoof beats, think horses, not zebras”

I guess that depends on where you are. Where I live the hoofbeats are more likely a herd of elk!

Same issue. Support is MIA. I’m doubting my decision to back Wyze on the doorbell as there are so many issues.

I finally got mine to work with correct color. I had tried all the things that support suggested, and had already started the replacement process, when I decided to try one last thing. I took the camera off it’s base and pressed the reset on the back of the cam a couple of times. That meant I had to redo the whole setup process, but when I was done it all worked as it should! Now if we could just get the Alexa app fixed…

Yeah I have been waiting on support too. But I will try to reset like

I have done a full reset 3 times. Still have the same issue. It’s definitely defective. It is so difficult to get actual support from Wyze. They need to make it easier for customers to get replacement devices.

The fix lasted me just long enough to cancel my request for a replacement. Now it’s pink again, so I will have to restart the process of getting it replaced .I have had similar problems with Night Owl security cameras and different manufacturers back up cameras, so I don’t think this is a problem just with Wyze cams. At least with this one it happened before the warranty expired.

This guy knows his stuff! I’m looking for an older type usb cam or maybe repurpose a Wyze cam as a hidden camera finder/IR light detection device. As soon as I saw OPs pics I knew this was the problem.

Hello People.
Several weeks ago while repositioning an operating V3, I dropped it. I then accessed the Wyze app to see if the camera was OK. It was not. The camera’s field of view was pink-tinted. I rapped the camera with the back of my little finger a few times to see if the pink would go away. I then unplugged the power cord, waited about 30 seconds, and repowered the camera. The camera’s normal images returned, and have been so ever since.
Victor.