I’ve been unable to use my subscription for over a month now. I can’t watch my own stream. V2 camera. Their support just ignores everything I say and sends me the same basic troubleshooting over and over. It’d rather pay more if it meant I could actually use my product. I’m about ready to cancel my Wyze subscription and find a different security camera.

Did you look on the app and see if the subscription is there? 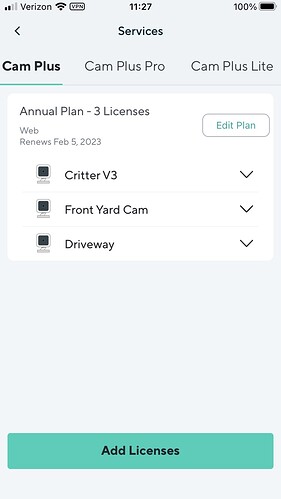 It’s working as intended on my wife’s app.

I’ve uninstalled and reinstalled. I’ve deleted the device and brought it back in. I simply cannot watch the feed.

I’m using the iOS app with an iPhone and iPad with no issues. You need to hear from a Android user I guess.? I know there were issues with the app and some old versions of Android. From an old post.

Don’t worry too much about it. RTSP probably won’t affect you at all. To overly simplify what they’re talking about in a way that’s easier to understand, “RTSP” is like an EXTRA special type of program some people like to install on their cameras so they can use them in a different way than everyone else. It lets you record video onto your computer easily, or connect to the camera locally through your router instead of going through the internet, and some stuff like that. It is something most …

It’s working as intended on my wife’s app.

Does the V2 camera show up as a device on the home page of your app? If so, what happens when you tap the camera picture?

It’s a very new phone and the modern version of Android.

Yep. She has the Galaxy S21. I have a Moto G5 Ace. It worked fine on mine until last month. Everything is updated.

It shows on my list of devices. When I click on it, it says “Connecting camera by secure chanel (1/3)” and eventually “Connection failed”.

If your wife has no issues viewing your cam, you most likely have an issue with your phone’s network settings. If you’re running a VPN on your phone, try turning it off.

Another possibility, especially common for users trying to access cams from a non-US based location, is being forced to use IPv6 as an APN protocol (Wyze app supports only IPv4). From your phone’s network settings, see if APN is set to IPv6, IPv6/IPv4 or IPv4. If it’s set to IPv6, try going into your APN settings on your phone and disable IPv6

I’ve been unable to use my subscription for over a month now. I can’t watch my own stream.

The viewing of a live feed is a basic function of the camera, no need to have any subscription to anything to view the live stream by itself. The subscriptions come into play when you want a cloud recording/ai/ solution. Are you have issues with any cloud recording? Or is it just viewing of the live stream? Like @Seapup stated, sounds like a VPN or some network settings on your phone is causing the hangup.

Are you in a different wifi network perhaps, one that may disable some ports or anything than your wife? Only other thing I can think of is being on a network that firewalls out the Livestream from you.