WYZE rotate image NOT leaving with next app update?!?

Just formatted the SD card on my WYZE Pan (we have on the front porch mounted upside down), and the app alerted me that they’re getting rid of this feature in the next app update?!?.. WTF? Is this to being depricated, and put behind a pay wall too like people detection?

As many others have stated here in the forum, I’m really starting to feel pinched, nickeled + dimed, and pushed towards paying WYZE some sort of monthly subscription fee to keep previously included, and free features, features that they initially sold me their products on… Feeling very frustrated and annoyed by all of this at the moment. I sincerely hope there is a good and valuable reason for the deprication of this valuable feature…

Mod Edit: Edited title to show current info that image rotation will no longer be removed.

Huh? Why would they do that? Can you grab a screenshot of the warning?

I got the same notification as well, & feel the same way. I have two cameras mounted from the ceiling and this will be my breaking point with this company. I’ve already gotten rid of my wyze bulbs, plugs, and contact sensors because of reliability issues. I’m tired of constantly having to tinker and spend time getting these products to work. The only thing I didn’t have problems with were the cameras, and now they’re doing this. It’s not a simple matter of just moving the cameras wyze team. Holes drilled in the ceiling for mounting these cameras will have to be filled, then painted. I’m tired of the games this company is playing. These products aren’t sold or advertised as hobbyist kits. This company seriously needs to rethink the direction they’re going.

I didn’t even think to screen cap the message (it appears over the camera’s video feed, while viewing the camera’s live feed). I can’t reproduce it now, but as ble102 mentioned, I assure you it came up after my SD card format this morning…

I didn’t get a screen shot either. But if you go into the advanced settings it does give a warning under the rotate image setting.

Wow. What the F. Thanks for the picture.

How to mount your Wyze Cam v1/v2 and Pan

Once you get your camera set up, you’ll probably start thinking of where you want to put it. We designed the Wyze Cam and Wyze Cam Pan to give you lots of options.  To mount your Wyze Cam v1 and v... 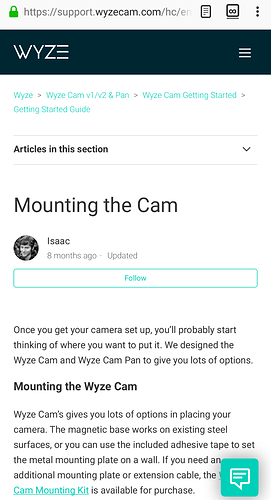 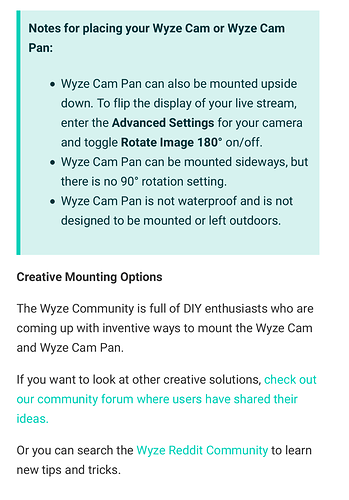 No problem, happy to help. I give up with this company. I have a family, and a life. And I am done wasting my free time dealing with constant issues with these products. Wyze is literally the only products that I have constant issues with out of over 40 “smart” devices in my home. Already ordered eufy cameras. Can’t wait to have my home and life Wyze free. Best of luck to you.

I have seen this with the outdoor camera, but not the V2, V1 or Pan cameras.
This is hat my v2 settings look like: 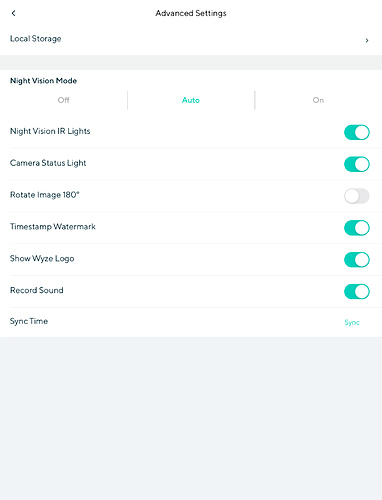 After you update the v2, it will show up as an overlay message on the video thumbnail the first time you open the app. It goes away after the first use. At least it did on mine. But it is a clear warning that the option is being removed on the next update. It would be nice if Wyze actually gave an explanation as to why it’s being removed.

I can shed some light on this one.

You may have noticed some posts about Wyze Cam Outdoor not recording Events well. There was a bug we fixed with that but there’s a larger issue with the motion detection being tied to the hardware instead of being a pixel comparison algorithm like with Wyze Cam v2 and Pan. When you have the camera upside down, the field in which you’ll best be able to detect motion is different than if you had it right side up using the magnet and metal plate at the top of the camera.

We were planning to remove image rotation feature in an effort to improve the detection experience for folks. I’ll give this feedback to the team so that they take it into consideration.

Edit to add: This is only planned for Wyze Cam Outdoor and not Wyze Cam or Wyze Cam Pan. Are you seeing that message in their settings as well?

Maybe the rotation option could be available but with a warning about the detection issues/limits. I haven’t had issues with mine.

Thank you for checking in Gwendolyn! The warning doesn’t show up in the settings on my v2 cameras. But my indoor cameras are in a separate group on the app. I have 2 v2 cameras mounted on the ceiling. Both of those cameras gave an overlay warning about the feature being removed on the next update on the thumbnail view of the cameras the first time I opened the app. The other 3 v2 cameras that aren’t mounted on the ceiling didn’t show the warning overlay message. Overlay disappeared after the first use and didn’t show up again. I totally understand removing it from the outdoor camera, I was honestly surprised to see the option to rotate the image on the outdoor camera in the first place. I’m really hoping the warning is a mistake for the v2 cameras as I really like these cameras and would hate to go to another company. Hopefully I can cancel my order of the eufy cameras. Either way, thank you again for checking in on this subject. It’s really appreciated.

i can appreciate for wco since it has fixed PIR, but the warning is displayed on my pan camera.

Received notification for this on a V2 that is currently rotated.

PLEASE don’t take away invert mounting. That will take out several of my cameras currently and several more planned.

Repeat: This is only planned for Wyze Cam Outdoor and not Wyze Cam or Wyze Cam Pan.

Repeat : this notification showed up on 2 of my v2 cameras. And going off of other posts on here. I’m NOT alone.