For some reason I cannot install this firmware. The app says it’s available, I click update, but it spins for a bit and nothing happens. Then when I go check, it shows the update is still available so I’ll try updating again. I’ve tried installing probably 7 or 8 times with no success. Anyone else unable to update the firmware?

Mine updated OK this morning. After the update I kicked off a manual cleaning of 3 rooms. During that I paused/resumed it once to sweep under some bar stools and once to tweak a keep out box. Everything completed as expected

What updates are included in this version of firmware?

Release notes said additional server side updates. I didn’t notice any differences in features or performance.

I was able to update. Android… but my biggest complaint now is with each update I feel like I am having to remap. With the last version I had everything working perfectly, now my WRV fails to clean 2 areas properly be it scheduled cleaning or initiated directly by me.

Still getting ghost map overlays outside of my good mapped and edited map. Cannot clean mapped, edited, specified and identified rooms without the charging station appearing in totally incorrect locations totally throwing off the map and the vacuum. Cannot run the vacuum unless I reset the map and allow it to remap the whole house again every time.

I am having the same update issue. I attempt to update repeatedly and it won’t update. There are no voice prompts or any other indications. I manually restarted the vacuum but still no success. This is on android beta app trying to upgrade vac from 1.6.95 to 1.6.97. Has anyone who had issues been able to overcome this?
Log 104888

I uninstalled, reinstalled the app. It then did the update.
Android 2.17.6, galaxy s9.

Thank you for the tip! That did the trick!

Yes, thanks for the tip, that worked for me as well!

Below is the image of a cleaning in Room 2. As you following the arrows you can see that the vacuum left the docking station (yellow square). It proceeded to head toward a chair I placed in its path on purpose (red square). For some reason it proceeded to the virtual wall instead of maneuvering past the chair., maybe to start on the other side of Room 2. After leaving the virtual wall it went back to proceed to Room 2 but starting the lines on the map in the middle of the Room for some reason instead to starting lines once it entered Room 2.

The vacuum did get confused trying to navigate between a chair and desk which was tight (bottom right of image). 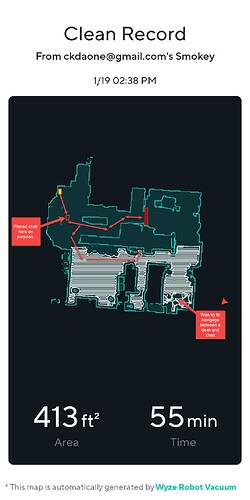 Ditto, except I had no problem for a week straight when I first got it-it worked flawlessly. Now I have to delete the map every night before it’s scheduled to run and re add all my virtual walls after it starts.

Same here. It’s getting old having to start over every time. I keep hoping that they will fix it so we can schedule rooms to be cleaned as it is supposed to do.

Ok i have a map of whole home now with barriers and rooms split and labeled. Sure would be nice to be able to save a copy in case it disappears. Could also be labeled as main floor and have option for 2nd floor soon. Using ios.

After a few weeks of testing it appeared my house was finally mapped correctly. After some splitting/merging etc I finally had a useable map. I had a few schedules set up and also would manually select rooms. Aside from it continually getting stuck trying to climb bar stools, it was finally working as expected. I went to select a room this morning while logging into work and the map is gone. I used it yesterday with no issues. The thought of remapping is a bit daunting. It was taking 2-3 charges to finish a map and would get lost returning to charger. My android app is updated and vacuum version is 1.6.97
UPDATE 8AM - single room schedule kicked off…was curious what would happen and the map re-appeared on the app as the vacuum was headed to the room…

@bubbypuffer Have you tried the Quick Map option yet? It maps my entire first floor (about 1000sqft) in 13 minutes with the vacuum off so it’s quiet while it’s doing it. It has worked really well for me.