The closest I can get is two separate doorways in two different rooms in this example.

You can do it with lots of patience. I have smaller rooms, like the bathroom in below picture and was able to split everything the way I wanted. 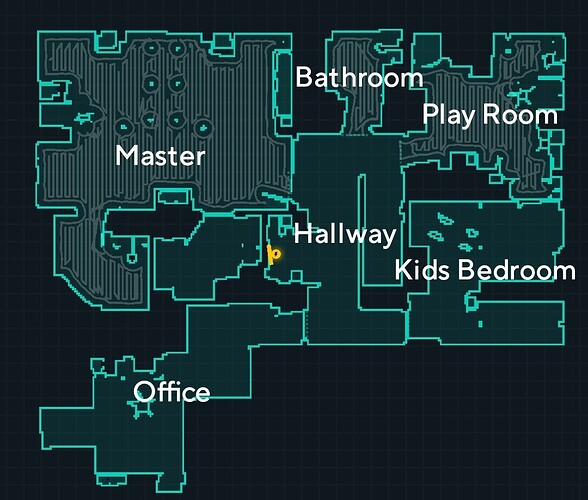 UPDATE: I see the color of your inner walls, so I get what you’re saying, now. That sucks

Just a silly question. But are you working on a motion activated squirt gun mounted on the vacuum to deter my cat from playing with “Rosie” while she is working.

Thanks for the update

you are 100% correct. My kitchen is ‘open concept’ into the family room and only has a half wall separating the two with an open floor plan otherwise. The mapping is unable to allow me to add a room separating the two and just views it all as one big room

That’s nice and all, but this crap about adding Alexa without adding Google ain’t gonna fly! Every other “Smart” device can incorporate them both at the same time, what gives with Wyze and Google???!!!

Every other “Smart” device can incorporate them both at the same time,

There are two different integrations that can be developed at different times. If you’d like to see Google added, be sure to vote on this thread like I did

I am hopeful for some simple Google integration for the new Wyze Vacuum. I had a robotic vaccum where you could say "okay google, tell _____ to start cleaning, or tell _____ to dock. It is a really nice convenience feature.

Yep. For those of us with this mapping issue we can’t even send the thing to a particular room to clean.

Don’t understand why that hasn’t been fixed before they go after stuff like this. Basic basic basic stuff.

Done! I remember years ago when remote control ceiling fans became available. I told my wife that would be the height of laziness.

In addition to 4 remote controlled (Hubitat) fans, now I requested access to be a beta tester for something that will allow me to have the house vacuumed without lifting a finger. Yes please. And I echo the suggestion after the Alexa integration has the bugs worked out, that Google integration is next. Heading to the wishlist…

Don’t forget to vote here if you didn’t already

Although an open Wyze API, would suffice.

Many of us are moving away from Stringify and towards services like Hubitat. I found Wyze from your IFTTT support but that tool is too simple for real automation. Can anyone comment if Hubitat support is in the works?

@WyzeHongfei once the beta skill is enabled, will there be a beta firmware that goes with it too, or everything is done on the cloud side?

It is currently in Beta. Here are a few screen shots

When I ask Alexa to ask WRV to stop it replies it has been stopped. It takes 5 seconds or longer which I think is just fine. Maybe Alexa should reply I have asked WRV to stop cleaning and return to it’s charger.

@WyzeHongfei
How can I get an invite? I filled out the form on the first day but have not heard back. This is something I would REALLY like to take part in.

Agreed, really want to participate as well. Hoping to be selected

I have the same problem. I have literally wasted this day working with the vacuum. So frustrating to not be able to divide rooms due to interior walls. I have the latest update. Alexa will not do me any good if I can’t even define the rooms I want.

I know right? Let’s add extra integrations when we can’t even get the basic functions down. Crazy they’d go after this before getting such essential functions sorted.

have the same problem. I have literally wasted this day working with the vacuum. So frustrating to not be able to divide rooms due to interior walls. I have the latest update. Alexa will not do me any good if I can’t even define the rooms I want.

Hey hey! That’s the other outstanding issue I have too. Giving up on that one.

Hey does anyone know how this is going and when we might see the feature rolled out? I’m a beta app user and when I go to run my vacuum I see the feature in the options but I obviously wasn’t a part of the beta testers so it’s just a big tease every time.

Really looking forward to getting this skill enabled.