That’s me!!! Thanks. Will verify issue is resolved.

As usual, the new firmware is not available yet. Both my outdoor outlets are showing current is 1.2.0.206 No update available. Tried from both my Android and #$%^& iPhone. Force stopped the app and tried again. Same result.
Will try later…

HMS Hub working fine. Unplugged, plugged, unplugged, plugged… no change either way and no problems encountered. I’m not a good test candidate for this iteration, as I haven’t encountered the issue that was fixed prior to updating.

Same here. Installed the FW without issues. Initial tests yielded no issues. As with @Seapup , I have not experienced the unplug issue which the HMS Hub FW update fixes.

Any plans to fix the “Tune Setting” problem? I assume this firmware doesn’t…

What issue are you having with the Tune Settings? Curious as I don’t recall having any issues.

All my sensors show “Tune” as off and I can’t really change them. If I change them to on and come back to check, they all show off again. I have two sensors where the Tune setting is on but the app shows them as off.

You are using Android, correct?

I will check mine and see.

Just found it. The issue is related to iOS only and not Android. This is why I was not able to reproduce. My Android device shows on and they Tune’s do sound. Then I go to iOS and they show off.

I had an issue where my Hub would not reconnect after an internet outage from the provider and had to reset. darndest thing. Never experienced the power issue.

Also had the same issue (AT&T Internet), I always thought it was my terrible internet provider.

Next day and still can’t get the update. Both Android and iPhone (both v2.24.41) still showing 1.2.0.206 as the current firmware version for my Outdoor outlets.

When you go to Wyze app Home > Account > About > Beta Program > Edit, do you have Wyze Plug Outdoor checked?

If yes, when you go to Wyze app Home > Account > About > Beta Program, do you see Wyze Plug Outdoor in the list of Beta Programs you’re testing? 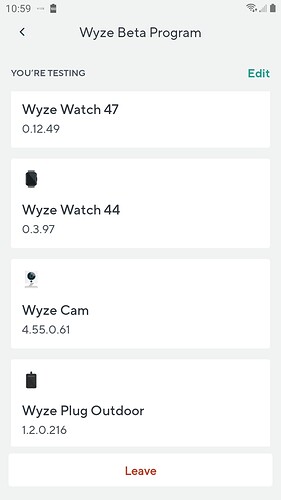 I have also found that if checked unchecking and rechecking those devices in that same menu gooses availability sometimes.

Yes @Seapup it was checked for all of my device types.
Followed @R.Good suggestion and now the firmware update shows up for my Outdoor outlets.

I have an Android phone, an Android tablet, and a #$%^& iPhone that all have Wyze beta installed. In my experience, when updates (either firmware or app versions) are announced here on the forum, it is frequently hours or days before the update becomes available to me. More of an issue with firmware updates, but sometime a couple months ago it took two or three days before an app version update actually showed up on all of them.

Installed both just fine so far no issues. Both firmware updates showed up fine under android beta.

My Outdoor Plug update installed fine, but I can’t tell if the outlets are on or off.

I just put my plug back in service a week or so ago. At that time I loaded the latest production firmware 1.2.0.206. I noticed if I stood next to the Plug the on/off controls/indicators on the Home screen did not necessarily reflect the state of the outlets. Nor did the controls/indicators in the plug-in. Further, the plug-in didn’t necessarily match the Home screen. I loaded this Beta firmware to see if that got fixed, and it didn’t. So I am here to report it.

Tried unplugging my hub and it actually stayed on!
Was starting to think my hub had faulty batteries. Thanks again!!