Wyze Plug Outdoor firmware version 1.2.0.83 is releasing today! This fixes some bugs that we found with energy monitoring.

@WyzeGwendolyn, 2 questions. First, are the plugs not able to be updated via the device update screen? I don’t see them listed there.

Second, when I go into a given outlet, it still shows the 1.2.0.73 version as being “up to date”. I am running the Android Beta version. But, shouldn’t I be able to update to the current public firmware version?

@mvb appears as if there was a change to the beta process, if not aware. I found it poking around wondering why I wasn’t seeing the beta firmware updates on the devices or bulk update page.

Make sure your have selected the devices you would like to receive beta firmware updates for by;

In the beta app go to Account, About, Beta Program, Edit, and selected the devices you wish to get beta firmware for or select all and hit save, I did this late in the evening and woke up to a mirad of FW updates.

Then went to the device and it notified me of a FW update… sorry.

Thanks for the reminder. I was aware of that change and had set up my devices that were listed at the time. I just checked it again and saw that I needed to add a couple of the newest products (even though I’m still waiting for the pre-orders to ship).

I also discovered that a new Android Beta app version was available. After that was installed, I went into the outdoor plugs and saw the new firmware version. So all is good now.

it did not help the graph 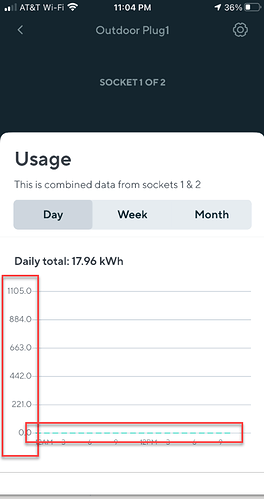 I think its in the app not Firmware…

Mine won’t re-connect to the internet and I’m having difficulty locating a factory re-set to see if that solves the issue.

scale looks to be fixed after app update , but new app still not showing Outdoor plugs in list under > Accounts > Firmware Updates (iOS)

Would dearly love to update my firmware. Problem? Plug dropped out of my wifi, won’t re-connect and I can’t seem to find anyway of performing a factory re-set. 2 logs were sent in over a month ago and I still have received no response. Plug has since been repositioned close to the wifi router with no change.

Wife is fuming that one of my gadgets is useless, and won’t let me spend more $ on Wyze Gadgets. It hasn’t stopped me, but it hasn’t been pleasant…

It would be nice to have the ability to factory reset either manually on device or in software. I have 2 plugs with scheduled actions locally with no way to remove or edit after changing phones recently. This has rendered the product unusable for my current needs. I’m pretty sure I created the bug when I setup up the plugs a second time. I believe it’s an issue with locally stored schedules. If I could just flash the plug back to stock I think my issues would be resolved. Thanks,

press and hold left power button till light start flashing blue . it takes you back to parring process …
make sure you phone connected to 2.4 before starting …

I’ll try this for the 32nd time, lol. Its been flashing blue from the start of the problem.

Who knows, maybe the 33rd time will be the charm.

Or it will cease to be relevant and I will be forced to just use it as a dumb x2 switch.