So if you haven’t used IFTTT with wyze yet then your missing out, simply put! For those that don’t know what IFTTT is well it stands for “If That Then This” it’s a organization that has a web presence that brings different companies together to form an integration of processes much like a recipe. By bringing companies together you have an endless amount of possibilities created and new applets are formed through, changes of one web based service change or influence that of another. A simple example of this with Wyze would be when motion is detected by a camera it triggers gmail to send you an email as a notification and a link to you. Or when motion is detected a set of smart bulbs like Hue or Lifx flash. It’s truly an amazing integration which is easy, fun, and free to use and I highly recommend you checking out the already developed Wyze applets as well as having fun in creating your own personal applet. So enough about what they are and more about why I’m posting. So I recently became a brand ambassador for a cool little company called Flic who has developed one of the best smart buttons on the market. In addition I have a company called AvaSquad which has a developer account on IFTTT and we make applets with new and up in coming smart devices as we test much of them ourselves for review purposes. I wanted to let my Wyze family and community know that we just released a couple of new applets with Flic and would encourage you to check out Flic as the integration that it can have with Wyze is pretty cool! How many times have you wanted to start recording for whatever reason but wanted to remain somewhat nonchalant about it? With just the click of a button you can now record a short video clip! The buttons are so small and discrete you can keep them in your pocket and record whatever whenever without the need of your phone, tablet or computer for review later.

I hope this helps you guys and if there’s any other IFTTTT applets you’d like to see with Wyze let me know and I’ll make the applet for you with the proper API’s and publish it so everyone can utilize it! Have fun, stay safe and live classy community! 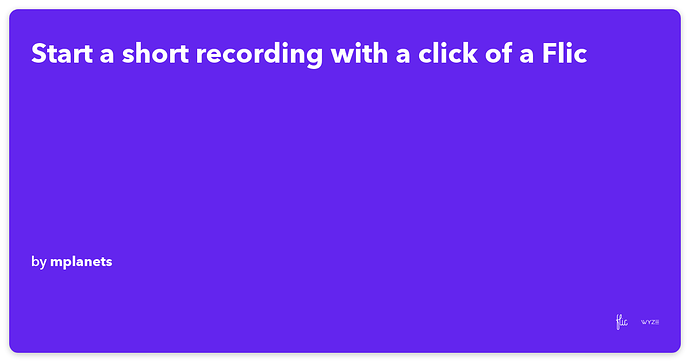 Start a short recording with a click of a Flic

Use your Flic to start a short recording from your choice of Wyze cameras. Great for those spur of the moment, priceless moments and or intimate moments that would be otherwise awkward in getting your phone or tablet out and fumbling around to catch...

Let me check on the applet and see if there’s anything that’s not right on it and I’ll get back to you!

I want to use motion control to trigger the outside Hue light to come on, BUT, Hue doesn’t seem to have a “THAT” option that turns on a light and then off after 1 min.

Once they implement THAT, I can’t wait to start using IFTTT with Wyze and Hue.

I’m looking to have a Wyze applet that would check two sensors and make an action depending on their status. In particular, I have sense sensors on each of my two garage doors. If either one of them is open I wish to turn on a wyze bulb. If they are both closed I want to turn off the bulb. A simple ifttt can only check a single sensor.

You can use the method described here to add a delay: GitHub - grapeot/IFTTTDelay

Hi Matt. I was trying to use ifttt to move the PAN on my Wyze Pan CAM and I don’t seem to find this option. Here’s the situation - I have a cleaning lady that comes once a week (she’s been with us for years and is older). She hates the cams, feeling like she’s being watched. So she asked if she can unplug them.

Id rather build an ifttt that just rotates them 180degrees and points to the wall on Mondays 7am-5pm. That way she doesn’t feel watched and doesn’t mess with them and forgets to plug them back in. And in an emergency (I use it for my dog) I can just manually rotate them back to face my house.

IFTTT Wyze App doesn’t have a PAN action as a “that”. Any thoughts? Any other creative ideas to solve this “social” problem? Thanks!

Hello @andre2 and welcome to the community.

I unfortunately do not know of a way to schedule that to happen. There would have to be a way to set it to look a certain area at a certain time and neither the app nor IFTTT has that option.

There is a #wishlist area of the forums and you could see if anything there is close to what you would need and vote for it.

My quick search shows a topic for more IFTTT integration with moving the cam to a specified point as being one of those, so you could vote and add any information you would like in that topic.

With the amount of products being released growing and the requests for more IFTTT integrations increasing, we have consolidated them here. Please click VOTE at the top to indicate your desire for more IFTTT features. You can reply to this topic with thoughts on which of these are most important to you, We understand that having these requests consolidated in a single #wishlist topic means that you can’t vote on them individually. That is why commenting about your favorites, use cases, and pers…

Thanks @WyzeJasonJ! I just did that. Let’s see if we get the wishlists one day.

I use IFTTT to turn on my 4 Wyze cams when we leave our home (Using location services) and back off when we get nearby. I also use the Time/Date IFTTT function to turn on the garage and back door cam at 10pm, off at 6am, even when we are home. Based on what you’ve described above you could do that to your cams when your housekeeper comes in. She’d have to know that this happens dependably though.