Wyze Dropped All Firmware Before 8/2020!

They are no longer distributing ANY firmware for the V2 before July of 2020!

There are now only TWO versions available (not counting RTSP and webcam). What the heck.

Note: This version was added to give customers an option for flashing back firmware to a previous version. Older firmware versions are being removed from this page because they are incompatible with newer Wyze Cams and would break a newer camera if applied.

Screenshot. All older links are gone. 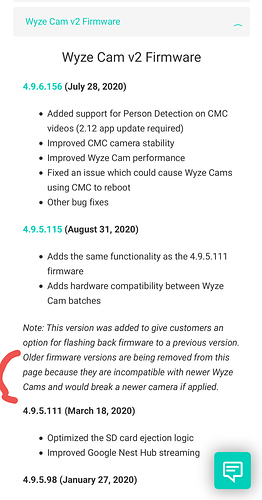 Older firmware versions are being removed from this page because they are incompatible with newer Wyze Cams and would break a newer camera if applied.

Is there a new camera we aren’t aware of or is WYZE lying, again?

They also refer to new “batches” being different. It seems pretty flimsy to me. You would think if firmware were bricking new product we might have heard about it in the forum by now. I checked an APK site but most of them don’t carry firmware. This is terrible. 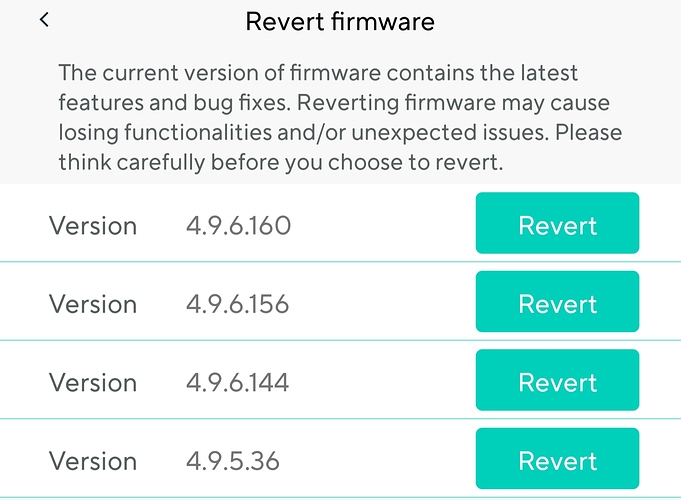 FYI it seems that a little URL finagling works for the time being. Download 'em while you have the chance, guys.

Edit: Nope. They blocked some of them.

4.9.5.36 is blocked from direct downloading but I can still revert a camera through the app.

The old Pan firmware links still seem to be there, which lends credence to the “new batch” story. Stlll not a good response though.

I still have copies of the last version of firmware that had the Xnor Person Detection.
A few other versions too. I keep a lot of stuff.

Actually that one I eventually munged correctly. Which is a good thing because I don’t see the copy I thought I already had.

Funny, I figured this thread would have received a lot more attention. Ah well.

There was certainly a firmware issue that -was- bricking some, but not all, V2 cameras - I know this because I had one of them in my setup. The bug existed in 4.9.5.111 and several patch levels prior to that one (4.9.5.36 was ok), and was fixed in the 156 release (presumably in the group of “other bug fixes”), which I discovered myself after Wyze had sent a replacement for the bricked cam. Since there were security fixes in the patch levels between 36 and 111, it’s not unreasonable for Wyze to want to minimize its exposure both for the security issues and the bricking problem by removing the problem releases.