I recently got a Wyze Doorbell and replaced the Ring v2 doorbell (wired) that we had. I thought it would be a straight replacement but for some reason it hasn’t been. the existing doorbell had 2 white wires that powered the old doorbell and the Ring doorbell as well. But the Wyze won’t come on. I’ve tried switching the cables and I even went out and bought a different transformer and nothing works. I even fused the 2 wires at the Chime box like the instructions stated… I’m at a loss. I’m not sure what else to try. Any ideas?

Also the 2 white wires are the only ones I can get to as the previos owners of the house or whoever cut the other ones and I can’t pull the other wires out from the brick.

Welcome to the User Community @apostlemk.

Not sure if you have a bad doorbell (bricked) or if it is bad power.

The VDB v1 requires between 16 and 24 volts AC power (not DC) AND above 10 VoltAmps to operate. If you have a multimeter, you can test this on the existing wiring.

If you are posting about the version 1 wired power only doorbell, to test if the doorbell is bad, there is a micro USB connection under a rubber plug on the back that can power it. Do not mount the doorbell using this power as it will void the warranty. But, if it powers up using the mUSB, then it is something in your line power.

I tested the Doorbell by the Microusb port on the back and it did power up, no issues there. And I’m coming from a Ring Door bell Ver2, and it powered up fine and stayed charged on a 16v AV transformer. But I did go to Home Deport this weekend and switched it out with a 24V transformer and still nothing.

My only concern is “transformer”. Many use the term universally, but it is important to have the right power

Usually, a transformer converts power from the 110 Volt AC over to a DC power level. The doorbell requires AC. What you need to power the doorbell is a Power Adapter that adapts the AC voltage down without transforming it to DC.

Check what you bought from Home Depot to be sure power output is AC. If it is AC, it would need to be at least 416 milliamps (mA, .416A) to meet the 10VA minimum. 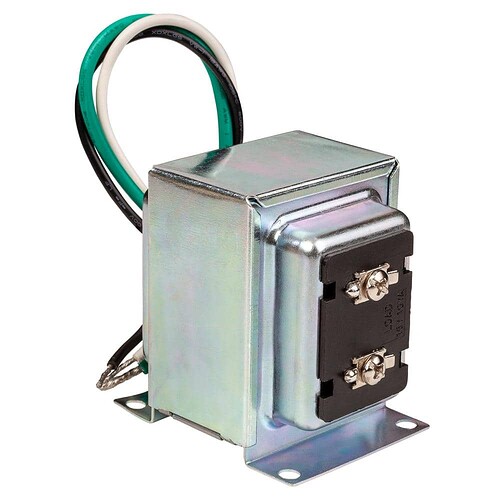 This Defiant Branded Wired 30VA Doorbell Transformer is ideal for new construction or replacement. It features a Low-Voltage wired design that is perfect for most wired doorbell installations. This 30VA

That’s the one I bought. It was the only one they had left. It’s a 16VAC/30VA Transformer

By those specs, it should power the doorbell perfectly. Not sure why it won’t if you have power to the terminal pigtails after hooking it up.

My next step would be testing the terminal pigtails @ the doorbell end with a multimeter to confirm power is being delivered. If it is, there is a possibility one of the screw lugs on the back of the doorbell is defective inside and not connecting to the power board.

I’ll see if my neighbor has a multimeter when I get home tonight. I may even try sticking the wires directly in the holes without the screws to see if it powers on. I know when I touchs the wires together from the doorbell I can see a faint spark. I haven’t tried that with the pigtails but will still still see. Thanks will keep you informed.

Not sure how this ended up but those pigtails are so flimsy and I had a hard time mounting the camera to the bracket using those. I felt like I was damaging the pigtails.