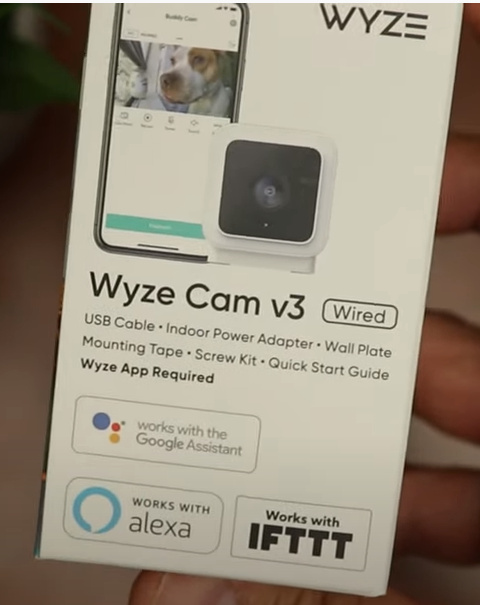 Here is the box it is shipped in. They launched it with this claim…knowing it was false.

Thanks for that. I watched this video and found where it says on the box that it works with Google. Hint: IT DOESN’T

they’ll most likely have google integration working by the time it’s shipped, so there’s no reason to keep claiming it false. It’s just currently broken.

Dude, how I wish you were right. However, the fact that it doesn’t work has been under investigation with the v2 camera for more than 18 months. Check out this thread for more info.

They have no idea how to fix it. So in essence, they knew that none of their cameras integrate with Google and they launched this new camera knowing that it still doesn’t work, but did not want to lose Google customers. Pretty sad if you ask me…

I’ll have to test when I get home, I rarely stream my cams to my google hub, I find it hard to believe it’s not working. 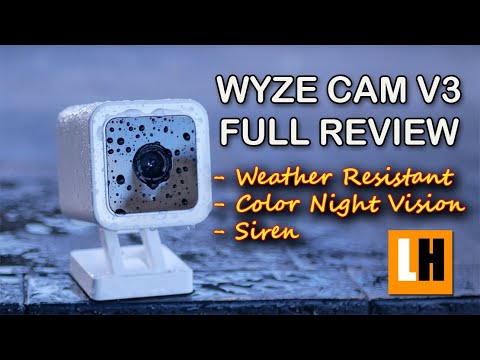 I dont have a v3 yet to see for my self, but Wyze is admitting it still does not work. Dont get me wrong, I am still going to buy at least 2 of these v3 cams just for the outdoor capability. But dont make a claim that is wrong. Dont try to sell me camera with a prominently displayed sticker on your box if you know it doesnt work.

For comparison, I have other cameras that stream to all of my google devices(Nest Hubs, Lenovo Smart Displays, and Chromecasts) almost instantly with no buffering.

I watched it…trust me. I have 5 v2 cams. Wyze admits that it doesn’t work. They even pulled the Google claim from their v3 web page today…it was on there earlier.

if u watched the video, then u should know he successfully streamed the v3 on his hub…so your false claim is bogus…it may have bugs but they’re probably working on it.

there’s no false claim…only yours

“prominently displayed sticker on your box” please stop referring to a beta testing box like it’s gospel. Like the product itself, a beta testing box is NOT the final product. The listing on the website. You have a point and notice, it was, in fact removed, but this continued “it doesn’t work” whining is getting quite old. We get the point. You don’t have one, can’t test it and you are so mad that you know for a fact it doesn’t work. You don’t need to say it 20 more times. Your point has reached the masses.

The posts are not for you dear. They are so that Wyze will quit breaking the law.

This is a live version of their v2 webpage. It does not work on any of their cameras. Yet, there it is. So I guess a little whining is in store for a company that is knowingly misrepresenting the capabilities of their products. Not so beta is it?

woa! Slow you little horses there kemosabe. Before you go throwing out accusations like that in public. You must realize that unless you can prove that they have broken a law, you in fact have just broken a law (libel laws). So I ask you what specific law has Wyze broken here. Give me statute location & number. I don’t think you can so, please be careful. You are just a little too hyped up about something that you can definitely get somewhere else. If Wyze doesn’t have what you want, then just leave.

The Federal Trade Commission Act allows the FTC to act in the interest of all consumers to prevent deceptive and unfair acts or practices. In interpreting Section 5 of the Act, the Commission has determined that a representation, omission or practice is deceptive if it is likely to:

Then report them. Posting to a forum DOES NOTHING. If you believe they have violated your consumer rights, then do something. You know what will happen. NOTHING,. Your personal damage means little to the FTC and they won’t do anything more than request that Wyze cease posting the claim or prove that they have the capacity. Unless you want to pull together a class action suit of those who have both Google Home devices and Wyze (you would have to have both prior to visible public knowledge of the shortcoming), [Mod Edit]

It does nothing? It literally got them to remove the Google sticker from their webpage TODAY.

I actually like the cameras. I like the price. I like the app. I just also want to like the morals of the company. In another thread concerning this same issue on v2 cams, we have been conversing directly with Wyze employees. Raising issues like this is EXACTLY how all companies get better. And honestly, it is the exact medium all companies want their customers relaying issues to them.

First off, not “morals”, you are referring to ethics. I don’t care if the people at Wyze are immoral. I am, why can’t they be. I do care if they are ethical.

Next, I said that reporting them to the FTC would likely do nothing, and by that I meant nothing for you.

Lastly, the proper channels to deal with “legal” matters is NEVER in the public first. If Wyze refuses to respond to valid legal arguments done in private, that is where you address them in public. By jumping directly to the public shaming approach, you are displaying immaturity and lack of understanding of how products are developed and go to market.

If the V2 doesn’t work with Google Home devices and it is an 100% fact (meaning it works for NO ONE), then you have an argument. If it works for some but not all, then they are perfectly within their rights to claim functionality. That is, so long as their legal documentation covers non-functionality claims by saying that their device doesn’t work on all Google Home devices. Fun loophole here, they don’t have to specify which ones.

Not saying they would, but if Wyze knew that they had broken no laws, they could now sue you for libel. If they don’t know if they have or if they already have FTC complaints, they would never consider such a suit. You haven’t been sued yet… Which is it? Is it a ticking time bomb? Could you be sued any day now? Have you read every single legal disclaimer in for the device? DO you know if someone has gotten the device to work with Google Home? I would hire a lawyer.

He saw it on a beta box photo and on a V2 listing on Amazon. Claim or not, if just one person got it to work without violating the warranty, this claim wouldn’t stand up in court (or the FTC).

Even if they allowed developmental claims to slide into advertisements and listings for official releases, the most that the FTC or any selling platform is going to do is make them remove the graphic. I will mention here that if you go to the actual Wyze store on Amazon, they make no such claims

But since you mentioned it…

morals refer mainly to guiding principles, and ethics refer to specific rules and actions, or behaviors. You are referring to a specif action. Also morality is a trait of an individual. A company can be neither immoral or moral (only the actions of the individual can be characterized as such).

On the nothing. I clarified myself. Got it.

Wyze Wizards. Doesn’t sound like a legal team to me… Wait. Nope, not a legal team. So no, you public airing of legal grievances is still not the right forum. No, wait. You still have not proven legal infringement, so still don’t think any airing is appropriate.

You have had a problem for 2.4 years and you think a forum is still the right venue for your issue? Okay?
As previously stated, if just a small percentage are able to use the device with Google Assistant, then the claim is NOT false.