I recently purchased a pack of 2 of the Wyze Cam V2. I am very impressed with all the features, design and overall performance of these cameras. However, I am not hearing sound from the app when viewing the cameras. Is this normal because of the price? I can’t complain if it is because I can only expect so much from a $25 camera but did want to confirm other have issues with hearing sound from the Wyze app when checking on live footage.

You certainly should heard sound when viewing on the app.

You should be able to hear sound. Turn your volume all the way up. Is your audio muted? If not, cycle it to mute and back and see if that does anything.

Thanks for quick responses. I have attempted both of those steps and the issue still persist. I have the volume at max on my Google Pixel smart phone and i have to hold the speaker very close to my ear and all i hear is like a static or as if someone is holding a can of air and just spraying it into the mic.

Hello @DapprDad. Take a look at this screenshot and see if your speaker icon is unmuted. Tap on the screen to make the bar drop down if it isn’t visible. 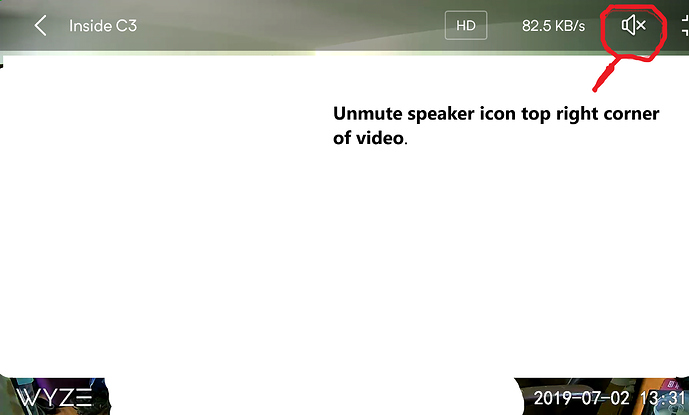 I’ve done this and still not hearing anything. I had my wife check her iPhone and she hears without an issue. I am going to try and re-install the app and see if that resolves the issue.

I have reinstalled the app and it is still not working. I am at a loss of what it could be, is there a specific distance these mics within the Wyze cam can’t pick up sound?

The distance shouldn’t be an issue at all. My cam pics up my neighbor’s rooster crowing over 300 feet away. These cameras are very powerful, so it is unlikely that both cameras have an issue. If the cameras are working on your wife’s phone, it must be an issue with the Google Pixel smartphone.

I had my wife check her iPhone and she hears without an issue.

Return them. I bought my first WYZE v2 Sunday from Home Depot. Got home and had same issue, drove to Home Depot and exchanged it. Get home and 2nd cam has the same issue.

Wasted more time driving to another Home Depot and bought a 3rd. Set it up and it worked fine, sound/mic were fine.

is the sound on the individual camera on?

Yes. I double checked everuthing on both cams. If you look on WYZE core community Facebook you’ll see it wasn’t just me with bad cams from HD.

yeah, I am most certainly aware of the numerous complaints. its interesting that its mainly from store bought cams as well. I just like to double check the stuff you can change right then and there with help from the community.

many people that have had this issue with HD bought cams have returned them as defective and gotten new units. sadly this might be your best course of action. I would urge you though to send logs into the devs. I don’t know if there are batch identifiers or serial numbers for the cams in those logs that might be able to help them Identify which batch of cams HD is selling but it might help Wyze narrow down the issue with the manufacturer and correct whatever has happened for future buyers.

it appears you’ve done your due diligence in attempting all avenues. I would just send logs in and return them to HD if you can. I wish there was more we could do to trouble shoot, but that’s my thunder. you’ve done more than most.

I see this thread has gained some attention in the fact that this is happening to more then just me. I will say that i ordered a 2 pack from Amazon, not Home Depot. It sounds like they had a batch that had defective mics on the camera which is unfortunate. I checked my wife’s phone last night and she is also not getting any sound. I am starting the return process with Amazon now. Thank you to everyone who provided responses to help narrow down where this problem was.

I dunno how tech savvy you are but possibly the speaker wires are not well plugged into that board (PCB).

I tried increasing/decreasing the volume. Depending how easy it is to get into the device i may open it up to see if that is the problem. I have ordered an exchange through Amazon, the new cameras will be here on Friday. I will keep everyone update to see if my issue is resolved after i have installed the new cameras.

Wyze uses a pretty nice speaker. I’d imaging they’re more upset than we are. lol. The mic looks cheap and it’s locked up inside the case, soldered to the main board which maximizes durability but means crap performance. I’m fine with that. I don’t wanna hear em, I wanna threaten em.

I can agree to that, the speaker itself is loud and i can be downstairs while the cam is upstairs and here me talking through it.

I’m having this same issue with both of my new cam’s I received from Amazon. No issues with the old V2 I’ve had for a while though.

I’m thinking there was a bad batch that went out to retail and online retailers due to numerous complaints. I would recommend just do a exchange. I will receive my new cameras on Friday and let the community know if my issue persist afterwards.

I received my new 2-pack V2 Wyze Cameras from Amazon. I installed them, updated firmware and i am still without sound on IOS and Android devices.