I have few of wyze cameras and after adding them on alexa , some of them I can use in routines and some are not, why is that? also, I saw that on the one that I can use I see the option of person detection and on those that I cannot use in routines I dont see this option, why is that?
I have attached two files, on one camera you will see that there is option of person detection and on the second file you will see that this option is missing (and this is the camera which I cannot view in Routines) 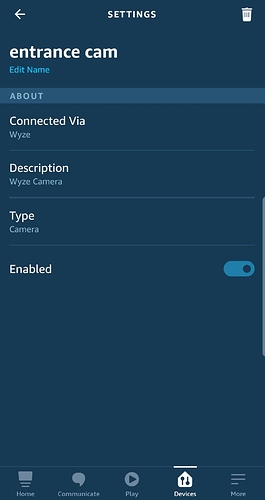 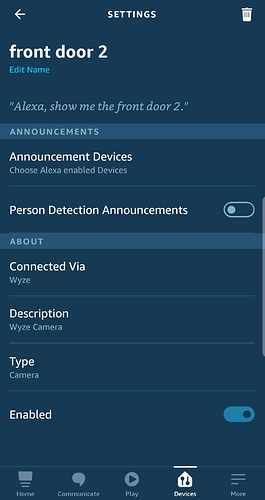 This is a recurring issue discussed in a couple of threads with possible workarounds (renaming devices, discovering) including

Greetings! I’ve had 2 Wyze v2 Cams working for about a year, linked to my Amazon Alexa Echo Show 8 - Voice commands to show “Son’s Room” and “Daughter’s Room” working fine, until about a month ago. When I give the command “Alexa, show me daughter’s room” it immediately says camera is not responding. Like it’s not even trying to connect. It works totally fine in the Wyze app. “Son’s room” works just fine through the Echo Show 8, it’s just “Daughter’s Room” not working. I’ve done all the reset/r…

It’s not the problem I have mention.
I was talking about routines and not about showing live stream

Are you signed up for Cam Plus or Legacy Person Detection?

I recently discovered that some of my WyzeCam V2 cameras were not accessible from the Echo Show. I have 4 Wyzecams throughout my house and only 1 of them were accessible when I tell Echo Show to “Show [camera-name]…” When I tried to access the other three cameras, the Echo show would reply “Sorry, [camera-name] is not responding”. I went through all the troubleshooting tips that I can find on the internet, including: Rebooting the problem Wyzecams, Echo Shows, and my routers/extenders. D…

When I go into the camera settings within the Alexa app I can see the sub-heading for “Announcements” that gives me the ability to turn on Person Detection Announcements. However, the other three cameras did not have this sub-heading

And who should fix this? Amazon? Cause I don’t see how wyze can

No. Read the posts by @WyzeFrederik in the first link I gave you. He is working with Amazon on the problem.

Great to hear. Any ETA?

Your issue is exactly mine! This morning I suddenly realized Alexa was no longer announcing Person Detection on my chosen alexa devices. I have only one camera that now has the choice of announcements - strangely being the Outdoor Cam. The other (3) cameras no longer list person detection announcements. (I did delete and add a camera back to alexa with no results) I wondered if it was the most recent camera firmware updates or software or something to do with legacy person detection. Following this for any fixes. Really liked that feature! Someone else mentioned this a few days on the facebook group and at the time I thought it was their issue…Nope…mine too.

Edit: I just stumbled across a solution on a Reddit post from 17 days ago. https://www.reddit.com/r/wyzecam/comments/j4l3ev/wyze_cams_not_being_recognized_as_person/g7m61ct?utm_source=share&utm_medium=web2x&context=3 It was suggested to rename your wyze camera within the wyze app. Then go back to Alexa app - and search for that renamed device - I was then able to see the person detection announcement again. Tried for 2 of my cameras and working for now!! (Not sure for how long)