I set up 3 smart bulbs and it worked good. All of a sudden my outside light would not follow its schedule and when I checked it would say offline. It worked for weeks and now will go offline randomly. Just this bulb. Spoke with support they thought bad bulb and sent new one. Still did it. I have to remove device and readd to get it to work again till it breaks again later. I am only about 15 feet from router and others way further away and they work fine. I have rebooted router and as said tried different bulb. Then I think it hit me… I have Amazon blink camera system and a camera very close to that bulb. I am testing it tonight but I think maybe whenever I get in the camera to make a change on settings it’s interfering with the bulb? But it never goes offline until it helits that schedule. Could this be right the bulb and camera are conflicting? And if so anyway to fix this without moving camera?

It’s possible you have too many devices on your WiFi. Some have an awfully low actual limit. But I am not sure without knowing more about your setup. I have one Blink camera myself but I don’t run any schedules on my Wyze bulbs normally. (I have lots of Hue bulbs but only two Wyze bulbs.)

Not a bad idea. But If that was the case though wouldn’t it boot random devices? Not the same device over and over? I have no issues with any other device in the house just this one bulb over and over.

Along those lines, maybe it’s boot whatever has the worst connection, least amount of traffic, been booted before, etc. Just guessing, depends on the routers handling of connections I guess.

It’s hard to say. But you could experiment some. Try moving the camera to check for interference. If that does not resolve it one at a time turn other devices off to see if that helps?

I remember not long after the Chromecast came out, Google issued a release that was bringing down home networks by relentlessly polling the network over and over. I’m not saying that this is the problem, but perhaps the network has a likewise errant device.

I am going to test tonight. I have reconnected the bulb and it works normal tomorrow I will connect to the camera and then see if it breaks the inwill know for sure when ever I connect to camera it messes up bulb…

Thank you for all the suggestions so far.

That seems to be it. 2 days ago I did not touch the camera and the bukb worked fine and no issues with schedule and stayed online. Last night I disarmed the motion on camera then immediately reared basically to just remotely connect. And this morning the bulb was still on and checked the app and it was offline. So it seems when I connect to camera it messes up the bulb. Anyone have any issues with something like this or know what to do to fix it?

Keep in mind that this forum is primarily a user to user community. If you don’t get a helpful reply here, please file a Support Request. You can also submit a request from within the Wyze app by going to Account > Help & Feedback > Submit a Log. This method will allow you to send an app log for diagnosis as well as report your issue. (Note that if you are using a beta version of the app, the log will be sent to the dev team rather than Wyze Support and will not generate a support request.)

I have twice… Haven’t been much help. One just sent me new bulb to try and other said love the bulb closer to the router and yet it’s the closest bulb to my router out of 4 and only one having issues…

I did submit my log hoping that leads to something. Thank you for suggestion… Will they reply via email? It submitted then went back to beginning doesn’t show like a ticket or anything

I haven’t seen this mentioned yet, try swapping the bulb that is giving you issues with one of the ones that is working. If the problem follows the bulb, the issue is the bulb but if the working bulb starts to foul up in the same location it is tine to start looking at the location itself.

I swapped it with a new bulb they sent me and it continued. So it must be location just don’t get why… It’s closest to router. No big walls or cement floor. Just doesn’t make sense. I thought maybe it was camera interference but I have camera next to another one that hasn’t gone offline once. So confused.

Should I still swap with a known working one to make sure I somehow didn’t get to bad bulbs?

What I mean is if you have a bulb actually working in another area, swap those 2. Put the possible bad one in another location and see if it starts working and move the working one to where the bad one was since we know that bulb works and see if it stops working.

What kind of fixture is the problem location? Bad fixture maybe causing problems with the led bulb?

I was wondering that myself. I had a gooseneck lamp 15 foot from my router and the bulb used to loose connection a lot. I changed lamps to one with a shallower shade and never had another issue.

Never even thought of the fixture itself. Thank you. I will try that and see. Not sure on what it’s called but standard outside light, thank you everyone for all the help so far. 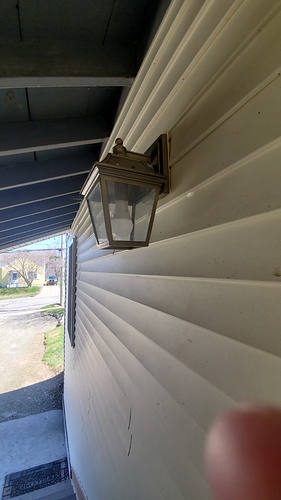 I have three outside Wyze bulbs, all in the same fixtures. The farest one on my garage from my unify access point would go offline when it was super cold outside (Minnesota here). I concluded that the cold, not outdoor rated bulb, metal enclosed (kinda) fixture all contributed to the dropping if connection. To fix I would just unscrew the bulb for a moment, then screw it back in. It would then reconnect.

The style of fixture may come into play because it’s metal i assume? It’s not totally enclosed but there is metal of the fixture surrounding the bulb. Not as much as mine but it might be a factor for you. How it’s wired may also be a factor, faulty wiring, short, etc.

Try the “bad” bulb in a known good fixture, and a known good bulb in the bad fixture and see what happens like Jason mentioned.