So I started seeing notifications “Band connection is running” . I don’t even have Wyze Band. I can’t find the place where to disable that notification. Any ideas?

This should have been addressed by the v2.10.74 update.

Hello, forum friends! We’re releasing Android version 2.10.74 today to address the persistent Wyze app notification. Sorry about that! Now only phones connected to a Wyze Band will display the notification so they can maintain the connection for Alexa, Shortcuts, and Notifications. Read our Release Notes here:

Another option is here… But you should respond if that updated app didn’t fix it.

I haven’t seen this covered yet so I apologize if this already was. I do not own a Wyze Band, but in the last few days a notification bar on upper left corner of my phone reads “Band connection is running” and doesn’t go away. Not clickable either. Tips anyone?

I have started seeing it since 2.10.74. Turning off “Downchannelservice” helped so far.

Hi @greenham09! What app version are you using?

This usually gets rid of it until the device is restarted. 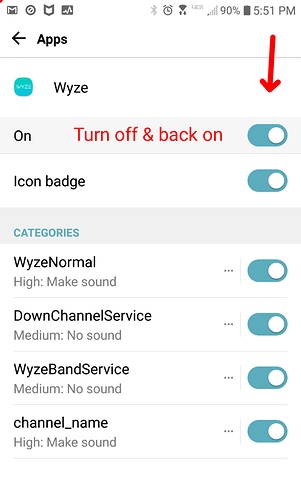 Also I think if you force close the app, then the notification will come back.

I forced closed mine and it didn’t come back.

Interesting… My banner notification comes back every time I force close the app and then reopen the app. I don’t usually have to force close it so it’s not a problem I deal with.

My app was updated to the latest version and the notification changed since then. Now it’s completely related to the Wyze Band, which I dont have. I force quit the app and now it’s gone but I know it’ll come back.

What do you think?

I’ve been having the same issue ever since the update. I turned Wyze Normal and Wyze Downchannel on and off and the notification has disappeared for now. Will watch to see if it comes back.

The only problem with doing that is you won’t receive your regular Wyze notifications.

I did turn the downchannel notification back on, so I’m hoping I should receive notifications. I just initially turned it on and off to make the constant notification about Wyze Band is running go away. I don’t even have a Wyze Band product, so wasn’t sure why that was running in the background anyway.

There is no longer a down channel notification for the latest app v 2.10.80. Did you try updating to this version to fix this issue?

Happy Wednesday, forum folks! We’re releasing Android app 2.10.80 today. We found that the persistent notification was still present for some Wyze customers without Wyze Bands and fixed that bug. The notification keeps Alexa, Shortcuts, and notifications alive for Wyze Band.

Has the 2.10.80 update been pushed out for all users because I can’t seem to get it?

I thought it was pushed out to everyone. I did notice there was one update where everyone else could see it but I couldn’t see it once. I wasn’t sure why though.

2.10.74 is the latest version showing for me in the Google Play store. Hmm.

I didn’t start having this issue until I updated the app. Now the band notification won’t go away, I don’t have a band and I am on the beta app. Prior to this I was having a persistent notification about the wyze scale which is now resolved