Contacted Wyze when my shipment didnt arrive on time. They asked me to wait another 24-48 hours. I understand the delays with the USPS, so I gave them over a week instead of just 48 hours. Now they are ignoring me instead of making things right. Strangely, despite my issue not being resolved, they kept sending me emails asking how their support team member did, despite my problem not being solved. I was cool with beig patient and waiting, but when they started to ignore me I started researching my legal options. I was shocked to find out that Wyze is being saued by everyone…and they are all new lawsuits from within the last 6 months. Just Google “can I sue Wyze.” No wonder why I’m being ignored—they need my money to fight their numerous legal battles. I’m not getting my order no matter how patient I am. They also ignore people who tag them and post on their Facebook page, so at this point I figure that I have to contact Legal Aid of Southeastern PA, file a complaint with the BBB, and contact the FTC. I dont know what else to do but to accept that Wyze stole from me, and do my best to prevent them from stealing from me or anyone else moving forward.

What dose the tracking currently say? is the package stuck somewhere or is it listed as something else? Wyze will likely have to investigate it before sending a new package and that takes time, and probably more so due to the crap that’s been going on with USPS as of late. All that said did you try the Live chat to try and talk to a person?

I am so glad you asked! The tracking info hasnt changed since before I contacted support. Now they are ignoring me to buy more time so they dont have to send another item out.

Actually, here is a better pic of the tracking, showing the history to support everything Ive said about them ignoring me to buy more time. 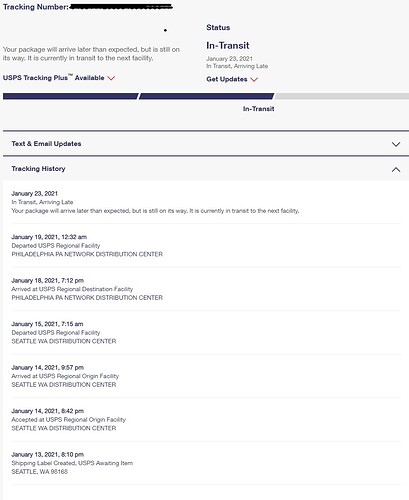 I think USPS wont call it lost for a few more days based on policy, calling USPS should be the first thing if it has not moved, or Fedex if is was SmartPost.

good luck with your lawsuit lol

What does the shipping company say about the shipment? Can they track it down for you?

The unfortunate part is that it does look like the item is still “in transit”. If the item is not USPS “priority mail”, then its gets moved to the side on the order of priorities…

There is a possibility that it could’ve moved onwards to the next sorting station because someone accidentally may have missed performing the update scan… However, you won’t know that until someone from the post office actually performs a scan of the tracking barcode… which may not be until a few more days have passed…

The USPS website has the following caution banner notification:
(Not that this helps it get to you any faster… )

Any lawsuit wouldnt be to recoup my $25 purchase, it would be to share my poor experience with others so that they can make a more informed decision. Plus, nowhere in my post have I held Wyze accountable for the late shipment, I held them accountable for ignoring men after I waited well beyond the 24-48 hours they asked me to wait. Sometimes lawsuits arent file in an effort to be won. Sometimes they are filed so that the public have public access to that information.

maybe they ignored you because they saw the same thing you saw, USPS is the issue, not Wyze

The company asked me to wait another 24-48 hours. That was 6 days ago, so Ive given them triple the amount of time they asked for. Now they are ignoring me. All I wanted was an update or some form of communication. Wyze is just flat out ignoring me.

Well thats my problem. Its still in transit, yet there hasnt been a scan since before I contacted Wyze support. Wyze asked me to wait 24-48 hours, which is more than reasonable. I had no problem waiting, and as a matter of fact I’ve waited 6 days instead of just the 2 they asked me to wait. I contacted them once about this, and a second time yesterday morning. Now they are just ignoring me rather than communicate with me. I’m pretty sure anyone in my position would feel similar. I also contacted USPS twice, and their response was to copy and paste the very same response, word for word. I dont hold Wyze accountable for the late shipment. I hold them accountable for ignoring me instead of just communicating with customers. Am I really asking for too much?

There is no excuse for ignoring a customers support ticket. Am I really asking for too much by asking for them to communicate with me instead of ignore me?

Did they hang up on you in the live chat or call? Did you give the first ticket to the person you spoke with yesterday? I doubt they are ignoring you. Try again today and see what they say, if you did not keep the ticket from the previous chat then mention politely that you contacted last week and the package has not moved and that you think USPS may have lost it, and see if they will send a replacement. You should also call USPS and get a ticket from them.

what are they going to tell you that you don’t already know??? They handed it off to the shipping carrier & USPS is holding it up. Maybe call USPS & complain or threaten a lawsuit. I’m sure Wyze customer service is bogged down enough as it is, without having to repeatedly addressing your issue where they can’t resolve. I can see your point if they never addressed your issue, but they have responded.

No not asking too much. Just some information…

I understand your frustration,… I think Wyze should’ve explained further that once the product has left their warehouse dock that it is up to the shipping carrier to deliver. In this case, the USPS service is the one to have to come up with the answer. It’s not that Wyze doesn’t want to communicate further with you, its that they do not have the answer from the Post Office as to where your item is currently stuck…

And of course, I understand that no one wants to hear news that that the item you’ve purchased and are waiting for is still “in transit”…

You want to give them the benefit of the doubt because its not your money . Ive already given them that. They asked for 24-48 more hours, and I gave them 144 hours. Id say that is reasonable on my part. Wyze also didnt give me any other options but to use USPS. There is no way I wouldve picked USPS around the holidays. I feel as though I have given them plenty of benefit of the doubt. Now, I also expected this sort of response from people who spend their days navigating the Wyze forums. Of course your first instinct is to defend the company that you’ve trusted. That doesnt make their ignorance right.

Wyze has an established relationship with the USPS. You should already know this if you spend your days reading and answering people on the Wyze forums. You didnt realize Wyze was spawned from Amazon? Yes, Amazon employees started Wyze, and Amazon even listed Wyze products under “Our Brands” and one point. They moved their allegiance to Ring since then. Its VERY common for companies to establish relationships with carriers when they ship out millions of dollars worth of products. They should be able to email or call their contact person at the USPS. Thats how companies offer free shipping. Theyve established a relationship with a carrier that provides lowers shipping costs based on volume. I guess its easy to comment when its not your money thats been taken…especially when you’re already loyal to Wyze and spend your time responding to people on the Wyze forums. Trust me, I knew that each of you would rebut me with responses that are favorable to Wyze.

No, I hold Wyze accountable. They did, after all, only give me one shipping option. They also told me to wait 24-48 more hours, and I waited almost 150 hours to contact them again. I have already been patient and reasonable.