Please vote for this if you think it is a smart thing for Wyze to implement, regardless of whether you would personally use it (ie: you only use iOS or whatever).

Android 11 has updated the “Power Menu” (holding the power button) to include quick access to Smart Home Controls (or “Connected-Device Command Center”), and it’s AWESOME! Here’s the Power Menu for a few options I selected for my Google Home as an example:

While Android 11 was released in September 2020, the Public Betas have been available since June 2020, the Developer preview has actually been available since February 2020, and almost a year later, Wyze (a company offering mostly Smart Home IOT products) is still not yet compatible with the Smart Home control menu / Connected-Device Command Center that will become a standard in the industry for Android (which had an 87% share of the global market as of 2019).

Other companies like Tiny Cam (or Google Home itself) can be used to provide some 3rd party access to some Wyze devices in the power menu, but there is no native Wyze support yet and we (everyone who votes for this wishlist item) would like Wyze to look into it. Here is what my TinyCam Menu (with quick access Wyze Cams) looks like:

Right now, when I tell it to show me all the compatible apps on my phone, it says these are currently the only ones I have that have added support: 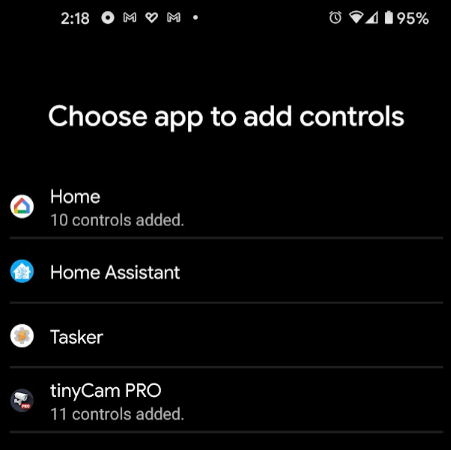 For example, with the new HMS system coming out, Wyze should make it so we can add the Home, Away, and Disarm options to the the new smart home shortcuts area here. Then we can just hold the power button, select “Away” and everything arms easily with the least number of steps to handle it.

Please vote for this if it will be helpful, or even if you just think it is worth Wyze’s attention and a good business move. It’s going to become a standard, so Wyze might as well get ahead of the competition. Thank you.

Even though I don’t use Android, I think this is an excellent idea!
Don’t forget to vote for your own #wishlist item @carverofchoice!

I feel this along with widgets should be on there to priority, they had so much time to implement this earlier.

Oh yes, Widgets would be great too! Especially for the new HMS system they say they want to make a priority. Let me post widgets for changing the security status from my home screen. That would be nice. Widgets would be even more useful right now because they could be used by EVERYONE, not just Android 11+ users. Good input!

Yes please for the love of God I just want one place where I can control all of my smart devices , wyze is the only smart devicr I have that isn’t supported natively