Will you sell your wyze car?

I got one
Preorder Car

I also got the cam v2 black edition and I have already received it.

People WERE trying to sell the cars on ebay, but ebay took the listings down because you can not sell a pre-order for more than 30 days. They violated the rules.

I will NOT sell mine 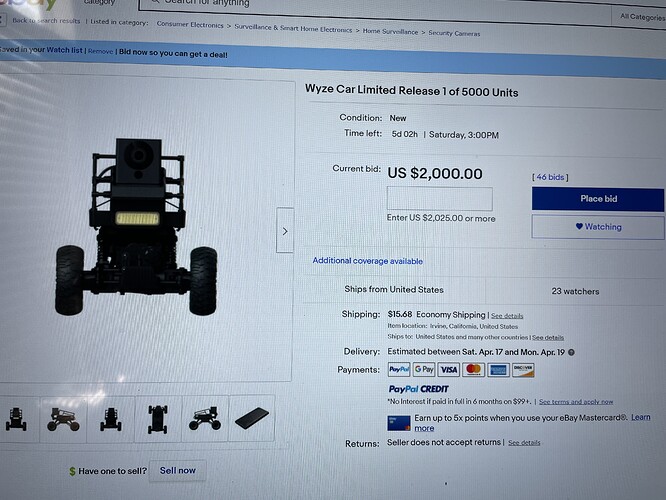 6 people were in a bid war until ebay took off the listing. It had 5 days left! I wonder how high it would of gotten?

thats crazy, had no clue the demand was so high

There is no Wyze Car. That is a April Fools Joke. I can’t believe people fell for it.

There is a wyze car but people won’t receive it until end of may or something like that. I bought one on the first round and then I was able to put another car and v2 camera in the fourth round while there was 265 left to sell. I had plenty of time to check out but I didn’t. I was seeing how long it would stay in there before it said out of stock. It was in there for a least 10 minutes. I wish I would have bought two now.

I tried a few times right on the hour and it was completely pointless. I still say it’s a April 1st scam and there’s no real car.

I tried a few time when it said there are over 300 left. I added it to my cart then was unable to access my cart and check out. Everytime I clicked on the cart, there was some sort of glitch. But to be fair, I only tried like 3 times. I was too busy with other stuff to worry about a car. 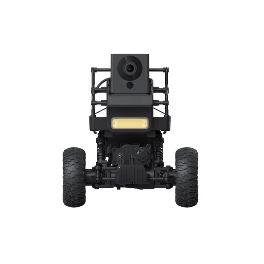 These haven’t started shipping yet.
April Fools! Wait, just kidding. Wyze Car orders are really, actually, literally set to start shipping in May. I’ll have more specific dates for your order(s) once shipping has begun.

Ah, yes. The newest addition… Wyze Car! These are set to start shipping in May. Yes, really.

Hope you’re as excited as I am to drive your Wyze Cam into areas it couldn’t reach before!

I wasted enough time simply trying to buy one off their dysfunctional website. No longer interested in anything Wyze from that point.

I’m so disappointed! I didn’t even hear about this until a few days ago!!! I absolutely would have bought one and I hope they come out with more. I’m trying to figure out why I didn’t see anything, as it’s not the first time I’ve missed a pre-order announcement…any tips for me so I don’t miss another? And put me on the waitlist for any available cars!!

Is everybody going to keep their car once they receive it?

I certainly intend to keep mine. However, I may be willing to sell the one I bought for a friend if they do not want it. (I don’t need two…)

If I had one and was offered enough money for it, I’d sell it. Most things have a price. It’s just how high of a price you’re willing to pay for or sell it at. 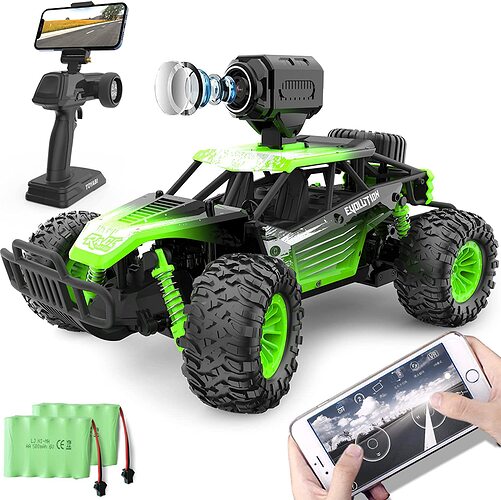 There are plenty of RC’s out there, but I hope the wyze car will top them all for the price.

Doubtful, but possible. I’m sure as soon as I get them and he sees mine is use he will accept the gift.

There are plenty of RC’s out there, but I hope the wyze car will top them all for the price.

There are probably far better cars in the same or lower price point, but this one will “probably” be the only one that controls the car and Wyze camera from the same app. On the other hand, having a nice low(er) profile tank steered, metal tracked platform with a camera mounted to it would be a better solution for my personal needs. The price wouldn’t even be that much more in the grand scheme of things. (maybe 2x if I use my existing RC gear)

But then I would have a custom tool and not a nice cheap toy. Both options have their good and bad points.

Of course I will!!! I love the idea, but I just don’t have a use for it. I got wrapped up in the frenzy on April 1, and honestly, I knew it would likely be a resale item for me. The fact that someone bid $2,000 for your car (and let’s be honest here, this is your car and you have been shilling that you are selling since you listed it) is just crazy, but at the same time exciting.

What I find a little upsetting is that for an item like this, you are still charging shipping even though you should have known the sell price was going to more than cover you.

My offer still stands to sell my car (pre-order only) for crypto-currency (top 10 only - excluding XRP, DOGE, Tether & Bitcoin Cash - that list keeps getting longer). You will have to direct message me to make an offer. I will be selling with a brand new (in box) Wyze Cam 2 Black (just purchased). Don’t be shy about the price. I am not looking for $2,000 (but will accept it). Once the cars ship, the offer is off the table.

I never put a car up for bid on ebay, I just saw it and took a picture. I did contact the seller and he had two cars he was trying to auction off. One had 6 bidders up to $2000 and another up to $300. Both auctions had 5-6 days left before ebay took them down. I started this topic to see how many people will actually sell there wyze car. I might sell mine used