“Highly reflective materials” that produce an extreme contrast condition (to the whites).

If you’ve had any experience with photography, we call that “blown out” highlights.

I understand but my Nest camera doesn’t have this issue.

but my Nest camera doesn’t have this issue

Yea, I have a few Nest IQ’s and don’t see the same phenomena - probably a difference in the quality of camera hardware and software algorithms that negate these issues. You probably also notice the audio quality of the Nest is better than the Wyze.

And to be fair, it could be the angle of the Wyze camera (compared to the Nest) - have you placed a Wyze in the exact same location (as the Nest) and pointing to the exact same central focal point, and can still see the blown-out conditions with the Wyze?

The sensor in the Nest cameras is entirely different. As you would expect in a 100+ camera compared to a 25 dollar camera. This is commonly referred to as comparing Apples to Oranges. If you are not happy with the Wyze cameras that’s entirely fine. Buy some more Nest or Arlo or Blink or Ring cameras.

I’m fine with the Wyze cameras, first time using one outside and was surprised at how bright/glary it is. I hope Wyze considers this when making an outdoor model.

I think the sensor will be a different model but not sure if it will handle highly reflective things any better.

The hardware from one camera to the next all handle HDR situations differently, some better than the next.

I have the same problem with my Wyze doorbell camera, the view is very glary, cannot even see the house across the street. What is weird, I have a cam pan facing the same direction and the view is just fine. I called Wyze, the solution is to turn on the night vision. That fixes the problem but then everything will be just black and white.

Can you post photos of the different views? That’ll help with the troubleshooting.

Does your doorbell have different lighting in view, say a mixture of dark shadows and bright sun? 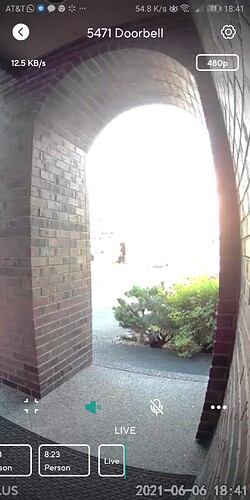 Thanks for the screeny! Yea that’s what it looks like, the camera is having trouble exposing the dark inner entry way and the super bright outside world. IF it were the other way, the yard would be in correct exposure, and the inside of the entryway would be black. If it were a gloomy overcast day, then id expect everything to be more uniformly exposed.

That picture was actually taken when outside was gloomy, yesterday. I will try to adjust the angle but not sure if it will give a better exposure result. Thank you for your opinion.