If you ask me, something fishy here… 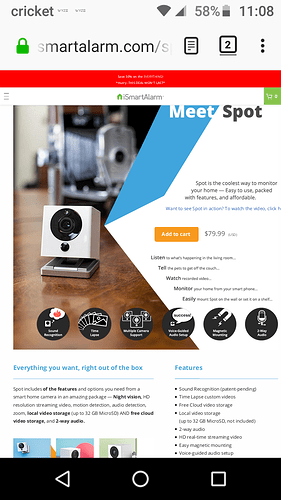 The hardware of the camera was is made by an OEM. Wyze extensively modifies the firmware and the App which is what differentiates them from others that use the same OEM hardware. Additionally if I understand it they have had the manufacturer modify the hardware somewhat as well.

In short nothing fishy, just a common practice in the industry.

Plus Wyze has a great support community!

Since it was Wyze’s first product, they used a modified version existing hardware through a manufacturing partner. Much cheaper way to go, which is why they were able to offer it at such a low price. The internal hardware is similar, but not identical. And the firmware and software certainly isn’t the same. The Cam Pan is based on existing hardware, too.

The same basic external housing can be found on cameras by Xiaomi, iSmartAlarm, Neos, and Hualai. There might be others, too, but those are the ones I know about.

Now that Wyze is a bit larger, I believe several of their upcoming products use unique hardware.

In addition to what others have said, I forget which one, but one of the other names of the camera has RTSP out of the box.

It would be interesting to see which company has which features and what problems each are having. So if I understand this, wyze didn’t even invent the products and several companies are all creating the same software for pretty much the same camera. All this time it was, what I believe wyze was claiming, a false narrative in that wyze never invented the cameras but instead took off the shelf camera, requested (so someone said) modifications and wrote their own software when more than likely the inventor already created software for the cams. So… Why are we having so many problems getting vid/sound to match, recording without WiFi, web browser viewing, etc etc etc.? (Please if you are going to blindly defend wyze like the Republicans with Trump, tell someone else. I want to hear real explanations asked on facts and knowledge.) I ask this with intent to understand not bash wyze. I agree that they are cheap, they do a lot and can’t be beat. At the same time, so many issues (I’m not educated in this field) shouldn’t be this difficult to fix. Thanks for any enlightenment anyone can give.

No false narrative involved. Wyze makes their version of the firmware for the cameras. That software is unique to Wyze no one else.

The app that you run on your phone or tablet is also written/made by Wyze and unique to them. I have one of the OEM cameras and the software and firmware are very different.

Wyze never anywhere claimed it “invented” the hardware. I think perhaps people made some bad assumptions not actually based on facts.

Yeah, I’m not sure why you’re upset about that. They’ve never denied that they licensed the hardware from their manufacturing partner. The bulbs and plug are pretty generic-looking, too. so I wouldn’t be surprised if there are other products that use the same housing for those, too. ¯\_(ツ)_/¯

As for the other similar cameras, you can feel free to do your own research on their features/problems. In my previous message, I listed all the companies I know about that use the same basic external housing. I haven’t done lots of research about them, but I assume that information would be scattered in various corners of the internet.

Thanks guys. Ya I assumed a lot of things. Never knew things worked this way in manufacturing. I always thought the post about people claiming signals were being sent to unknown places were cra cra. But if the hardware is from unknown, could these people have a serious claim? From what I understand it’s not uncommon for specific parts or hardware to have drivers or such provided by the manufacture, could they input bad stuff also without anyone knowing especially if it’s not open source? For me personally, if someone wants to look at me walking around naked, they already a sick puppy, it ain’t pretty. But not everyone probably feels the same.

The hardware is not from an unknown source. It’s from a well established company. As for possible malware in the camera from the manufacturer? Possible, but since Wyze replaced any manufacturer provided code with their own any chance of it remaining is pretty slim.

But anything is possible. The judgement one must make I suppose is, is it likely and what would someone gain?

If you are that concerned I would suggest not buying anything from anyone that is technologically based.

As for the cameras communicating with seemingly unusual servers, Wyze has addressed that elsewhere on the forum, and on Reddit. There’s a reply by @WyzeTao on this Reddit thread that explains everything.

Thanks I know enough about stuff to have a thousand questions. I’m not all that concerned, just curious about the weirdest stuff sometimes. Lately I’ve been watching a lot of YouTube videos on electronic data privacy and security especially as it relates to NSA and hacking. If a small percentage of what they say is true, nothing except going dark/off the grid and living under a rock would protect privacy and it’s still not 100%.

as it relates to NSA and hacking. If a small percentage of what they say is true, nothing except going dark/off the grid and living under a rock would protect privacy and it’s still not 100%.

I’d agree with that statement. If the NSA wants to hack your stuff, they probably can. Any hack that uses a zero-day exploit is pretty much impossible to protect against, and the government keeps a trove those that haven’t been publicized yet for strategic/defense purposes. That’s not a conspiracy theory, by the way. It’s acknowledged fact. You can Google “Vulnerabilities Equities Process” if you’d like to learn more.

There have been cases where sort of “back doors” have been found in computer tech, even in some chips, but those are far and few between and I’m not concerned about Wyze Cams.

Tech is a good place to hide features not known by the public for all sorts of reasons.

True personal semi off topic story:
Back around 2001/2002 I had read a story online from the Electronic Freedom Foundation about color copy machines being able to track things copied on them, particularly Xerox. I didn’t believe it, but I checked our Xerox color copier at work and sure enough, it was exactly as the EFF article mentioned. If you took a blue LED light of the right wavelength and held it on a shallow angle near the paper, there was a series of teenie tiny dots in a grid pattern that appeared on every single copy made on the copier. It was made with tiny yellow ink dots that were completely invisible to the eye without the blue light at the right angle, even with a big magnifying glass. The dots were a code that provided the machine ID, the date, and I think the time the copy was made also. The idea was that counterfeiting of documents, ransom notes, or anything else could be tied back to a specific copier on a specific date by the feds.

The funny thing was two different Xerox technicians that I knew had absolutely no idea this was part of their copiers because it was kept so hush hush, at least at the time.

Now that Wyze is a bit larger,

Is that in reference to their Black Cam?

A bit off subject but some of you may find this video interesting.