What is wrong w/ person detection?

miss lots of person, only detect once a while now

Person detection for my front camera rarely works as well. I figured it was too small of a detection zone (about half the camera view), but maybe not

Most of the time the AI only catches parked vehicles for me. It completely missed people walking by with their dogs.

It just doesn’t work. Well it used to a few years ago when I bought my first camera. It was a major selling point. Seemed to work flawlessly. But then Wyze announced they didn’t actually own the artificial intelligence software they were using to detect people… some licensing thing or whatnot idk, so they suddenly removed that functionality. Leaving us all like uhhhh well what are you going to do now? Then they come out with what we have now. Crap. And then heaps of more products like scales and light strips and vacuum cleaners and smart plugs and light bulbs and a convoluted app that has become so complicated it’s at times frustrating to navigate, and a customer service center that is so obviously inept the company may be reaching a point where they might be better off selling out to someone who can restructure and take some actual control. Because Wyze is not what it used to be.

Yeah, I have 4 cams all covering the same area in front of my home (facing different directions), but people walking by pass each one so it’s a great way to evaluate the quality of Person Detect.

My cams (because performance is different):

Person Detect AI used to work GREAT but something recently changed for the v3 cams. All 4 cams would report when a person walked past them. This accuracy was close to 95% (all four agreeing they detected a person).

In the past several weeks, something changed with the v3 cams. Now the accuracy is closer to 10% where the outdoor v1 cam will detect a person and the NONE v3 cams detect the motion as a person. Sometimes one of them will, but a VAST majority of the time, none of them detect the same person the outdoor cam spotted.

I’ve tried removing and re-adding the licenses, but that didn’t help.

I’ve used the report feature “Help us improve AI by sharing” but as far as I can tell, it’s just a black hole.

What’s the point in paying for a service that only works 10% of the time?

You hit the nail on the head! The AI doesn’t work as advertised and it doesn’t seem to be learning! And to think they are actually selling Cam Plus Pro, imagine the false alarm rate. Most cities charge the home owner a fee after one false alarm call. And that fee gets substantially higher with each false alarm call.

All I want is motion sensing and unlimited recordings. So why do I have to pay for the AI that doesn’t work?!

If Person Detect isn’t working, you need to reach out to their support. I don’t know WHAT they did but they fixed it. I think it was something wrong with my licenses.

I wonder how much person detection relies on a strong wifi connection. I have to say person detection on my V3 cameras is pretty good. I wouldn’t give it an A…but maybe a solid B. The issue is more false-positives than missing people entirely (YMMV)

Reaching out to their customer support fixes nothing. They are incompetent and know nothing about the products they try to support.

What Wyze needs to do have the AI only identify what is within the motion grid, that’s it. I don’t care about parked vehicles. I want to know what triggered the motion detection event.

Well, it now seems like I have joined the false detection group, with just one of my 3’s. (Let’s not talk about traffic headlighs.)

My front v3 is ok so far. It’s my driveway v3, which now is starting to give me false "Smart Alerts " regarding “person detection” after years of reliable service.

People near my car is important. Imaginary ones make me ignore real threats.
Thats now making these, not so “Smart Alerts”.

Can you post a screen shot of your events tab? Are these smart alerts listed as automation in the event tab next to the video clips? Do you have any rules for uploading a short clip to the cloud?

I believe the same headlights creating shadows, that go across parked vehicles.

These were once ignored by my v3 cam not as people, but just as “lighting changes”, across vehicles, Are now presented as Persons, when no one is there. 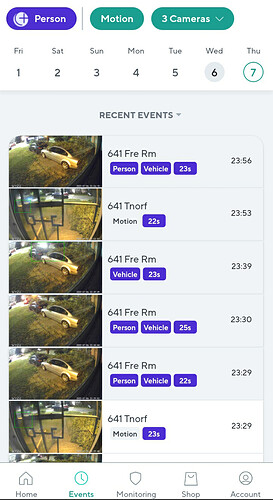 Same problem here…only thing that has worked so far for 2 days now is I unplugged my cameras and then I plugged them back in .,…so far all good.

It no longer reports light shadows as people.

Now if only, the stray headlights. The ones outside of the detection zone. That are Showing up as alerts, could be fixed.

What alert is it giving you?