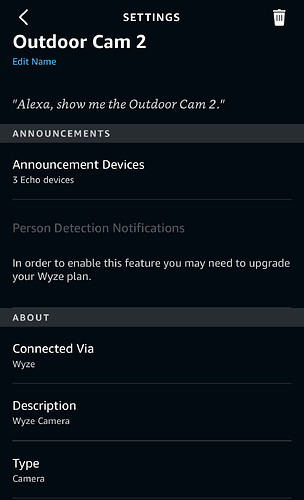 @spamoni4 i saw where you’ve made a previous comment yours is working. Any insight?

I will check to see. I did look at Alexa for my camera ans this is what I see

Notice that I have the person toggle. the Camera also has Cam Plus associated with it. My Firmware for the camera is at 4.48.4.418 and the Plugin Version is 2.39.0.2

Are you running the same versions?

Note, at one time, I found disabling the Wyze Skill and then enabling it again picked up some missing items. Something you can try.

Yes. I’ve toggled it on camera and Alexa which was how I got it working on the v3s and cam pans.

Another interesting thing to note is after the latest iOS app update the toggle in app for person detection on the WCO prompts to purchase plus. In the beta app it still allows you to toggle since it’s supposed to be included in lite.

Very interesting. I canceled the subscription. Resubscribed. Using the Beta iOS app I toggled the person detection off and on. Gave it a minute or so. Then Alexa showed the person detection toggle for the WCO.
However, my other cameras that had this option are now acting like the WCO was. It’s not available.

I toggle the person detection in the Wyze app and then refreshed Alexa app. Now it’s working.

They’re obviously a bug in the Wyze app. The production app is not allowing person detection to be turned on for the WCO when on lite. The beta app is.

And now my cameras are not viewable in Alexa.

Wyze has been updating the AI engine and at times unsubscribing the cameras and subscribing seems to clear things up. I had done this on occasion.

I have seen that at times, but mine has still streamed. I have also seen that it took some time for this to clear up as well. However, other than disabling the skill and then enabling it again, I am not sure what else to do on the Alexa side.

I can check on this, but wont get to it till later tonight.

@carverofchoice @R.Good , do you have any suggestions?

Just odd the iOS beta app allows me to turn on person detection and prod app doesn’t.
Hopefully this will be fixed in the prod app.

All are back now.

Unfortunately, the WCO v2 is one of the only products I don’t have

So I can’t really test anything with that model cam.

I almost feel like I should buy one just to catch up to R.Good with badges.