Can someone in the know please advise WHY Amazon no longer supports Wyze Cams on Alexa app?

We used to have ‘Routines’ set up in the Amazon Alexa app per the menu for several years to announce someone at our front door, or outside our yard at night.
I just noticed they are not working June 2021 and as I try to reconnect them on the Amazon Alexa app, the app states that they are no longer acceptable, and two of the cams are V3 and WCO, so new this year.
So what’s up??
thanx

Can you provide more specific information? I have some routines setup for person detection on my cameras which still seem to support the V3 camera. 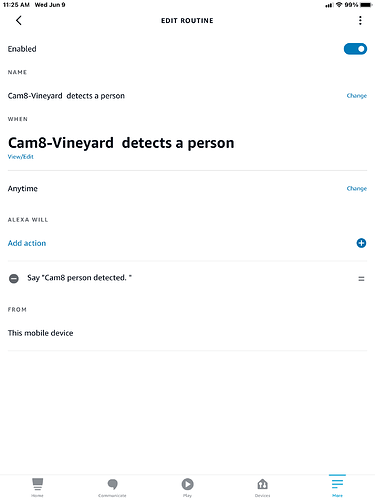 So I tried it again with my Starlite Camera and it did work THIS time. But, That is now my Only camera responding to the Alexa app. Why should I have to upgrade now after all these years? I had a V2 when they were new.

I have V2 cameras working as well. Have you tried unlinking and relinking your Wyze account to Alexa? (Seems to be a standard troubleshooting step with things like this.). This is a V2 I just setup. 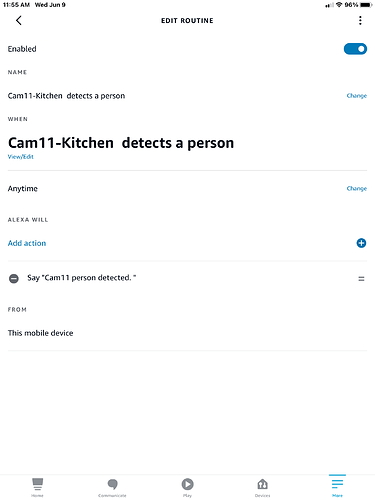 No I have not. Do I remove them from the app or uninstall the app to do that? Sorry, I don’t understand.

Oh, I believe you mean in the skills? Is that correct? Because I did relink Wyze skill, but then I didn’t do anything besides checking to see if they responded, without reformatting. Maybe that was why my V3 worked.

Yes, in skills. Try disabling and reenabling the routine. Also try creating a new routine with one of the non-working cameras. I forgot to ask, you do have motion detection enabled on the cameras?

Just tested one of the V2s and got the announcement from Alexa, as expected. 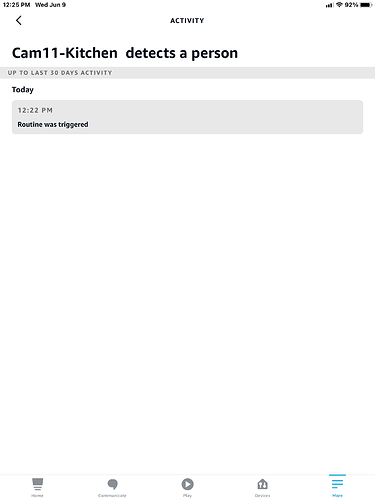 No I don’t have motion detection enabled anymore since wyze charges extra for that now days. I will try your suggestion now with the V2 cams.

Motion detection is free…CamPlus is an extra. Depending on when you purchased the V2s you may have free legacy person detection or you may have agreed to pay something for it (“Pay What You Want”).

I followed everything you suggested with V2 and WCO and now I get “You must Upgrade your account to use this feature” !

No, I Never would agree. And that’s why I wouldn’t take it. So, I guess that’d solve the problem.
I’ll work on it from that angle then.
Thank you so much.

No idea what needs an upgrade. You need to contact Wyze support to see if they can help. I have done nothing different than you and mine all work. The only thing I can think of is that you need some form of person detection on the cameras since that is the only choice for a trigger in the Alexa routine. Mine all have some form of person detection, either legacy or camplus.

Well, everytime I enable person it unselects most of my cams from the filter so that they won’t show on events and that’s not much help then not trying to be picky.

Yeah, I think they want me to upgrade to person detection or Amazon might have some new upgrade that I’ll never pay, but thanks for trying. You were more help than I’ve gotten prior.

You said in your original post this was working before. Did you make any changes to the cameras before they stopped such as an end to a CamPlus subscription or ending the legacy person detection?

No, I didn’t. Only thing i can figure is they changed policy or either a Wuze update or Alexa/Amazon update caused it (like the updates contantly knock them off system, offline).

Maybe he’s not done a firmware upgrade on the cameras and they are using one from back when motion detection was for a fee ??

In reply on the upgrade question, all of my Wyze devices are regularly updated together through the ‘All A Once’ version of the Wyze app about weekly when the wyze app notice pops up, but thanks for suggesting.

Any chance you are in Canada. V3 does not appear to be supported at all with Amazon/Alexa.ca. Does not even recognize. v2 recognizes but can not add any routines to it.