My WOC is not charging when I connect the Wasserstein cable to the back of the camera. I have no indicator charging light on my Wyze app. It only shows the % left. No lightning bolt indicator next to it. When I plug the WOC in to the Base or separate charging cable I get the indicator light saying it’s charging.
I have had the solar panel for 2 weeks now. After letting it charge in the sun for 3 days I connected it the the back of the camera and it charged it to 75% and that’s where it stayed at for a couple days. So figured the solar didn’t get enough charge from the sun. So I disconnected the cable and let it charge for another 3-5 days before connecting it back to the camera. For the last several days the battery % went from 60ish to today at 28%. So now I have it both in my hand looking for answers. It shouldn’t take more than a day for the camera to start charging from the solar. Do I have a bad solar panel? Or bad charging cable?

Can you charge anything else with that to see if it works? I am unfamiliar with that solar panel but that’s the first thing I would try.

I could. I’m trying another thing right now. I’m charging the WOC on the base at the moment. And I reinstalled the solar on the roof. I’m going to charge the WOC to 100% on the base and reconnect back to the “what should fully charged solar panel. They both will be at 100% when reconnected. If that doesn’t work then I will try the solar plug on another item. Thank you.

I have two Wasserstein solar panels for the WOC.

Might be interesting to put a USB voltage/current meter in line to see what the panel is shipping to the WOC.

Success! Both the WOC & Solar panel were charged to 100% when I connected the solar cable to the WOC and the WOC is still at 100% after 6 hours.

You shouldn’t need to charge the WOC to 100% for the solar panel to work?

While researching more on troubleshooting my problem I came across a video on the WOC and Wasserstein solar for it. He said to charge both to 100% before connecting the solar to WOC. It’s working so far. Well it’s been 12 hours during the evening. I’ll wait till the end of today and see if it drops. My next test is to turn on the microSD card to recording and see how the battery usage while on continuous record. So if all else fails charge both WOC and solar to 100% before connecting the cable.

Wasserstein recommends charging both the panel (it has a built in battery) and WOC before using them together. I, like you, was not convinced. Prove it. Just like my experience trying to add another WOC to a full base station. Everywhere says 4 is max. Had to try adding a 5th WOC myself.

As a test, I let a WOC get down to about 25%. The Wasserstein panel did not recharge the WOC. Charged both the WOC and Wasserstein solar panel to 100% and the SOC on the WOC has remained at 100% for a week.

Impressed so much I bought another solar panel.

This worked for me. Thank you for posting. I’ve been testing different settings. Somehow I managed to sever the connection and this solution worked for me. I only had to charge the panel unplugged for half a day. I was a bit worried at first then I found this post. I have two more cams and ordered panels for them. The panel/WOC combo has been working without a hitch for a whole week. YAAasSssSs!

Tom, just bought Wasserstein solar panels. Frustrated with the instructions to make sure solar panel is fully charged before connecting to WOC. How do I know when its fully charged? Just guess its been outside long enough?

Tech support says that “the app” will tell me when the solar panel has been fully charged. What app? Wasserstein app or Wyze?

I downloaded the Wasserstein app thinking I needed to pair it with the WOC (which is working great, fully charged BTW) but it didn’t pair. Does it need to?

THe tech support manual on the Wasserstein’s page is useless.

Looks like I’m not the only person struggling to make this work but you’ve got the answers.

Any tips/tricks you can provide would be helpful.

As for the battery level, the only level indicator I am aware of is for the WOC in the app. There is no circuitry to report the SOC of the solar panel.

Thanks for the straight answer. I asked Wasserstein tech support and they never explained that there was no charge indicator for the panel itself.

Equally interesting was a DIY YouTube demo where the guy explained the product and just hooked it up without putting it in the sun first.

Anyway, I hope it works. I bought 2 of them.

Thx for your reply.

Hang in there, I have 3 solar panels. One of them took me a week to get it to work. For whatever reason, the only way to get the panel and the camera to hook up is to have them charged fully then voilà, you will find joy. Key here will be patience( I left that panel that gave me trouble 2 full days under the sun).

My solar panels and cams have now been working perfect and unison for over 2 months. Sometimes the Cam battery will go down and the icon that tells you is connected to power is not there, just let the sun do its thing and it will eventually charge. I hope this helps. Your friends in struggle lol, have a great day!

Thanks for advice. I was over-thinking it. Also, I made the mistake of plugging the solar panel into my camera with a faulty charger. Once I switched it to a different camera, it worked fine. I’m experimenting with using the solar panel to also charge some pocket chargers for my other devices (phone, tablet).

Have it frankensteined on a table in the back yard. No idea what I will do with it. 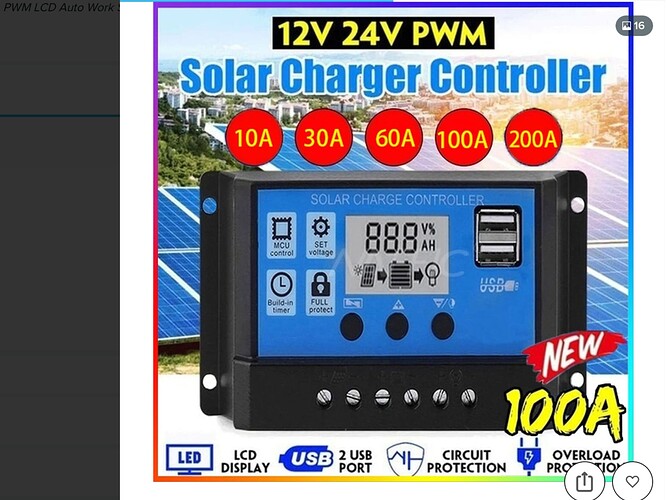 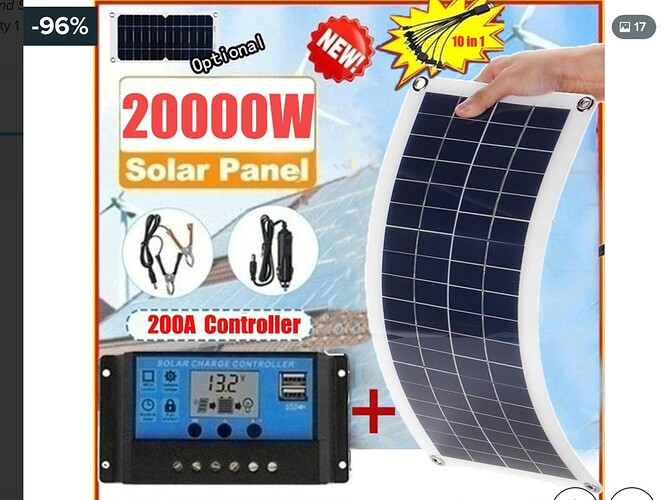 The power output of the solar panel is not 20000 watts, nor is the charge controller capable of handling 100 amps.