It seems as though the Community Guidelines may not have been followed recently on this topic. In this situation, the moderators’ instructions are to temporarily close the comments and to call in a Wyze employee. The Wyze employee may open comments again after they have a chance to review this thread. 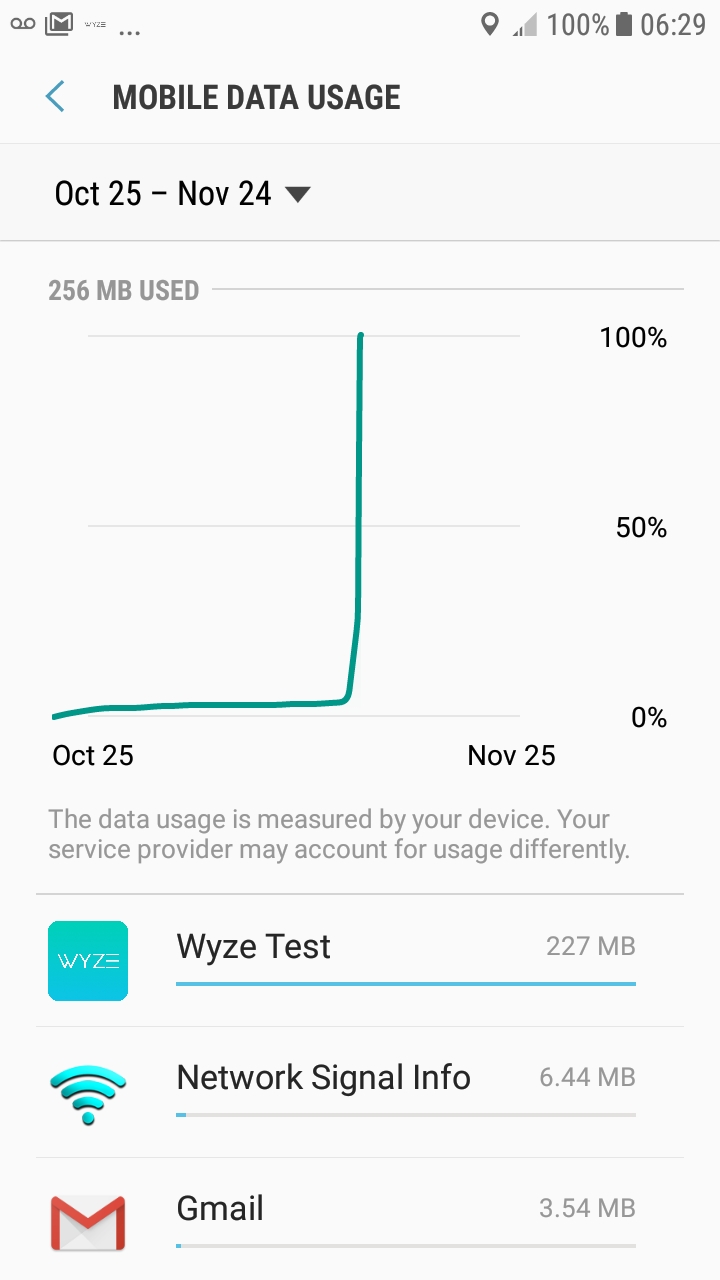 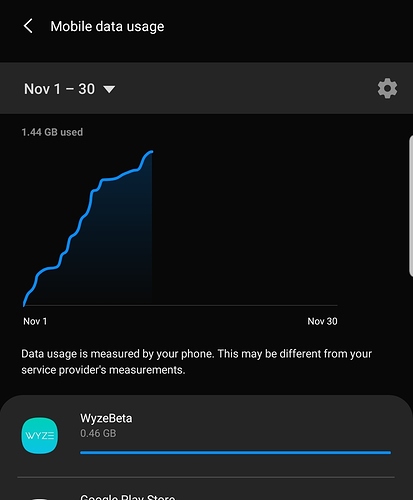 My data usage had been on the order of < 20Mb/month.

Last billing cycle was the first time Wyze showed in my data usage. Previous billing cycles it’s not there, so I can’t compare.

And if you look at my data usage that was 227Mb in a matter of hours.
Once again Beta proves to be “bleeding edge”. 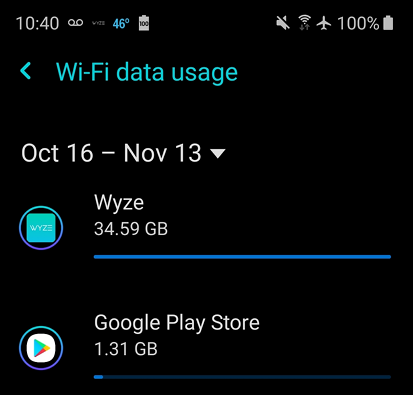 I sometimes watch live streams from a remote location.

Thank you for helping us test this version out. I’d like to jump in and help clear up some points.

First and foremost, we are sorry that we did not get a response in here more quickly. While we knew the video upload would incur greater data usage, we should have provided a better heads-up and promise to do so moving forward. This is a test version which is being used to help us improve the video lagging issue. App version 2.6.371 is not intended for wide-spread release.

If the data usage is a concern for you, please revert to a release app version or to the current beta. If you have any questions, please reach out to me. Again, thank you very much for helping us test this version and we apologize for any inconvenience it caused.

Any idea why the video upload defaulted to using my “mobile data” although the phone was connected to my home wifi?
I have a recently upgraded to 500GB data plan from Consumer Cellular (it was 250GB a few months ago and CC just upgraded it at no cost), which I never come close to using.
BUT I cannot send/receive a phone message with a picture unless I turn ON mobile data.
So I am careful with my data plan.
@NumberOne or @WyzeLi can you confirm that the JUST released version (2.6.40?) does NOT send the videos?

Once again Beta proves to be “bleeding edge”.

Any idea why the video upload defaulted to using my “mobile data” although the phone was connected to my home wifi?

My production iOS app doesn’t leak much, but it does leak data on Cellular when I am on WiFi. For this reason I have prohibited the Wyze app from using Cellular. If I need it on the road I turn it on manually, but @NumberOne I would also love someone to look into why data leaks to Cellular happen when you are on WiFi. The iOS app runs fine without access to Cellular if WiFi is on, so why a data leak?

P.S. – I have done no recent testing on this, the app has been prohibited from using Cellular for a few months now. I’m saving my data for a Christmas trip I am going to take.

I cannot send/receive a phone message with a picture unless I turn ON mobile data.

Same on iOS, so I turn of Cellular for the Wyze app alone, and not globally.

We’re actively investigating this and I’ll update you when we have more information.

@Newshound, have you sent in an app log for your iOS device? If so (or if you do), please let me know the associated ticket number the log submission generates so we can look into your case.

I just reset statistics and started a test. Let’s see what happens!

This test is for the iOS production app. Someone else may want to do the Beta app if @gemniii’s original post in any indication. Also we need Android volunteers.

Edit: I am on WiFi, and I’ve turned on Cellular for the Wyze app. It as been maybe a minute or two since I reset statistics, and I already show 9.7 MB of Cellular data used while on WiFi. So there will be something to report.

Edit 2: It’s been a little over 30 minutes, and I’m up to 58 MB used. ALL cellular data used while on WiFi has been used by the Wyze app so far. That’s roughly a gigabyte every 10 hours, so I suspect I will abort this test soon…

I tested for about an hour, then stopped the test. I think you will have all you need in the log, and it was using 100 MB of my cell data an hour. My router sits right next to me in my man cave, so it wasn’t for lack of signal strength. In contrast, my cell signal is always 1 or 2 bars.

Let us know when it gets fixed!

I am using iOS beta 2.6.58 but I have had the Wyze app entirely blocked from cellular. I will check and see what shows up.

Yeah, I had the app blocked from cellular data usage too the past few months because I knew it was leaking when I was on WiFi. I didn’t realize how bad it was leaking, tho. It is back in the blocked position again now.

Where are you pulling the cellular usage data from? The Cellular page in settings? I want to make sure I am comparing apples to apples.

I didn’t realize how bad it was leaking,

I used a poor choice of words, to describe it as leaking is like saying the Titanic was leaking after it hit the iceberg.

Where are you pulling the cellular usage data from?

The following settings were for my iOS 12:

Settings > Cellular > Reset Statistics (bottom of page)
Turn on Wyze Cellular data (same page)
Turn off WiFi Assist (same page)
Run the app
Note the time
Call up some cams (I had a group of 4 up)
Test for no more than an hour. I quit and reloaded the app a few times during that hour to show initial connections vs ongoing connections.

At the end of the test, note the data usage for the Wyze app in Settings >Cellular, then reverse the settings you changed.