Hello. I just received a data limit reached alert from Verizon, which I have never received before. The only change I can think of is I installed 7 Wyze Pan cameras this month. We tend to only check on them away from home (these are mostly cat cams) and on wireless connections as much as possible. Live view only, No motion alerts or recordings are set. I use Android while my wife uses IOS. Is it possible these cams are live streaming all the time to our phones? We are both exiting the live stream view by going back to the home screens of our phones. Are we somehow leaving the live stream open? Should we log out of the app until we need to check on them again? There really is no other reason we are suddenly using so much data. We don’t stream music, search the web etc. Just text and watch the cats from our Wyze cams. BTW, I replaced 7 Foscams with these Wyze and never had a data issue with the Foscams. Any insights? Thank you!
Jimbo

I’m not sure about your particular data use or if it’s the Wyze cameras, but while viewing the cameras you should be able to reduce data use by switching to SD instead of HD. As far as the app, I don’t think it should use data with the app closed, it should only be with the app open.

@faafaafuey,
Wyzecams constantly transmit some data over the internet to WyzeHQ, even when they’re not sending a video stream for remote Live Viewing. The transmission is part of a ‘heartbeat’ message that keeps the connection between the cam and the Wyze servers alive.

Others have measured this background data flow, and reported packets being sent at a rate of 3 pps (packets per second), with a total data flow of around 6.5 MB/sec. Other reports have indicated a heartbeat packet flow, approx every 3.5 seconds or so.

The constant flow of heartbeats from your seven cameras may explain your Verizon overage messages.

See this thread for more information.

Can you use cams without internet? Cameras

Got reply about the packets. The packet size depends on different firmware version, which makes sense to me. There are two types of heartbeat happening every few seconds for 70 bytes or less. (I am obfuscating some details here to protect their IP). This explains for 91.132.137.155 and 66.23.205.130. For 23.83.132.78, both TUTK and I think there was some streaming activities happened. I hope @gelly035-happy can give out the network capture starting/ending time + device MAC so we can check for l…

I am New user with WYZE cam. I have only ONE to try out.

It has been a week, my data meter shiws 850mb data was used. granted I had been checking and rebiewing and adjusting sensitivities etc. I use SD card.

Wait…Are you talking about your cellphone data from looking at the cameras when away, or your home internet data?

It’s gonna be interesting following this one. Because I have not had any issues at all with data and we have a very low data limit on our cell phones and we haven’t come close to going over. Because we don’t really do much data on our cell phones because we do more stuff at home and it’s on Wi-Fi. And we don’t really have a data limit here. So this is going to be an interesting one to follow along on

How much cell phone data do you get per month do you know because you can go through it real fast if you don’t have much. We only have I think like 25 Mb or whatever it is they call it. Because we don’t use data really. So we went with the smallest package they have.

We have the 4GB plan. Always have a lot left over and it carries over. Now, suddenly we have burned through all of it in less than a month. The only thing different is the Wyze cam live stream every so often.

We have the 4GB plan

Try to use WiFi as much as you can, there are lots of free ones. At work, at fast-food places, at the library, at big box stores, etc.

Also, when you’re on cell connection, make sure to terminate the Wyze app when not in use, by force closing it. As others have stated, as long as it’s running in the background, it’s consuming cell data minutes.

To force close apps on Android, press the left hardware button that looks like two rectangles, then terminate the Wyze app.

Also, as a Verizon customer, I can tell you that Verizon cheats, in that those messages, 80% data used, 90% data used – these are not accurate. They send them in the hope that you get scared enough to add data minutes before the billing period ends.

Check your actual data minutes before attempting to add more.

If you can find 2 more of your friends with Verizon service, pool your accounts together and get a “family” plan.

You just need 4 people in a group. You don’t really need to be family. Then you get an unlimited data minutes. You may find that it costs about the same per line, or even less.

All great tips. Thank You!!

Definitely use WiFi when it is available, but I have also seen a Wyze app bug that causes cellular data leakage when my phone is connected to WiFi. This bug can amount to a considerable chunk of data in a month, and seems to vary widely from person to person, I don’t know a specific cause for it. I have made Wyze aware of the issue, but I don’t know that they are working on it. I am using iOS.

Yeah those sliders are there for a reason aren’t they buddy. It’s so easy to do. I was helping an elderly woman the other day with her iPhone 7 Plus and she was basically doing everything on cellular data. I said whoa you’re at home we need to work on this.

It’s happened before in extreme beta.

After that fubar I try to make sure my data is turned off after every upgrade. It means I can’t send pictures via SMS w/o turning it on, but it doesn’t run up a bill.

That’s a great tip. I may do that as well. Thank you.

Do you know which line is using all the data? I go into my Verizon app to see how much more cell data my wife uses than me. Also you can see how much data the Wyze app uses, wifi vs cell data in the app settings and use an app like glassware that tells ya how much the app uses, foreground vs backfround. You can turn off background data also (Android for sure) It breaks it down pretty good, wifi vs cell data. All this can help narrow the culprit. 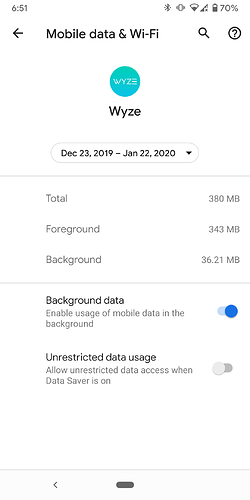 Yikes. I use my mobile data a lot – admittedly I’m careful not to stream a lot of video – that is surprising. I believe you, but have you checked to make sure it’s the Wyze app? If you dig deep enough, most phones will tell you how much data each app has used in the current billing cycle, broken down by mobile data versus WiFi data.

Very interesting. I wasn’t even aware of this. My(Android) foreground for January is 0.07 GB and background 0.02 GB. I will check my wife’s IOS usage tonight. Thank you for the tip!

My(Android) foreground for January is 0.07 GB and background 0.02 GB. I will check my wife’s IOS usage tonight.

Viewing cams from the cell phone network will definitely eat up your data, so definitely don’t leave them running – just take a look, at get out again.

As for that related cellular data bug I mentioned that can still cause your cellular data to be eaten up when you are on WiFi, I’d like to clarify that due to the nature of this bug, having no leak today does not mean you will not experience a leak later. That’s what I mean when I say this issue seems to vary widely from person to person.

The first time I heard of the issue of cellular data being used by the app when you were connected to WiFi, I checked the amount of data the app had used over cellular, and it was inconsequential. So I thought I did not have the problem. I still turned off cellular for the app as a precaution, as I rarely used the app when I was out-and-about.

Months later someone brought the issue up again, so I turned cell data for the app back on as a test. During that test, while on my normal WiFi, the Wyze app used 100 MB in a space of one hour. That is equivalent to 2.4 GB a day! Keep in mind no matter how much I used the app during that hour cell phone data should have remained at zero, as I was on WiFi.

So, cellular access for the Wyze app is turned off for me now, and I only turn it on when I need it, for as long as I need it.

I submitted a support ticket to report it, as I would encourage everyone else experiencing the problem to do. That is the way problems get fixed, when they become a support issue.

There is alot you can do to check usage levels in your plan and within both your phones OSs. I am a Verizon customer also and keep pretty good tabs on our data. Look into your Verizon app for line usage, and then what kind of usage there is, being videos, social media, navigation, erc.