So I installed my door bell this afternoon but I cannot get it to boot. It will boot, chime, reboot, rinse repeat… endlessly. I opened up a ticket but the auto response says 48 to 72 hour turn around time. So basically sometime next week.
I tried pushing the reset button but it does not matter. I have a constant 20v going to the bell so it shouldn’t be an issue of power.
Did I get a DOA?

I would disconect it asap.

the doorbell only needs 16V-10VA from the transformer, I could see too much power being an issue. did you install the fuse it came with?

Yes the fuse is in place.

ok good. well that should mean the internals are all good if that fuse hasnt popped.

when you mentioned you have constant 20V going to the doorbell. did you measure that with a multimeter? and is this direct from something else or did you run it from a transformer?

From my doorbell ringer transformer. And yes with my multi-meter. 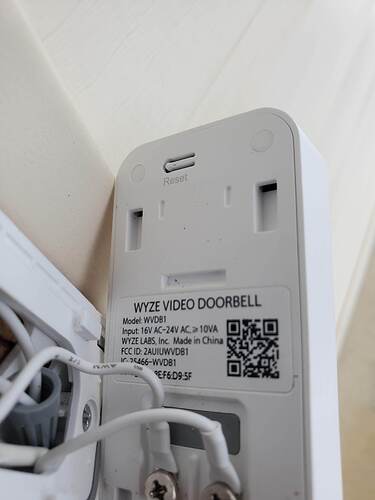 right on. I just got mine hooked up and didnt run into this.

the ticket route is usually drawn out and slow. a vastly quicker way is to call Wyze. they would be able to help you far faster and far more directly.

you might have to be on hold a bit, but in my experiences it’s never been terrible. it seems like you know enough to know what you’re doing and have tried what you need to try. I would reach out and see what they say.

sorry i can’t be of more help. I haven’t had much time with the doorbell.

Yeah I found another one of your posts with this info in it. I’ve been on hold now for 25 minutes and counting. He is thinking DOA but he’s checking with a colleague.

I’ve been on hold now for 25 minutes and counting

I use that same number and I think my record is about 14 minutes thus far.
wow. hope you get it figured out. if nothing else, at least being Wyze if it is DOA, you know you’ll get another one. ( not the greatest outcome) but better then some companies do.

DOA - They are going to send me out a new one. I just hope I don’t have to wait for the next batch to come out and that they keep some set aside for stuff like this.

if they said they are going to send you a new one, I would assume they set some aside for things like this. you SHOULD get it quick. if it was something you might have to wait for they would probably tell you. you should be good. keep and eye on your account order page and look for it to be shipped.

Is it really 16-24v AC? I thought our doorbell transformers put out DC? -Bill

A transformer is an AC component.

as @salvuccia stated they are AC. this is typical as they are far cheaper to manufacture. and being something low voltage low priority overall ( compared to say a security system) cheap is the way most companies will go

My current doorbell transformer is from the 1950’s, what are the chances its AC also? Does the new doorbell come with a transformer to replace the existing one?

Mine is old as well. But it’s still a transformer.

It shipped today, if the USPS tracking is to be believed I’ll have it Thursday.

no, the new doorbell does not come with a transformer. If you don’t have one that puts out the right power you’re going to have to get one and wire it in.

I would take a voltmeter to that and make sure it’s outputting within the limits that way you don’t blow the fuse that comes with it or cause any other possible damage. Old electrical equipment was known to be overpowered

it’s like Tim the tool man Taylor designed it all