Basic question: I am confused, does downloading new firmware update the Wyze app or just the camera?
I have noticed some of the screen pictures uploaded by forum members look much different than mine. i.e Notifications screen

Just the camera. The app is updated from Play Store or Apple Store.

I think it will vary a bit depending on which app version, phone OS version and which wyze devices you have.

Thanks, maybe I don’t know what I’m looking at. I have never seen the two right screens.

The screen on the left is my notifications screen for a V2 camera.
The next two were posted by forum members.
Are the two on the right for something other than V2 cams.
My system is Android. 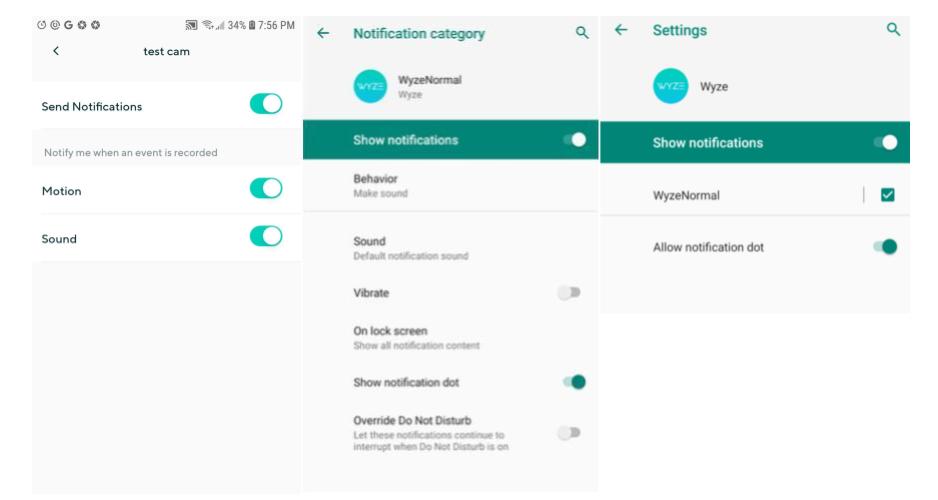 Android has a separate set of notification settings for each app that exists outside the app.

If you go to android settings, apps, scroll till you find wyze, notifications and click on the categories it opens up more settings.

Wow, I’m starting to feel like I live on another planet.
Notifications have not been an issue for me. It’s just that I didn’t recognize the screens. The below pic is from my 3 yr. old Samsung Galaxy. I suppose different phones show different notification screens. 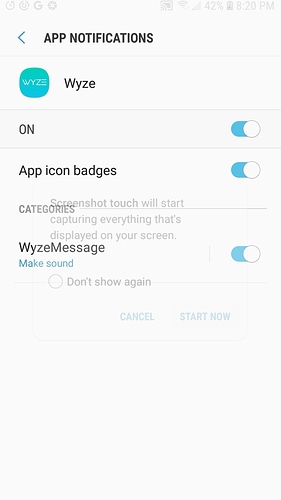 If you click “wyze message” in your screenshot it should open up a sub menu with more settings as well.

Thanks, you were right. It wasn’t obvious to me that there was still one more page. Of course, now I wonder how many more hidden pages there are.

Same with mine, I had to click WyzeNormal to get to the sub sub sub menu. Between Android version differences, Wyze app version naming, phone implementations, and the Microsoft/Google disease of HIDING clickable and scrollable things, it’s a mess.