I got three Wyze v3 cams. 2 are outdoor. I live in IL. where temps can fluctuate in the cold of winter. Unfortunately with temp swings the power adapters acquire condensation internally causing them to fail.

This is caused by the power adapter creating a small amount of heat over time with exterior temps low. The temps do not need to be zero of course but anything low in the 30’s will create this internal condensate causing the power adapter to fail.

Anyone who lives in full 4 seasons with winter needs to be aware of this issue as well as Wyze designers whom I am trying to help improve their product to fix this issue that will be an ongoing issue for their products unless redesigned.

If anyone wishes to test this condensation issue in colder climates, they can remove the power adapter and blow hard into the USB opening and in my case water shot out, more than enough to cause the malfunction fail.

I just had this happen this week. Whether this happens to the v3 cam itself time will tell. Wyze was great about offering to replace the power adapter but it will also fail eventually. I only had the three v3 cams for a couple months.

The hold times are long when calling in btw. Lastly I care about Wyze as a company and their bottom dollar wishing them great business going forward. It pains me to have them waste postage & replacement parts thus losing profit over a potential design flaw.

They need to figure out the heat / cold / condensation within the power adapter in winter climates. I wish I could hand them the answer on a silver platter but I am not an engineer. But they could look at how the competition handles the issue.

Are you using the supplied power adapter that came with the v3 outside? That is not rated for outdoors, which is why you are having issues I bet. How and where do you have the power adapter plugged in? 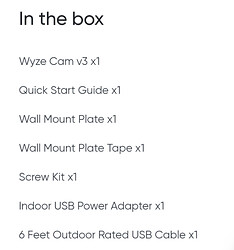 There will be an outdoor rated power supply released soon that should address the issues you mentioned.

I have a V2 cam that’s been outside for over a year in northern Utah. Never have had an issue, Today I swapped it with a V3 and am using the same adapter the V2 came with, works perfectly. Perhaps you may have a faulty adapter(s)?

I think that I would get a drill bit and make a couple of holes depending on the lowest point when the adapter is plugged in. This would allow the little water to drain out. Make the hole large enough that you can tape or glue a toothpick pointing down, so it water will run down the toothpick like it was a wick.