I have a Wyze V3 camera, about a week old. Before the big blizzard hit, it worked 24/7. Now, with the temps at night in the high 20s/low 30s and below, I cannot connect to it. Since it has home power, shouldn’t it work in temps that are in that range? Right now it is good only for daytime connections. Is there some other setting I need to check? Not sure if this is related, but the firmware update done after the camera was set up seems to have made the connections less reliable. Using any of the apps (Android and iPad) I have to try 2/3 times to get the connection to be made, even during the day. An earlier V3 I had made the connection every time on the first try. This seems to me to be a protocol timeout sort of thing.
Thanks for any advice.

I have cameras that get covered in snow and continue to work. May be a WiFi coverage issue, the V3’s don’t have the best WiFi.

I have a v3 outside and we just went through a long cold snap of -40C (-50C with the wind chill) in Calgary, Alberta. The camera never lost a beat. I have a Nest Hello that completely gave up for days and only came back when the temperature warmed up. But the v3 kept recording and functioning in the app.

The WiFi router is about 60 feet away with one wood wall in between. It shows two out of the three bars. The camera is mounted outside of a barn under a roof overhang. The router is in a shed with a wood wall. I have played with extenders, but they don’t work very well and slow down the connection. I am on a satellite connection so don’t want to slow things down any more than necessary. Typical down is 17mbs, with 1.5mbs up.
No way to get it closer without disrupting the camera view I need.
Daytime works fine unless down to 10F, then that peters out. These would be cool if they had a built-in thermometer, like a game camera.

What are your ISP speeds? I also have to contend with Viasat 17 down/1.5 up. Not much I can do about that for now. Seems that -40C is also -40F in a quirk of the scale. I am in Virginia and we luckily never see those temps. As it was, my furnace drip lines froze at 20F and I lost heat until I could get the dang condensation drip line thawed. Thanks for the comparison info.

The WiFi router is about 60 feet away with one wood wall in between. It shows two out of the three bars. The camera is mounted outside of a barn under a roof overhang. The router is in a shed with a wood wall. I have played with extenders, but they don’t work very well and slow down the connection. I am on a satellite connection so don’t want to slow things down any more than necessary. Typical down is 17mbs, with 1.5mbs up.

I don’t think it’s the cold, it’s a combination of all the above especially your network speed. Distance from router is a factor as well. I have three cameras at my cottage on 10Mbs down and 1Mbs up. One camera is literally five feet from router and never gets more than two bars. It’s under a roof overhang with perforated aluminum soffits. WiFi don’t like those. I get days when I have constant connection issues and I get days when everything is just fine. Don’t bother with extenders, they make things worst. You might have better luck with mesh extenders like the one below, but not sure as I never used one. I bet it is your internet speed that’s dragging everything down.

Reboot your modem and router and it might get better for a while. It works for me.

EDIT: BTW, I am in Canada as well and last week the temperatures dropped to -27C, no issues with the cameras.

The V3 camera on the tree below works just fine in the cold, and is nearly 180 feet from the Mesh Wireless Access Point and has 3 bars on the signal strength. On V3’s I have seen issues at 2 bars and less.

The Canadian snow is much more pure than the smog-fed stuff we get down south.

Anyone ever use a wifi hotspot configured as a home internet connection? I get a fairly good T-Mobile signal and would love to get rid of ViaSat, with its very slow upload speeds and weather interruptions.

Where I live my best choice is cellular and I use an Advantech ICR-3241 cell modem / router for my home internet.

There are many cellular routers available on the market.

Anyone ever use a wifi hotspot configured as a home internet connection?

As bryonhu said cellular router is much better solution as long as you have a good data plan.

I ditched spectrum for T-Mobile 5g home internet. 500mpbs/150mpbs where I am $40 mo. Count on it being the speed of your phone though. I think they have a special running.

I also doubt it is the temperature causing the problem. I have had three V3’s mounted outdoors here in Minnesota for well over a year. They all worked consistently throughout last two winters and so far this winter is looking promising. The coldest air temperature (not wind chill, actual temperature) recorded so far this winter was -12 degrees F on 12/23/2022.

Would love that, but it is not available in the rural area where I have my camera. T-Mobile has only one tower in my area. No one else is on that tower. My Samsung S21 5G, running Speedtest, shows between 5 and 11 down, between .12 and 2.2 up. The tower is about1.5 miles from my site, but it is a very wooded, hilly area. The camera site is on the opposite side of a hill from the tower. I think there are too few residents to make it affordable for T-Mobile to install faster equipment. I think I am stuck with ViaSat.

I too doubt it’s the cold. I have three V3s outside at my cabin in northern Minnesota. One is a floodlight. All three performed continuously even in -14F temps. Well, one exception: the floodlight cam lost connection before that eecent big storm (which took 50+ lives in the US) came through. Luckily (?) that storm caused a power iutage after which the floodlight camera was all good again. And, ironically, that cam is closest to the router, no more than 16’ away!

Other replies suggest it’s distance from the router, and ponder if metal soffits might interfere. My farthest canera is under a metal soffit 170’ from the router – which is in the back of the basement. See the included pictures of the shed near the lake, and the reverse shot from the shed faving the cabin. Never loses connection.

So I might only surmise something else in the area is causing interference for your camera. I’m providing this to illustrate, though, that cold, distance, and metal soffits aren’t strong candidates as root cause. Good luck to you. 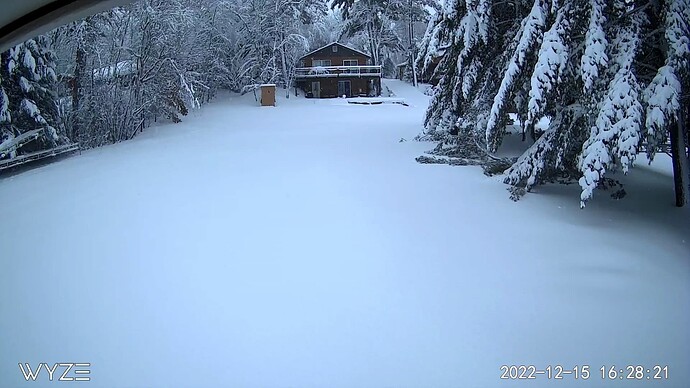 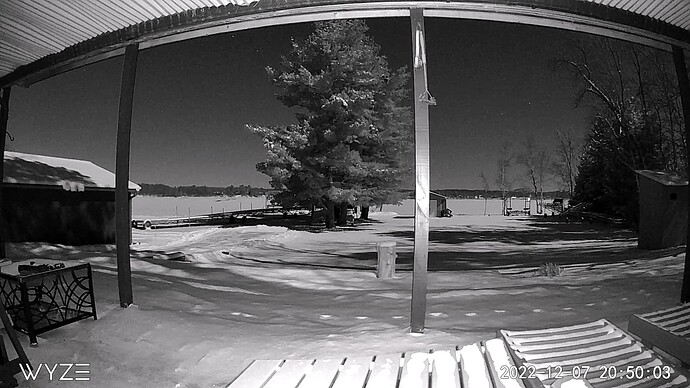 For the record, Wyze cams are little heater boxes. 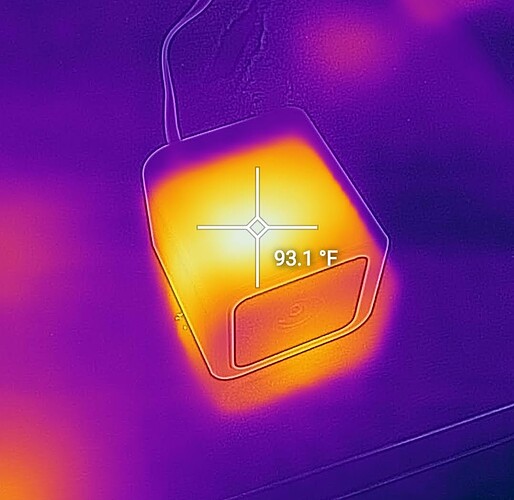