wyze cam outdoor no longer working. (not that it ever worked well. but now it isn’t working at all. ) Told to reboot router. no luck. Blinking blue light on base station and camera won’t work.

When it worked it only caught people walking away from camera, not once could I see their face.

Did you you reboot the basestation? Need a solid light b4 anything will work. Maybe try a different port on the router.

PIR détection zones and how the PIR reads a detection. 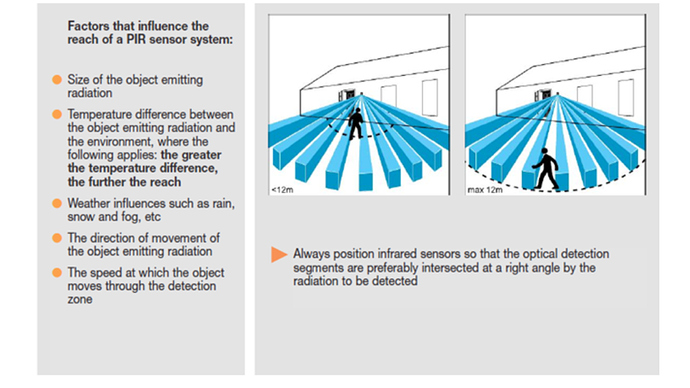 Bad cable. I never considered that could be why one day it was working and then the next day it wasn’t. Apparently the old cable that I used must have been damaged Internally. I didn’t notice when I moved it that the blue light probably started blinking. When I replaced it the light turned solid blue.
Thanks

Very interesting. But this means I’ll never get notifications or see the face of anyone approaching my house because of a narrow walkway.

Thanks for explaining this.

It doesn’t mean it will never trigger when someone is walking away or towards, it just means that it is more sensitive to sideways motion. If the camera is mounted higher up and angled downards there is more of a horizontal component to the motion in relation to the PIR when moving directly at the camera than if the camera where mounted at say eye level. I hope that makes sense.

This is not my normal location for the outdoor cam I just moved it here to illustrate walking pretty much directly at it.

Camera is about 6-6.5 ft high and when it starts recording seems reasonable to me. I’m pretty sure I could tweak it more to start recording further out of I wanted to. I only spent 2 min positioning it.

You would be able to see my face if I was looking at the camera.

This is the typical detection field of a standard PIR chip through the fresnel/non fresnel options on the market.

Notice the path that the Human (left lower corner ) would take and how far ( and few beams ) it registers per distance depicted to the right side.

Also note that at certain distances approaching head on ( Gray focused area on graph ) you may not get a detection at all. 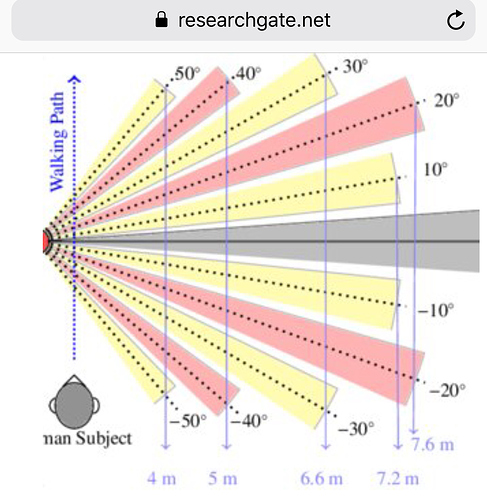 That’s a good diagram. I guess if direct movement motion capture was important to me I’d set up a wyze motion Sensor further out and perpendicular to the camera. I’d place it in like a short length of PVC pipe to make a sort of laser trip wire that is weather resistant. The sense motion sensor can trigger a WCO recording about 2-3 seconds after it gets tripped.

The only other way is an obstacle they’d have to avoid forcing them into a new zone. I’ve seen flexible air filled bollards that sticky to floors between cars and also act as door bumpers.

Forcing it to move or the subject around it may trigger that 10degree dead zone.

Heck even a line of tennis balls hanging.

Luckily my normal placement already had a physical barrier forcing perpendicular movement. I rarely miss any real motion (I have a V2 with camplus at eye level covering an overlapping area between the red lines 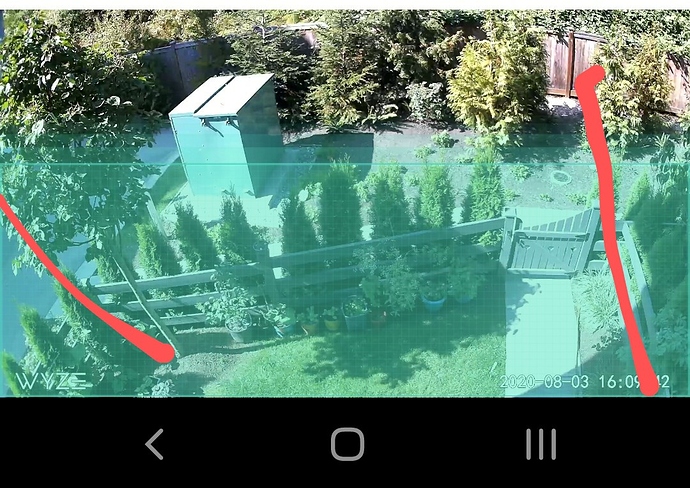 Ahhhh. I think I understand.

The issue may be the elevation of the camera. The outward arc from above average (8’-10’) mount height for these cheap cameras could be spreading the determined detection arc into thin air.

If the camera is 15’ up and using the chart for 5m distance @ 50% the person could walk under that zone and may not even be detected by the 40% zone.

The zone at 50% would have to reach to 21’ and it doesn’t. Pythagorean’s Theorum but you say you V2 covers that area from elevated…so I’m lost again.

Sorry the bottom pic is the V2. The top pic is the WCO probably 13-15ft high angled down. The red lines in the top pic just roughly show where the V2 overlaps. The V2 is mounted at ground level maybe 4 feet high.

Since the pixel detection on the V2 catches pretty much everything I can compare what I would deem as “real” events (subtract bugs, headlights, swaying plants etc) . I have something to compare to see if the WCO correctly captured or missed an event.

Yup. I have a member of the household that does gardening throughout the day, everyday walking all over the green zone outside and inside the fence, left, right, up, down 30-60 events per day. Factoring the 1 min cooldown on the WCO, subtracting false events from the V2 and comparing WCO events with the camplus V2 events I’d probably say 95% of the time there is a matching event from the WCO when the V2 records something. That being said the area covered is not that big (maybe a 30 foot diagonal distance from the WCO to the path outside the fence). Given the range, the PIR performs pretty well for me.

That’s good for me to hear, I’m all good for New Years purchases, waiting to see what Wyze does to the Camera next 90 days or so.