Howdy all,
What I’d like to do is have one of my Bulb Color come on (for a short amount of time, maybe 5 minutes) when one of my Wyze cams detects motion.
I’ve got it set up to come on when motion is detected however it just stays on. Is there any way to have it turn off after a certain amount of time? Anybody have any ideas??

I appreciate any thoughts!

Yes. Reportedly you can kick off two rules at the same time based on a single trigger. The second rule would be pause and turn off. I think this was done in Alexa.

Thanks for your idea…though I’d really prefer to stay within the Wyze app if at all possible. I’m just not a huge fan of Alexa.
Maybe I’ll give it a shot if I can’t figure another way.

Thanks again for the reply👍

The best method I’ve found is using the (currently unavailable) Sense v1 Motion Sensors because they have a Device Trigger for when the Sensor “Becomes Clear” of motion as well as “Has Been Clear for X period of time”.

Unfortunately the Cams themselves can Trigger on motion but not the clearing of motion.

Sounds like with Wyze Home Monitoring right on the horizon they should have the v2 Sense Motion Sensors (and required new standalone hub) available in the next few months.

Your answer is better than mine. You have described the best method available if you want to have it go off simply after a period of time rather than by lack of motion for a period of time. It is a good compromise solution if the Motion Sensors aren’t an option.

It’s especially viable for OPs scenario using Camera Motion as the tigger. (Alternatively, if you use a contact sensor opening as the trigger, there is no reoccurring trigger to keep the lights on even if the area still needs light. Becomes harder to pick the optimal time to turn off bulbs.)

If you set the “Has been on for” time for 10 minutes or longer, as long as there is motion the light will not turn off. The camera will always pick up motion and trigger the light on rule before the light times out.

I wanted to turn the brightness up on the garage lights when a car pulls up in the drive way on my v2, then dim back down when motion clears just like the motion sensor. Nevermind. The solution above would be to turn it off completely.

You can set the brightness of a Wyze bulb in an Alexa routine. 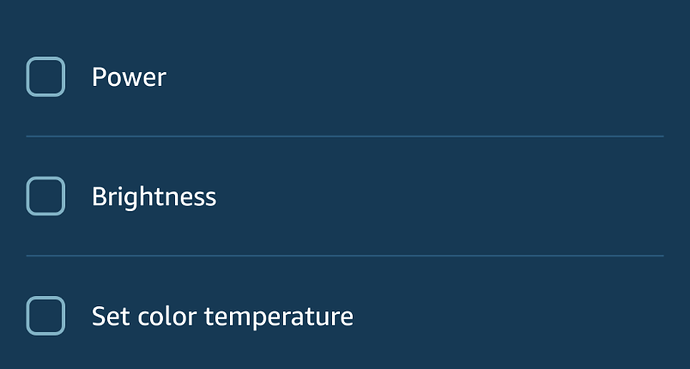 yes I have this routine setup on others, but there is no way to have alexa motion detect on v2 and raise the brightness on a bulb and then dim it after set period of time

Yes please, add a time out option in the rule so the bulbs can revert to their previous status.

Nice answer and workaround. Additional rule functionality is needed and could easily be added right into rules.

Please add duration-defined actions (i.e, if Cam 1 detects a person, turn on Plug 1 for nn minutes (and then turn off).

Please add a rule trigger option to be another rule triggering (i.e. if Cam 1 detects a person, wait nn minutes and then turn off Plug 1.

I was able to have the garage lights turn on to max brightness with the V3 motion in the front yard. Then set a rule to dim the lights after one minute, then another rule to turn off after 2 minutes. I set time parameters between 9pm and 6am.

So, I tried this rule set-up on the front porch of my house, where I have a V3 and a Wyze Bulb…

Then, if bulb has been on for two minutes, turn bulb off as second rule.

The problem is this: the V3 sees the bulb turning off as a motion event, and turns the light right back on…and so on and so on every 2 minutes.

How do I prevent this?

(Incidentally, my dad has the Wyze doorbell with same rule…it does NOT see the light turning off as a motion event)

I have the same issue. Using detect person, rather than motion, in the rule seems to avoid the problem, if reaction to people is what you want to accomplish (and if the detect person algorithm proves reliable).

Might be nice if Wyze created some option for an exception in the detection for just a second around the time of a turn off command, just to avoid this circular problem.

have the same issue. Using detect person, rather than motion, in the rule seems to avoid the problem, if reaction to people is what you want to accomplish (and if the detect person algorithm proves reliable).

Might be nice if Wyze created some option for an exception in the detection for just a second around the time of a turn off command, just to avoid this circular problem.

Yes. But the problem with this solution is that there’s a delay. Because it has to go to the server first and identify the motion as a person before the light comes on.

Perhaps, but does the motion detection not also happen on the servers? In any case, my experience so far is that the delay between person detection is quite small.

The “regular” motion detection is noticeably faster in turning on the light than the people detection. At least on my set up.

I blocked off the sidewalk around the light so the motion doesn’t make the light go in a loop. Hope this helps!

are you aware of a way to do this with the switch? I have my exterior lights connected to a wyze switch, and set a rule to turn on when my driveway camera [v3] has a motion activation, between sundown and sunrise.
I don’t find any options like “has been on for” or any way turn the light back off after an activation.

I don’t use alexa, so looking for a Wyze only solution.
thanks!