So, I decided to test out the time lapse feature last night, and upon checking my album this morning, I see that it is there… The only issue is that when I click on it the download icon disappears and shows 0% which I would assume is the amount downloaded.

About 5 seconds later I get an error message “Network not stable, please try again later.” I have tried viewing on a different device and on wi-fi as well as data connection. 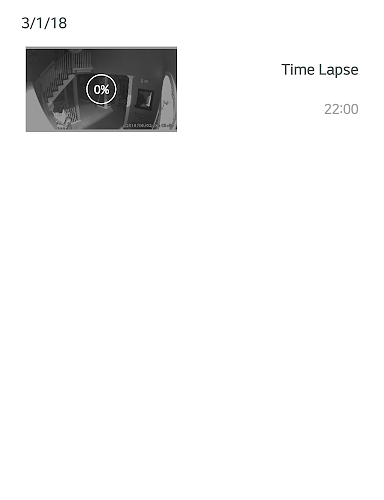 Also, not sure if it is related, but I have been getting a lot of instances lately when I pull up my cams and see the alphanumeric name of the camera instead of the alias. Then at some point, the app normally crashes, reopens and everything is good again.

Hmm, that is weird. We haven’t received reports for that. When you said alphanumeric name, do you mean the MAC # printed at the bottom of your camera? Can you take a screenshot of your phone?

If you have a crash, please open the app again and submit an app feedback right after the crash. It will include the app log. Also, please put in a brief description of what you did right before the crash. Thanks!

Did you ever resolved the issue with the download ? I’ve been trying to use this feature too… I’m on the WyzeBeta app on iOS and setup the Time Lapse to record for about 5 hours my backyard with one pic every 30 secs… After the time is up, it showed up in the album, but with a download arrow, on which when I click it only says “Time Laps video does not exist”… I’ve not checked yet the SD card to see if there was anything in the folder… going to pop in the card into my netbook tomorrow though…

that was indeed fixed in one of the latest firmware. Ive not had any issues in the many ive made and downloaded. if you are all up to date but are having issues now I would guess to reason that your issues is with the particular card you are using. as a rough personal guideline, if I know im going to be doing a large lapse, I usually format the card…in my mind, it might help prevent over write errors…but thats just what I do personally.

what kind of card are you using?