Finally made time (maybe 30 minutes) to swap lenses on my V2.

This particular V2 has spent the past year outside in a birdhouse enclosure. It was pointed at a fairly useless spot so I figured I’d repurpose it.

I did manage to accidentally reset it while trying to focus the new lens. Since it was still out of its shell I was able to put the factory lens back in and get it to scan the QR code.

It’s a 25mm lens from ($15 on Amazon). I just got lucky that the 25mm field of view covers the swingset from the window I was planning on sticking it in. I have no worries about IR window reflections because the swingset doesn’t get used a lot at night. Though I did disable the IR LEDs because I’m not an animal.

As a side note: I hope the outdoor cam is as easy to work on. Obviously opening and swapping the lens could ruin the weather resistance, but it could still give a great platform to start with. 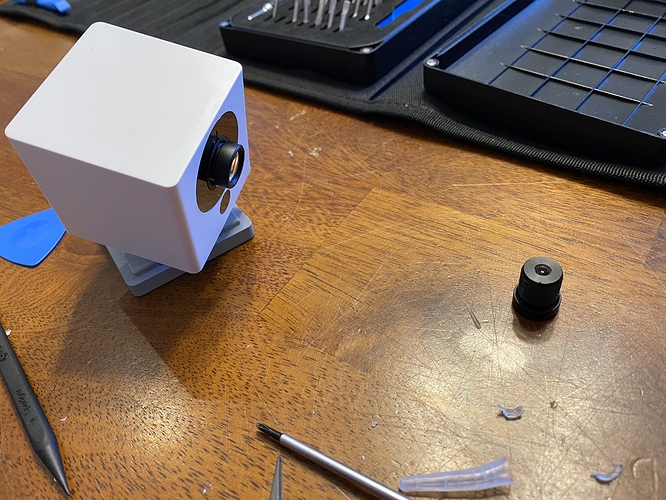 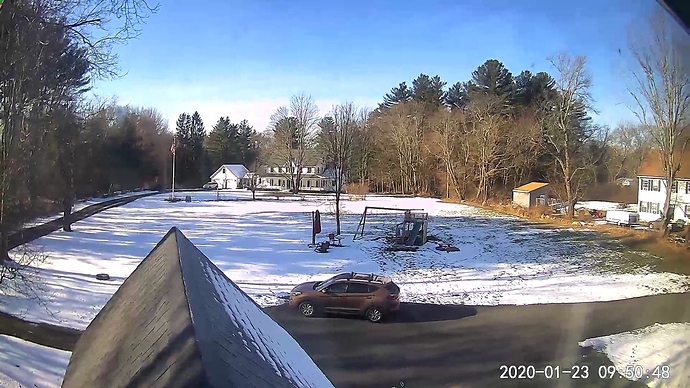 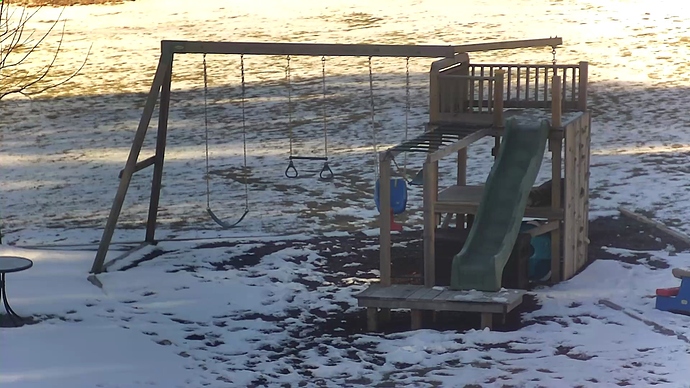 thats pretty impressive. if you happened to do a step by step thats something I would love to see, just to see how you did it.

BTW, and not that it really applies in this case, but my biggest issue is finding lens without a IR filter, or rather one listing whether or not they have an IR filter. The Wyze cam of course has a mechanical IR cut filter, which allows it to both show the correct colors during the day (through a IR cut filter), and show IR light at night by lifting the IR cut filter.

Just so you can spot the difference, without a IR filter UV light (invisible to the human eye) is displayed as kind of a purple color where green is usually seen. 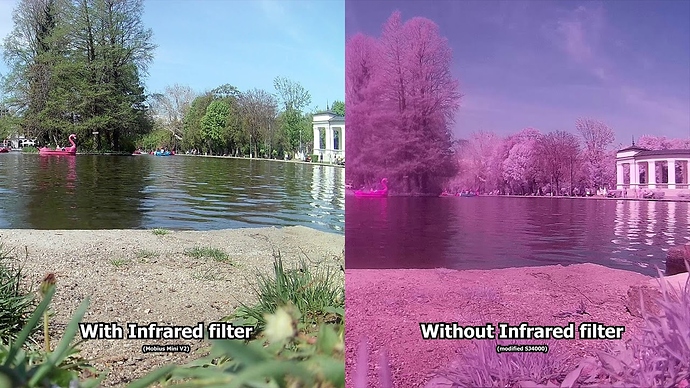 I’m new to the Wyze cam community. This is a very good telephoto example and similar to what I need for one of my cameras.

I have a question regarding the lens you used. In the post where you link to the Amazon page it shows and IR lens, but in your last post, if I’m reading it correctly you say a non-IR lens is needed to avoid the purple tint during the day.

I guess I have 2 questions,

Thanks for the help.

You want a non IR (filter) lens for two reasons. 1, the wyze cams have a mechanical IR filter (that clicking noise you hear), and 2, if you want to use the built in IR lights on the wyze cams.

So in short, Only worry about a IR filter if you need the IR (Night) lights. You won’t see purple (UV light) either way with a wyze cam because they have a IR filter that switches in and out of place automatically.

Thank you so much for the help. That’s kind of how I was reading it, but needed to make sure. Now the hard part, finding one without the IR filter.

I destroyed a V2 camera after ordering the recommended lens from Amazon. LoL. Ended up breaking the black WiFi wire on both ends. Wasn’t sure how to remove the connector from the circuit board. Should have lifted it straight upward, but the wire came out of the teeny tiny connector. Used dental tools purchased from a surplus store to open up the metal tangs on the connector and mash the wire back in place. Got it all back together and had forgotten to set the focus. Disassemble. Break the other end of the short WiFi wire from the antenna. Considered buying a soldering gun. Remembered I gave away the last soldering gun due to lousy soldering skills. Concluded after a few hours that I was wasting my time. Maybe next month I’ll experiment with another camera. Couple lens swap videos on youtube which others put up are pretty good.

I go ahead and pop out the black part on the case around the lens, which allows you to fine tune the focus after everything’s back together. You can pop it back in place from the outside later. As far as the antenna and wire, the connector size/term to look for on amazon is “U.FL” (because there are different sizes that look alike in the pics). If you go for an external antenna like me, there’s an exact spot to put so that it doesn’t interfere with anything, and so the wire lines up between the usb connectors.

btw, Anymore I just peel the flat antenna off the inside of the case because it’s such a pain to reconnect the wire. It’ll stick right back.

Thanks for the tips, I never would have thought to consider replacing the antenna. For the possible future benefit of others, be really careful when disconnecting the U.FL connector from the circuit board. Lift it straight up, possibly with light pressure using needle nose pliers. And don’t flex the end of the wire which is attached to the self adhesive antenna sticker because you can easily break the connection. Consider taking photos of your disassembly work because you might forget which way something goes back into place. The screws are teeny tiny and easily lost. I used a refrigerator magnet to keep them together / from getting lost. Magnetize your screwdriver ahead of time. The screwdriver I use on my eyeglasses worked great. One of the circuit boards has 4 screws which need to be removed. Don’t initially remove the 2 screws which pass through a brass fitting (you can remove them later, after the circuit board has been removed from the case). As others pointed out, you can snap the large black plastic piece out of the body to facilitate focusing the lens (and snap it back into place upon completion). I took this opportunity to spray paint the body to match the trim colors on the house so the camera will blend in better. I await external antennas ordered through NewEgg.com because the shipping was cheaper than Amazon. 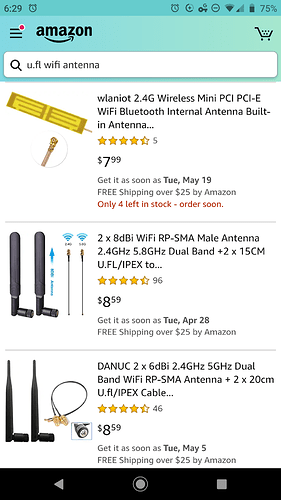 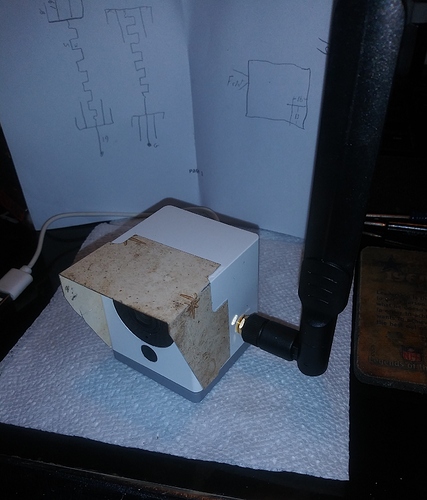 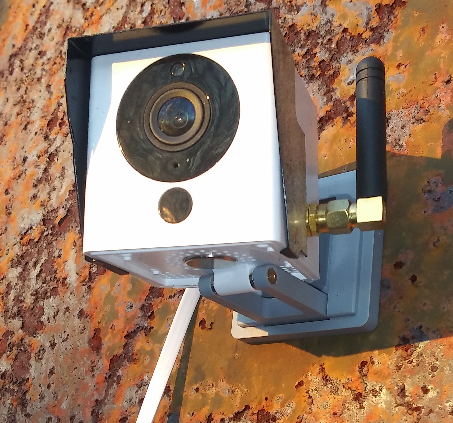 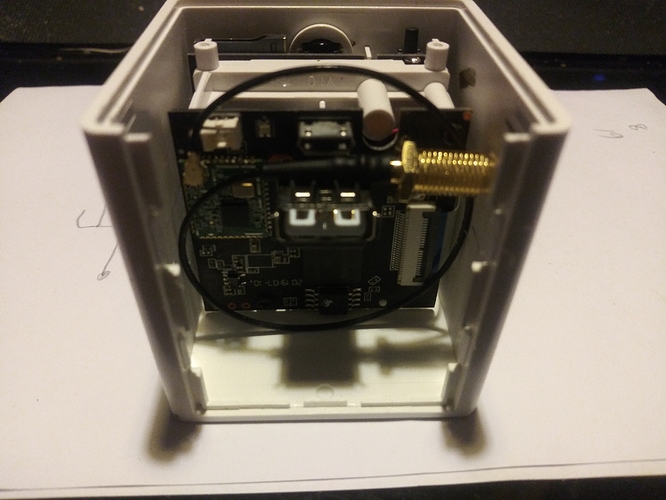 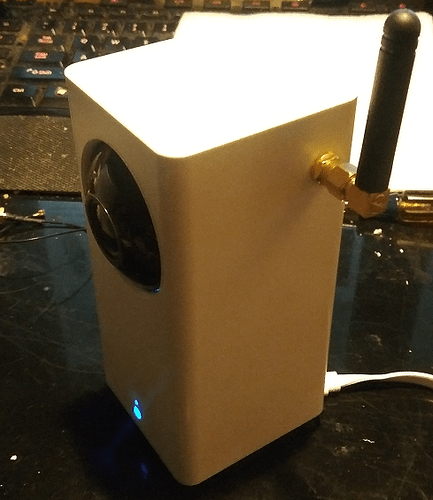 I wonder if this would work with the Webcam firmware to make a better webcam…Looks like 6mm lens would give about a 60° FOV. That’s about the same as most webcams.

It might, but focusing it would definitely be trickier at that distance.

For the benefit of others who may order a U.FL external WiFi connector, make sure they’re shipped from a reliable source in the USA. I failed to observe at NewEgg.com that my order was shipping from Europe and it got lost in transit after a month. Which caused me to wonder this morning if a USB WiFi dongle could be plugged into the camera. I have a 2.4ghz dongle lying around and I’ll try that later, though I don’t expect it to work. I did get a soldering iron and completely fry the teeny tiny U.FL connector after burning my finger. Most likely I have reduced a cheap camera to Spare Parts which I’ll never need.

Finally received external antennas and finished a FrankenWyze. Screenshots of before and after views appear below taken indoors. 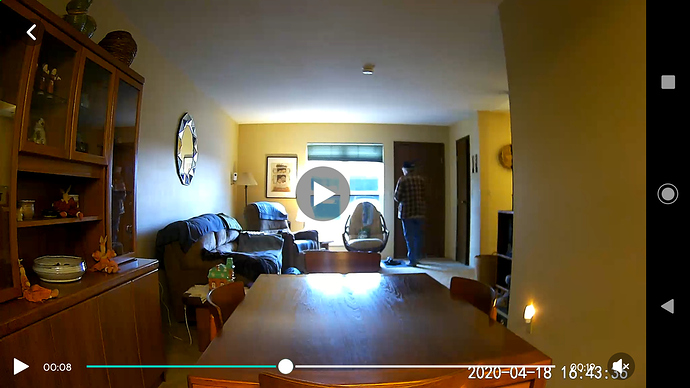 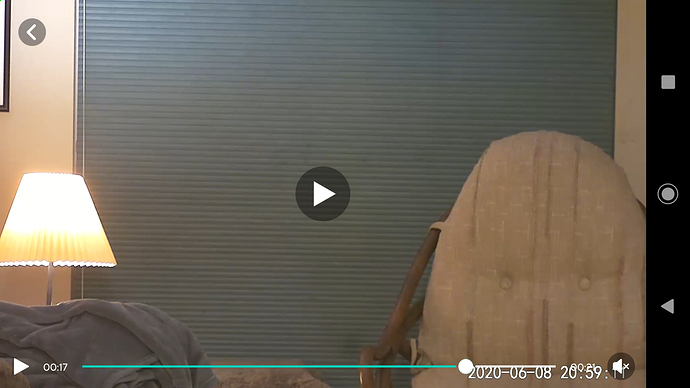 Has anyone tried putting a zoom lens on the Pan or Outdoor Cam? I’ve got one on my v2 and works great! Instructions were very helpful.

If you install a telephoto lens in a Wyze camera it may backfire. In my experience, the motion detection grid becomes unusually highly sensitive in conjunction with a telephoto lens,

just a heads up, not looking for a cure.

After firmware updates in late November 2020, my V2 with telephoto lens is so sensitive to motion detection that it records a motion event clip every five minutes regardless of any motion detection settings. Even with only 1 square set in the detection grid, an event is recorded every 5 minutes. The camera is firmly mounted indoors on the second story and pointing out a window.

Is that the firmware which has the multi-zone detection feature? If so, that feature appears to be broken and rollback is recommended. The extra sensitivity may not be due to the telephoto lens.