I am trying to install my controller but can’t figure out the wires from my old Rainbird system as I have two white wires as well as a ground. Wyze support and the installation instructions in the app aren’t any help. Hoping someone else has/had a Rainbird system you replaced.

Does this look right? What about the extra red that was attached to a screw on my old system? 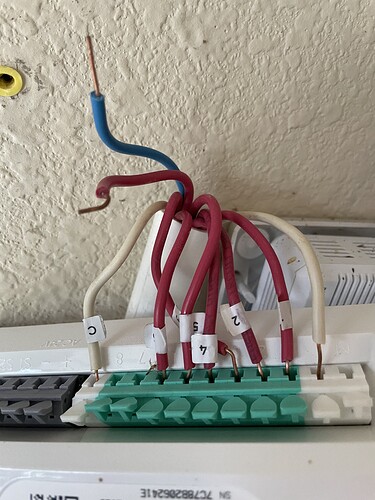 I think so. The white should be the common ground. And the two C terminals should be the same. Do you have a rain or soil sensor? Any idea what the blue and other red wire is for? You might want the trim the wires for neater installation. Red number 5 and 6 looks good. Just trim an 1/8" to a 1/4" off the others so the insulation butts up against the plastic white or green connector.

Could be a master valve. If your previous setup had a transformer it could be power, Or as mentioned a sensor of some sort. If possible I would trace that wire and see where it goes.

I don’t know what the blue wire is for, it wasn’t connected to the last box. The red was wrapped around a screw as a ground? That’s why the copper is hooked. Not sure what I need to do with it. I do have a rain sensor that never seemed to work but that is all separate wires and connections

I lost the picture I took of the wiring for the old box and trying to find ANYTHING on how to wire a Hydrorain is next to impossible.

Can you take a picture of the other end of the wires? Do you have a well pump?
The way these things are wired very simple. The number 1-8 supply current to one wire of the water valve, the red wires. The other wire on all of the water values will be all connected together and attached to the white wires. That’s the return path for the current. It’s AC so there’s no +/- polarity. When it’s time for a water valve to open, Wyze controller sends current to the # wire. If you have a well pump the two white connectors tell the well pump power on.

I am connected to the city water supply so no well connected that I know of. I will follow the wires when I have time and then try it again.