I just tested it with multiple alarm recordings, before choosing one (First Alert, Honeywell) and none of my Wyze Cams detected the alarm sound even though I held the sound source an inch away from the cam’s mic.

So, it apparently doesn’t work… I’d really like to know why. Am I doing something wrong?

Hello @coffee.is.coffee Just for the record, I decided to try mine. I turned all the setting on in the app and activated my smoke alarms. It did work the first try. These are my setting I used for example. 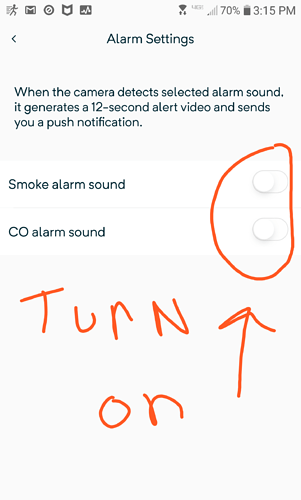 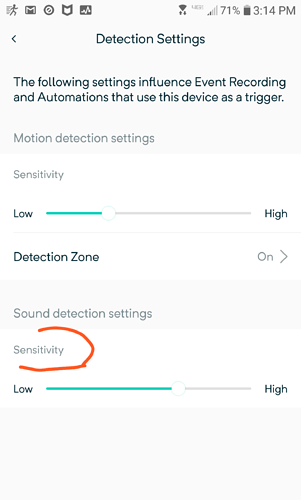 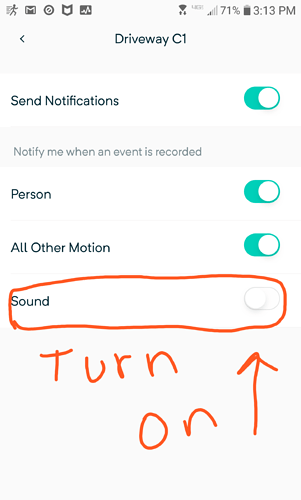 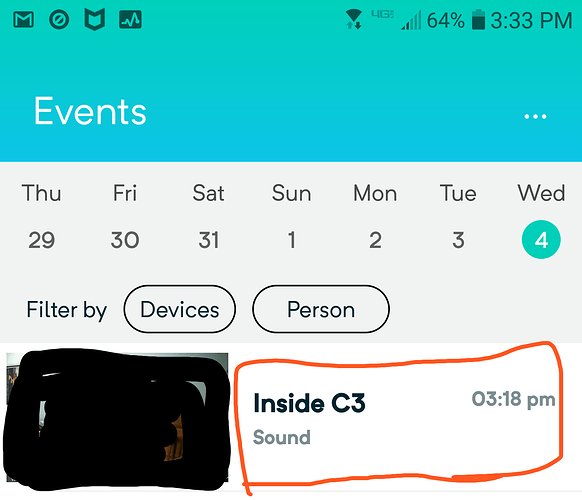 I double checked before trying, everything’s on and sensitivity is at 60

That is really strange. It should have worked for you then. This is the first time I tested this feature. If you want further assistance, you can submit a request for support. Also, the logs to that camera would be helpful to resolve the problem.

There have been numerous threads about the Smoke/CO2 alarm function and I believe in most cases it was either a configuration issue or the alarm was emitting a frequency that the Wyze Cam did not recognize:

A few days ago the smoke alarm went off in my kitchen and neither cam I have setup in the house (one in the living room approx 15ft away) or one on the 2nd floor detected the alarm and sent/logged a notification. Using Wyze Cam 2 with the latest firmware. Any ideas?

I recall seeing a post that actually listed the frequency/pattern the Wyze Cam is listening for, but I can’t seem to locate it at the moment. 3100Hz was the standard frequency mandated for smoke alarms but some newer smoke alarms have low-frequency 520Hz or dual-mode alarms.

I have personally received smoke alarm alerts from my Wyze Cam v2s so I know it works, but there may be some changes necessary to make it a more robust feature.

Had this turned on but never tested it. When I tested in on my Pan Cam, it sent an alert but it was just labeled “Sound.” It didn’t say Smoke Detector. I didn’t receive a Push Notification for it either. Just an entry in the Alert box. Will have to keep an eye on it.

it was just labeled “Sound.”

That was the only label I received too was the “Sound”, but I did receive an alert notification for it. I will look into this some more since this topic has come up again.

Edit: @thequietman44 How was yours labeled when you received the smoke alarm alert? Do you remember?

I just tried it again with the sound notification turned off this time and it still worked.

However, the event notification label was “Sound” and not “Smoke Alarm”. 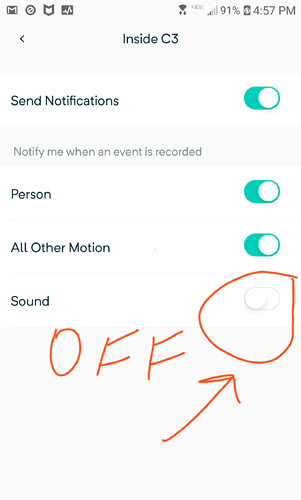 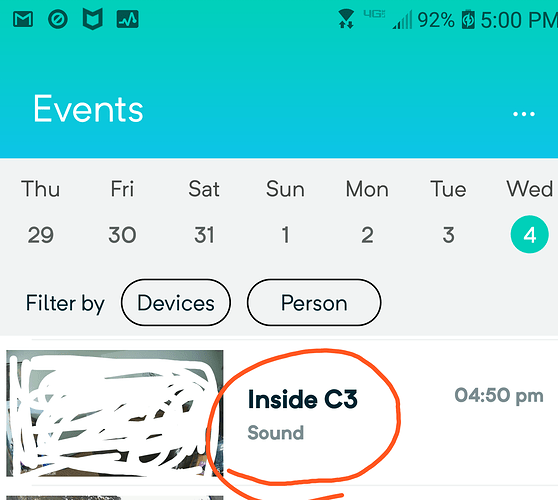 I finally found the pathway to turn these things on and it says my camera is not connected. Connect to what? I am able to view the semi live feed. (major delay time). I was trying to turn the alarms on. My sensitivity is LOW.

my camera is not connected. Connect to what?

My camera will say that too if I don’t turn on the camera first before I try to adjust or enable the smoke alarm settings.

Is this what you are referring to ? 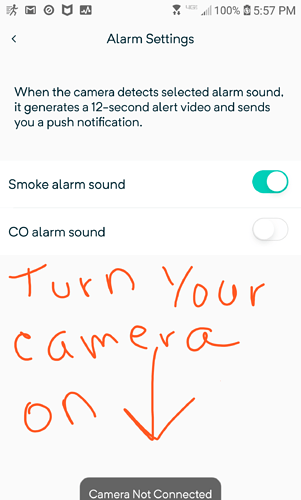 Below is a recording of the sounds I believe the cameras are supposed to detect, provided by the Wyze Devs. I believe the first half of the recording is a smoke alarm, and the second half is a CO alarm. I believe they are based on a 2014 update to NFPA 72, the US National Fire Alarm and Signaling Code. So you will probably need a US smoke detector less than a handful of years old.

I have 2 cameras within a ‘room or so’ of my computer and my smoke detector, which is on the hallway ceiling just outside my computer room. I tried playing the recording of both sounds from my computer (which has a high fidelity speaker bar) and using the ‘test’ button on my smoke detector. My results were mixed.

So I moved a third camera into the same room as the computer, and played the recording. It correctly identified both sounds right away. One of the other two cameras also picked up on the smoke alarm sound.

Then I pressed the test button on the smoke alarm, and all 3 identified it. Remember, this was spotty when I only had two cameras, so I assume I just got lucky.

They did all say “Smoke [or CO] alarm sound detected” each time. Sound alerts were off, only had smoke and CO alerts on, w/sound detection setting @ 100%.

At no time did either of the cameras outside my computer room report the CO alarm sound playing from the computer, however (and it was very loud!)

So maybe all the wall ricochets created an echo chamber and distorted the sound at the other two cameras? Unfortunately that would mean the camera and smoke/CO detector would need to be pretty close to the camera.

But the one in the room with the recording always correctly identified both sounds.

Here are the sounds:

Hi, @serban! I’m the person from Twitter and I was able to get files for this for you today. Still can’t find them on YouTube (which I think is weird). Here’s a file with the samples I pilfered from the devs.

We’re working on making this more reliable so if you’re having false alerts, @ShadowCam, please let us know!

My camera is always on. For some reason last night I was able to toggle those on though. I should check to see if they are still on. It takes me forever to find which pathway to take to get to the correct screen.

It takes me forever to find which pathway to take to get to the correct screen.

I know where you coming from, it took me awhile to find my way around the app as well. If you need any additional help just post me.

Had a weird thing happen today. I have a squirrelcam on my back patio to watch for squirrels eating my fence. Since I can often hear them jump on the fence before I see them, I usually have that microphone active in my 4-camera group view.

Because the outdoor microphone is active so often, I hear a lot of things around the neighborhood I wouldn’t otherwise hear. Barking dogs, people talking, sirens (I have a fire station just 2 blocks away), and various large vehicles, like garbage trucks.

This morning I hear a repetitive beeping. Sounded like a large truck in reverse. I ignore it. Just some of the neighborhood sounds, I think. It’s a work day. Thing is, I didn’t realize it WASN’T coming from the microphone.

Then I get an alert from my clerestory window camera along my roofline in my hallway that it is hearing a smoke detector alarm. I say wow, so it’s true that these cameras think a truck’s backup beep is a fire alarm? LOL. Then I realize the backup sound I’ve been hearing wasn’t coming from the squirrelcam’s microphone, it was coming from WITHIN the house! So I step outside my computer room and listen. The smoke detector I tested with is right over my head. But it’s silent. Where is that beeping coming from?

Other than my tests, I have never seen a smoke detector alert reported by a camera. In all fairness, they had been switched off in the camera settings until I did the test 2 days ago. Well, the first one I saw was reporting an actual smoke alarm! So proud of the little bugger for helping me realize the sound I was hearing as NOT a truck backing up! Could have made a difference if there had been an actual fire!

Smoke Detectors have an approximate 10 year lifespan. This is the half-life of the radioactive material in them. When that material breaks down enough, the detector will start having false alarms. Could only be dust in the air that sets it off. They should have a sticker with their expiration date on them.

Thanks! Very useful info! Looks like mine has a ‘date of manufacture’ on the back. From what I read after I saw your note, I think that’s how most of them go in the US. Well, my manufacture date is 2002. So I guess I won’t be getting it a new battery tomorrow! On the shopping list now, lol. Thanks!

Edit: The one I was testing with in the hall just outside my computer room was made in 2003. So thanks again!

Indeed. Most people mistakenly believe that the smoke detectors last a lot longer than intended.

That is why most of the newer ones that you buy now all have “10 year” batteries because after that duration of time, the effectiveness of the detector is compromised and most definitely needs to be replaced.

This functionality is busted, or is extremely inconsistent. It only reports “sound”, not smoke or CO. So what, Everytime I get a sound alert, I’m to believe my house is burning down? This should not even be advertised as a feature, it does not work, and has never worked over the last 2 years.

For 20 bucks, I can’t really complain, other than to say, if the feature sucks, just stop advertising it.
I have 2 leeos(now bankrupt and shutdown) and those worked. 110% reliable at identifying smoke, co and flood tones and told me exactly what it heard!

I take it back, well some of it anyway. the feature has been advertised since version one but I could only ever get it to work on my version 2 cameras and I just did get it to work on the V2 camera but the wyze pan cam which is right next to it didn’t do anything even though the settings were on.
So it looks like this feature is totally busted on the wise version 1 cameras.

Good thing I only have SIX of the version 1 cameras, I’d hate to get screwed more than 6 times.