Would love to see Wyze come out with a smart door lock that links up with the cameras. Would work similar to the contact sensors to trigger the camera and capture a video when the door is opened/unlocked, but it would allow people to consolidate their current smart locks and contact sensors into one unit. Maybe crazy, but you could also add a camera into the lock to act similar to the video door bells. I can see the battery life becoming an issue with that idea, though.

Tuya has a door lock and camera combination that will recognize your face and unlock the door for you. At least, they announced this at CES 2019.

I haven’t actually seen any products that do this in the United Stated yet though.

I want a true smart doorlock with the ability to unlock and lock it from the app with various triggers (geo location, connection…) also maybe a rfid reader video of my custom truck door locks

I would also like however a simple smart door lock which doesn’t have the ability to unlock and lock remotely but just lets you know if the door is locked or unlocked and sends notifications if the state changes. really it could just be a wyze sensor in a lock. i really only need 1 maybe 2 doors with access control but the ability to know if all my doors are locked before leaving the house is important especially with young children that love to leave things unlocked.

My next project having finished my wyze recessed bracket 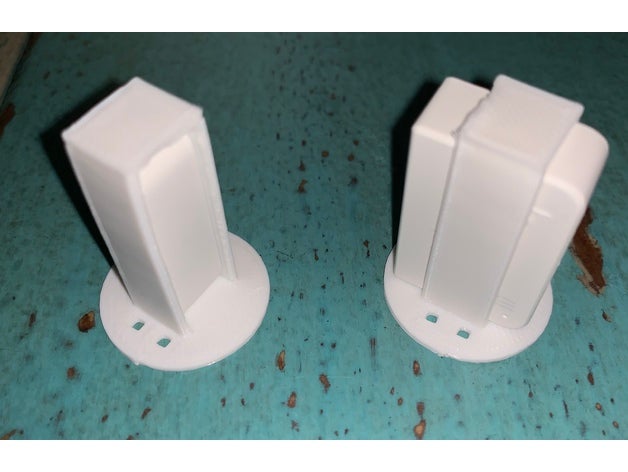 Wyze Sense cylindrical recessed bracket is designed to be easy to install if you want to recess the sensor into a door/jam. It is designed with simplicity of installation in mind. After getting everything connected place the wyze sensor in the...

will probably be a hacked version of this simple smart door lock. However i would like to one day see a polished Wyze solution.

Wyze should make a smart lock for doors. That would be nice.

I’ve looked into buying smart locks for my house in the past and decided against it due to a common issue they all have. Door and door frame material expand and contract during different seasons resulting in the traditional locking mechanism no longer aligning with the door frame over time. This is why sometimes you need to push up against your door or wiggle your key a little to ensure your door locks or unlocks. Smart locks typically attach themselves to existing tradional locks and do not recognize when the lock is no longer perfectly aligned with the door frame and can indicate that the door is locked when in fact the locking mechanism didn’t fully engaged.

It might not be in your wheel house, but I envision a one size fits all, fully integrated lock, that replaces the traditional locking mechanism on an exterior door. Maybe go one step further and design a whole door and door frame to replace existing front and back door. This might be a bit extreme but I’m just brainstorming here as I type.

I, too would like this, or at least integration with existing smart door locks ( although one from Wyze would be preferable).
Power is something to consider here. I have a smart door lock made via Kickstarter by a company called keywe. It has a lot of limitations, but its biggest is that as the batteries that power it get weaker, it starts to malfunction.
It really needs to just stop working, when the bateries can no longer support proper functionality. I don’t know how feasible that is, but then, who knew smart locks were possible in the first place 50 years ago?

I would be extremely nice if Wyze could do this soon. Wyze do you have an update?

That Keywe ought to have battery management in it’s firmware, something simple like regularly checking the battery voltage. A voltage tap might require a hardware change

Seems to me that if Wyze has this IFTTT capability, then all that’s needed is to locate a IFTTT compatible deadbolt

I hope Wyze will continue to research this and develop it soon!!

I think that because there are many choices already on the market for IFTTT enabled doorlocks, and because the Wyze software already supports outputting IFTTT to any of those locks, that it will be seen as a very low priority to develop a door lock of their own

However, what Wyze can do is throw out a step by step guide on using a well known brand example, like from this selection: https://www.kwikset.com/smart-locks/default.aspx

There’s a big difference between claiming that anyone can make IFTTT work, and actually showing that it works without any glitches. I’ve never used the IFTTT service, so I can only imagine that some devices might not implement it properly. I’ve run into this sort of issue with Bluetooth devices all the time. For example, an Alpine car stereo, that if you are streaming audio to the head unit via BT, that all other BT devices inside the car will be jammed. I was trying to use a BT connected OBD code scanner which works with my phone, while a tablet was playing some music. Switching the radio to tuner mode didn’t work, we also had to shut the radio off before my code scanner would connect

Don’t forget to use that vote button at the top of this thread, it tends to get more attention from Wyze when it’s used!

Please consider international users when exploring this. Some current brands, such as Kwikset, only seem to consider US style form factors, others such as Yale offer some more generic products, suited to both locales. Hope this makes sense.

Seems the next logical step after the long-awaited video doorbell.
WYZE video doorbell rings, I can see who is there, and tell WYZE to unlock the door for them.

If this ever happens, I hope the design is slim. The August locks look awful, in my opinion. SimpliSafe just came out with a smart lock that has a really nice design although the “nickel” option is a bit weird in that it has sort of a white frame around it. But yeah, if it ever happens, I think that SimpliSafe lock would be a great starting point for hardware design inspiration.

As for features, there are two things that are important: It needs to be able to recognize when the door is open, so that it doesn’t inadvertantly engage the lock into thin air and end up causing damage to the frame when you close the door. The other thing that’s super important is that the lock should be smart enough to realize when it CAN’T successfully lock itself and give an audible error beep in addition to a warning notification. That’s important because doors settle over time, so if everything isn’t perfectly aligned, a smart lock may fail to lock itself. It’s important that the user is aware of this problem as soon as it starts, so that they don’t inadvertantly walk away from the house, thinking everything is locked when it isn’t.

I think Wyze’s Smart lock could actually fill quite a void in the market. Have you looked at the price of a good smart lock? They don’t even have anything as fancy as mentioned in this thread, like one person’s suggestion of perhaps making the locking or unlocking dependent on such things such as your location, or facial recognition… I’ve found that a good Cam & deadbolt combo runs nearly $250-$300 on amazon. They are all lacking in features at this price point in my opinion. I believe if Wyze can reinvent the webcam, they can sure as hell reinvent the smart-lock!

My only ask is that you include even simple features of other “smart locks” that do not have app accessibility- like the ability to auto lock after a number of seconds. I simply want to take my dog out for a walk and or come in with full hands of groceries and it lock behind me. There would of course have to be a means of re-entry, but a keypad would be simple! Going for a run or walking a dog without keys is such a necessary life improvement. (No need for facial recognition just yet) I’m holding out for a Wyze Smart lock, and I’ll be your first beta tester!!! I’ve literally returned 3 in the past year, and you’re doing great in the cam department. I have no doubts that the smart lock will be cheaper, smarter, and better built.

Please provide some updates on timeline, because some of us are wondering if we really should be waiting…

Would people really want to scrimp on a door lock? And buy it from a company that says their products are not intended for security?

Scrimp? Never did I say scrimp! It looks like if you undercut the price by 25 or 50 dollars, you’d hardly be scrimping, but I assume money is a relative thing. I guess when you compare 300 to 40 or 50, yes, that would be scrimping, but amazon basics sell a simple smart lock for $49, (not app integration) and it’s flying off the shelves.

Their not wanting to say their cameras are for security would go out the window when you’re talking about security products.

MOD NOTE: The status of this topic has been updated to “in development” and moved to the #roadmap.