Shortcut Rules says it failed but it did not

I created two new shortcuts within a camera group (2 V2 cameras). One shortcut turns both cameras on, the other turns them off. I have the turn the cameras on shortcut set to fire at 8:30 am everyday.

It fired on time this morning. Both cameras did in fact turn on, however the event log incorrectly shows the shortcut failed.

I did send the logs in.

It’s obvious this isn’t working properly. My
Event log has always showed failed. But everything is working successfully.

This would be good because shortcut history doesn’t even work right , it shows failed most of the time when actually it worked just exactly as it was supposed to.

Agreed, not new behavior as this was happening in the production app as well. I used to occasionally get a succeeded but mostly failed. Have to see what happens here.

More failures than than succeeded for sure. 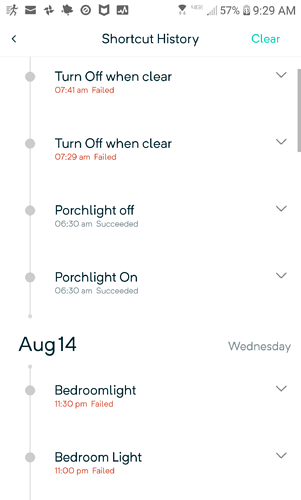 I am with @Loki on this, a notification option when rules or shortcuts fire would be helpful especially as the History appears broken/flawed. I voted. Tried the old “vote early/vote often” trick but does not seem to help here.

I’ve found that sometimes you have to “drag” down on the screen in order to refresh the data and to display current status of the sensor or camera.

Yes that is very true.

I see this same behaviour.