Don’t Try This At Home. I Do Not encourage anyone to take apart there Wyze Devices unless you know what you are doing. That said, I am a Manufacturing Engineer who builds circuit boards and and electronic devices in the USA. I thought it would be beneficial in this forum for knowledgeable people to share their insights on hardware failures.

My story: My 2 week old WCO went offline after working well outdoors; even in some rain. The battery indicator still reported but there was no picture. I brought in then plugged it in to the USB charger. After a few seconds, smoke came out then everything went dead. Being curious, and an experienced troubleshooter, I disassembled my WCO. This voids the warranty and I will not be making any such claim. All the seals were intact during operation and appeared in good condition after taking it apart, There was no evidence of water inside; however, there was some corrosive residue on an IC on the switch board and a burned out trace on the ribbon cable. I used a meter to check the charger; finding both voltage and current good, so it was not an over voltage during charging. No immediate evidence of the cause of the problem I reported the issue, with a picture, to support. I do not work for Wyze. I believe that constructive feedback helps everyone. 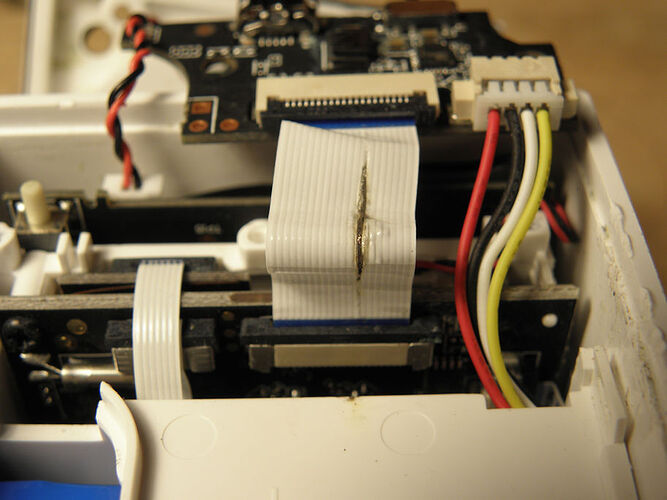 I love when experts make very knowledgeable reports here. they are few and far between. and you took it in every correct path including support. ( especially making note of voiding the warranty here) have you run into such things before? might this just be the type of thing cause by a short circuit due to defect?

Even though, there was not water inside or obvious evidence of water, It is possible that moisture did seep in through the seal on the USB connector as vapor. It went through a 3 day rain period before failure. The small amount of residue indicates moisture reacting with flux residue. Normally, that by itself would not be an issue, but there may have been something else going on. The factory will be able to do a better diagnostic. I have seen similar failures in outdoor devices; it happens. Depending on the statistics, redesign of the weather seals may prevent it in the long run, Generally, I like what I saw in terms of design and construction. This glitch will not turn me away from Wyze by itself. I will continue to try it out for my purposes.

You know, maybe you should look into working for Wyze. You seem extremely knowledgeable on the topic and rather realistic in your expectations of everything you explored. This is the type of help that might really push them to the next level Hardware wise but knowing they buy from third parties I don’t know how much input they have on some of these things

Playback Timing does not agree with timestamp displayed. One of the projects I am evaluating is to show videos of what is happening in different places at the same time. I did a scheduled video from 11:55 PM to 12:35 AM on four cameras and synced the time. I edited the videos to all display the same beginning timestamp and ending timestamp to account for the slow starts and over runs. When I loaded the videos into tracks with the same starting point, the actual run times were off. Two WCOs had run times of 40 min 6 sec; one WCO had a run time of 39 min 58 sec, and the V3 had a runtime of 38 min 59sec. Editing visually to the internal timestamp does not agree with externally measured run time. For the intended uses of the cameras, a synchronization error is not a problem; however, it shows a statically significant error in the digital timing of the cameras which may be a symptom of other things, Hardware guys should check circuit performance. Software guys should streamline to reduce CPU loading.

For the intended uses of the cameras, a synchronization error is not a problem; however, it shows a statically significant error in the digital timing of the cameras which may be a symptom of other things, Hardware guys should check circuit performance.

I had a v2 slung under a window ac housing in an especially driving rain, no special protection. It failed, short-term, but I shook it out and put it in my cotton sock drawer for a couple of months then it was right back to work. Quite a trooper.

One on One the cameras are a good value. The average user isn’t even thinking about synchronizing videos, I’m the odd one, the outlier that ruins the data set.

I know, but look, @Bam is weird odd, too, and you’ve found each other, and I like watching weird odd people, so that makes me… ?

On the off-chance the forum software is correct, Happy Birthday @Bam

, may you continue to rock lively!

and yes the Forum information is correct I have endured yet another orbit around the sun.

Another comment on timing, I setup a v3 to record a clock. The clock is an atomic radio set device that updates every hour using the NIST radio broadcast signal. In this case, the v3 started to get ahead of real time, according to the time stamp. the greatest difference was ahead by 4 seconds after 14 hours running, When I turned on the room light, the camera switched from night vision to standard, but also reset the time, so that it agreed with the clock time. That would be OK for individual camera views of short clips, but still a problem for synchronizing clips from multiple cameras. So far, the v3 and WCO are looking better for my wildlife observations, but are not precise enough for my other project.

I only see this one way: factory flaw.

In two weeks something meant for the outdoors stops working. Things slip past QA with everything you can buy and sometimes things are DOA. It happens. That what a warranty is for or in two weeks that’s what a store return policy can do many times.

Past that, the reason why isn’t necessarily of any use. Obviously, if its rated outdoor it will still have a better chance of longer life covered where no weather can get to it. If its a flaw inside then there’s nothing you can do lol.

When I turned on the room light, the camera switched from night vision to standard, but also reset the time, so that it agreed with the clock time.

I am repeating this on this thread because it looks important. I just solved my own erratic Wyzw Plug problem two days ago. I got tired of the knock outs, so I did a full investigation of everything connected; starting with the plug and the apps.

The short answer is that I found out that the outlets in one room did not have a ground wired into them ( old house, old wiring codes ). Without a ground, the surge protection in the plug does not work. Every time it turns off, then on again, it runs a risk of knocking out. The quality of your home wiring is key to any electronic problems that Wyze, or other manufacturers, cannot plan for. Once it wad grounded, everything checked out OK on the meters. I was able to wire the ground myself, which most people SHOULD NOT DO on there own. Get someone trained and experienced in electrical wiring. I learned everything I know about electricity from a Master Electrician.

You can get an outlet tester at hardware stores for less than $10. You plug them in and the LEDs light up to tell you if the outlet is wired correctly; or what is wrong with it. Go around your house testing every outlet and writing down any that fail. Call a general handyman first to get them fixed. He will tell you if there is something more serious that requires a licensed electrician.

Hey, I was just reviewing this thread from the top and I realized that there is an important detail missing. It starts out with me taking apart a dead WCO. Event though I clearly admitted to taking it apart, which voids the warranty, the Wyze guys gave me a replacement camera FREE. I did thank them immediately, I just thought you should know how good customer service is at Wyze.

This is not bad for a ho hum device that maybe checks in with a time server once a day, but I agree, why not check in more often? Maybe once an hour?