1/24/23 5:48 PM PT - The setup and event issues impacting Wyze Cam OG and Wyze Video Doorbell Pro should be recovering. If you are still experiencing troubles please reach out to Wyze Customer Support.

4:35 PM PT - We are looking into reports of failed setup and event issues impacting Wyze Cam OG and Wyze Video Doorbell Pro. We will update this page with more info when it becomes available.

Thanks Jason for letting us know

Have around 5 various Wyze cams connected to my home network, and my two new OGs are the first cams to fail to connect!

Pressed setup button, camera said it was ready, followed the in-app instructions, app found the cam, paired, selected network and entering password, camera said “connecting to network” and then “wifi connected,” however the app hangs on “Adding Wyze Cam OG” then says “Connection failed.” The only option is to tap the “Re-type password” button, which doesn’t allow you to do that, rather it just tries reconnecting, and eventually does that in a loop until bailing out.

Power cycled the camera and app/phone. No dice. One thing that’s odd: after power cycling the camera will say it ready, but regardless of what I do with the Setup button on the camera, the red light (nor any light) has come on again.

Does anyone know how to hard reset? Holding Setup button for 10 seconds while plugging in doesn’t do anything.

I’m having the same EXACT issue. I have various V1, V2, and V3 as well as pan cams… i just hooked up a V3 just yesterday. Got two OG’s. Same issue. it did let me add one but it couldn’t connect. I tried to hard reset- that’s a joke. Now I can’t even remove the that particular camera from the app and start over. This is extremely frustrating.

We are looking into these reports now, could you both submit app logs and give me the log number?

Unfortunately I’ve never been able to add the device so I can’t pick a device log, however I do have ticket open (2743529).

Same issue, I ordered these after my pros wouldn’t connect after a firmware update. I’ve disabled WPA 3 as that was the work around for the V3 pro firmware issue. Now I have two new cameras that get in network but can’t connect to Wyze.

I can’t submit a log since the device never connects. My Wi-Fi is an EERO

Same exact problem… Event recordings also did not upload to cloud throughout the day. I feel like the two are connected. I have a Pan V3 and cam V3 and those are working just fine. Event recordings working for them as well… could be a cloud issue.

Like others, I cannot add the device, so I cannot get a log ID. How do I submit a ticket? If I have to…

I also just received a Wyze Cam OG and it is failing to connect. It connects to Wyze Cloud but fails next step Adding Wyze Cam OG. 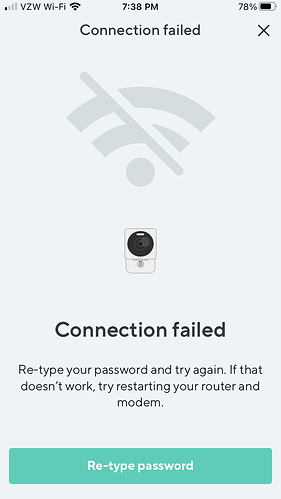 My camera has been connected for about a week and I noticed about 10 minutes ago that it would not connect anymore. I did send in log files.
It looks like the last event was recorded at 4:32 EST

Mine was connected for a day… it was not saving event recordings and I read to delete the device and re-add it. Now I can’t add it.
Like I said… sounds like a cloud issue with Wyze

I have the same problem, this morning i got to connect one (OG camera) but later in the afternoon when I tried to connect my second camera it failed to connect to the wyze cloud.

I just got an OG today and setup fails at the same point but with a different message. I have a V2, V3, and an Outdoor Cam and all have worked great with no setup issues. But with the OG setup I get to the point where the camera says “wi-fi connected,” and then 10s later the app shows “Pairing Failed” with the message “Make sure your phone is near your Wyze Cam OG with Bluetooth turned on.” Yes, it’s on. I tried setup with both my phone and a tablet (in case there was some weird Bluetooth incompatibility), and it fails in the same way on both.

I have the same issue too.

It says connected to wifi, completes the check, and won’t go further, asking me to retype the password 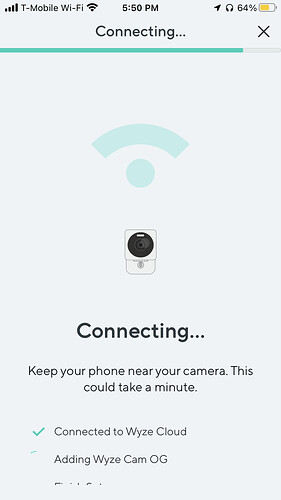 Is anyone experiencing issues able to get through setup now?

It works now! Thanks!

1/24/23 5:48 PM PT - The setup and event issues impacting Wyze Cam OG and Wyze Video Doorbell Pro should be recovering. If you are still experiencing troubles please reach out to Wyze Customer Support.