I know Wyze says 32GB is “max”, but they have never told us the real reason why. The stated reasons are a bunch of hooey.

For the camera anything above 32gb sd need to be exfat format. How I know it the only why I can get a 64gb sd working in mine camera.

window 10 would not work, I download a sd format and this is the only way I got it to work.

What do you mean download a sd format? What is that? Where can I get it?

My WYZE cam corrupts the SD card just about every time there’s a firmware update. As others have stated, there’s no notification. The app just says that there’s no SD available, so you can’t even use it to reformat the card.

The only solution I’ve found to this is to first format the card in Windows, then transfer the card to a digital camera, and format again. My camera is a Panasonic Lumix, but I’ve heard it works with others. At this point, the WYZE cam will finally recognize the card.

what cards are you running?

Hi Bam, thanks for your response.

I am the resident SD card nerd around here

in looking those cards up more than likely it is the card itself that is the cause of the corruption. standard SD cards such as those we developed when video recordings weren’t nearly as popular. typically they were made for much smaller files that would be accessed much more intermittently. in fact in standard cards like your but from other companies using them in applications such as our cams will actually void their warranties as they have noted their short comings for these applications.

with the advent of high definition video recording in things like our cams and things like dash cams the need for a much more durable card was born. enter the age of the high endurance cards
high endurance cards are made for the larger files and constant reading and writing. I did a lot of research on this and have in the past been in talks with developers at wyze about this very issue in the use of standard cards with the Wyze family of cams

I did a write up on them a few years ago to see what people use and from that point to now the overall winner was the Samsung pro endurance cards. I have run them for a couple of years now without any issues at all.

+1 on Samsung PRO Endurance. I did the math and for this camera and the bitrate for writing files, I rate the 32GB Samsung PRO Endurance card at theoretical minimum 27 years lifespan when installed in a Wyze cam. The point being that it is rated for endurance and the specs are very clear about what that means.

more than likely if you were to simply switch to a card of the high endurance persuasion this issue would be gone and wont come back.

I will be trying to get in touch with the devs I had previously talked with and see what can be done as this is a fairly common occurrence and something that by now they should at least have some sort of disclaimer for.

Thank you so much for detailed information, It means I should replace my Wyze cams’ memory cards with high endurance ones instead of wasting time try to reformat existing cards and at the end garaging them,

yeah, one option ( although it is just a bandaid ) is to put tham in a PC and do a full format on them. that should clear them of any errors and recordings, but you will likely run into the same issue down the road with that card.

here are the ones I purchase and for the price ( and warranty) it’s a pretty solid deal. 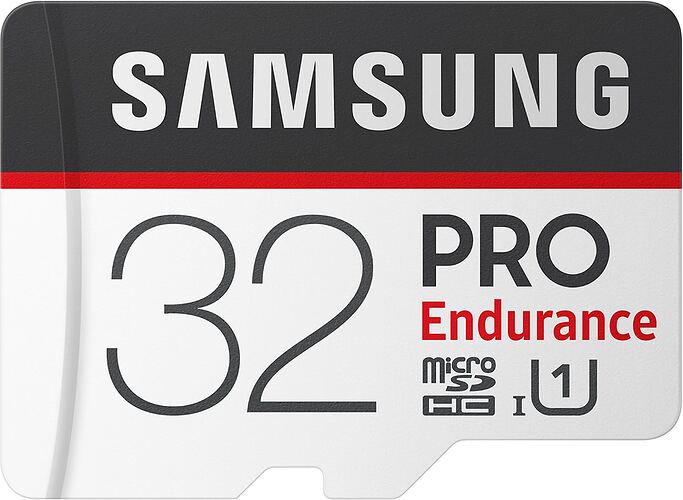 Two years and counting on the Samsung Endurance PRO 32GB and no issues. I have these in 10 cameras and then a 128GB in another. As you know, storage endurance rating is the key and storage that is designed for being written 24/7 (surveillance, body cam, gopro, etc.).

Also, these modern endurance rated cards are so cheap due to the advances in controllers and ability to use TLC instead of MLC. Incidentally I also use these cards in multiple dashcams, which have much higher bitrates than WyzeCam for writing. All systems are green and happy when you have the right MicroSD card.

same with mine! in fact I’m yet to hear of one pro endurance corrupting!

and I have to remember that post…its mine

it’s amazing how the prices even for HE have come down. I actually dont run samsung in “everything” though

I love my transcend cards. they cost as bit more but in some ways it is worth it. I use trancend in at least one dashcam… and samsung in the other

I had a regular SanDisk SD card in my dash cam. After a few months it became corrupted. Nothing I did produced a positive result. SanDisk tech support said the warranty was void because it was not meant for constant read/write, only intermittent like with a digital camera. Their High Endurance SD card is designed for constant access. Found this out after running regular SanDisk SD cards in my previous camera setup AmCrest). Now every SD card I purchase is High Endurance. DIL got all the regular SD cards for her digital cameras.

All of the 3 of my v2 WyzeCams keep corrupting High Endurance Sandisk SD Cards within months. It’s gotten so bad that I don’t use the cameras anymore.

I’ll happily send all three to Wyze for additional testing with their preferred SD Cards, I’m confident they will chew thru anything at this point.

Can you post a picture of the card/s that is corrupting? I have heard some interesting things about SanDisk I’m just curious if this is the same card

I can confirm that MBR should be used. Tried GPT formatting on a Mac and the cards were not recognized. Formatted as MBR and they were.

So the combination that worked for four Wyze Cam v3 cameras with four TeamGroup 256GB High Endurance micro SD cards is: MBR for drive format and ExFAT for volume format.