I am on the beta channel for my Pixelbook (Chromebook) and I am able to use the Wyze app on this Chromebook. I downloaded the latest Wyze APK from apkpure.com (Wyze App version 2.15.35) and then used the procedure documented at How to Easily Sideload Android Apps on Chromebook [Guide] | Beebom to install the apk file. Did not need to run developer mode on the Chromebook or use the Developer Channel. Unknown if this also works in the Stable Channel.

OMG thank you. Ive been trying to do something like this for months. I have an Acer spin 11. Im also on the beta as I love testing new features. Ill have to try this to see if I can get it to work. THANK YOU THANK YOU THANK YOU. I just havent had time to look this up as most of my cams are dead outdoors right now. Havent had time to charge them either. Working 7 days a week at nights makes things harder.

Tried it out. Took a little bit to get it up and running due to my error. Thought I could be on the beta channel had to go to dev channel. As soon as it got up there were crashes or reloads as I would call it everytime I changed size of the app screen. Couldnt go sideways at all for full viewing and the controls for the pan camera werent there at all. The app just doesnt run well at all on chromebook at least on mine. Got rid of it and went back to beta channel. While I could view the camera. It would freeze too every once in awhile. And zoom was all funky. I know that its not supported or anything but I wish it worked better on chromebook. Maybe its because of the more pure chromebook experience like my pixel 3 and android with the pixelbook. But yeah didnt work even close to well enough to keep. And I had to go dev to get it to work. Well probably not cause i had to add -s 100.115.92.2:5555 to get it to select the right device as it emulates another as well for some reason. I just hope they create an app that is cross platform android at least in the future or just an online viewing platform similar to my other camera.

I set this up yesterday on my chromebook, I was able to get it working while on the stable channel, but the app is just too buggy. @mikejones777 do you have any issues with yours?

The camera views work fine but when I try to view an event the video display is compressed at first then shows only part of the video. Its OK but Wyze does have a little work to do before its ready for prime time

I don’t think Wyze will be doing much as Chromebook is not an supported platform. Google even acknowledges that Android app support is limited and imperfect.

Yeah, there’s not much hope for the Wyze app to work well on chromebook, tinyCam works pretty good, especially for live streaming.

I have noticed the Cams with Cam Plus subscription on them display the events fine, its just the other Cams with just Person Detection. So Wyze knows how to fix it, just depends on if they make it a priority fix.

@Mods Shouldn’t this entire thread be in the Beta Program section of the forum?

Ken, how many streams were you able to stabilize on the TinyCamPro App.

I have yet to establish a stable method to see more than 3-4 rtsp streams from wyzecams, I’ve looked at BlueIris, TinyCamPro, and MotionEye.

I typically only view 4 at a time, but I could do some testing to see how many are stable

That would be very helpful. There are anecdotal but consistent reports of Wyze cams impacting system loads by magnitudes not exhibited by other cams in the same ecosystem. In my case, I have a blend of Wyze, Ring, Blink, Eufy, and ESP cams. If I stream to view in a multiplex setup, I will hit issues if I load too many concurrent Wyze cams to the mix.
I can hit that tipping point with as few as 4 HD Wyze cam streams.
If Wyze is conforming to spec on their protocols, why the load differential?

I streamed 6 cams, they seemed pretty stable…anything in particular I can check? 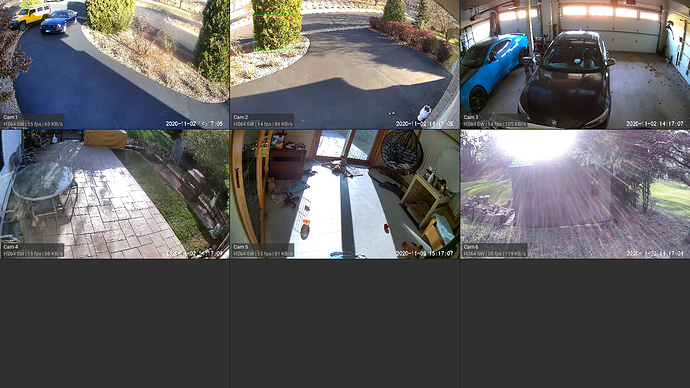 It’s weird how multiple cameras effect load on some more than others, even with good routers. For example, I have 6 cameras online, 4 Wyze, 1 Eufy 2k and one Foscam inside a birdhouse. One of my cameras streams simultaneously in HD mode to two wall mounted tablets 24/7 and my wife often has another wyze camera streaming in HD for hours during the day on her phone for the daycare kids, and I often check other cameras at the same time in HD mode on my phone, and nothing on my network ever slows down. That’s even when watching 4K online streaming on TV while another TV streams in 1080P at the same time.

Actually, thinking way back, I used to have my 24/7 streaming camera drop offline when my wife would open the Wyze daycare nap cam on her phone. After a bunch emailing with Wyze support, they couldn’t figure it out. However, I did find the cause myself which was groups. I discovered the problem started around the time I had cameras on my wife’s phone grouped together for Daycare. Once I deleted the groups the dropping of the other camera that streams 24/7 on two tablets completely stopped.

I don’t know what it was about groups in our case because as an experiment, I opened a single different Wyze camera in HD mode on four different devices at once, and they all streamed fine. However grouping 3 cameras together on one iPhone and opening that group it, caused the problem to return and the tablets dropped offline.

This was at least a year and several app versions ago.

Yup, the only time I’ve ever had issues is when using groups. Which was earlier this year. The other thing to note about groups, even if your CAMs are set to HD…when you live stream a group everything you’re looking at is SD.

No more use of groups for this guy either.

What do you mean by “beta channel”. I have a chromebook as well and wanting to view multiple cams at a time using it.