Google Play store says the Wyze app is not compatible with my new Asus Chromebox running Chrome OS - Version 70.0.3538.110 (Official Build) (64-bit). The box is NOT in developer mode and won’t likely be because I’m unclear on what information will be lost and I don’t want to setup my accounts again. Future implementation? Would be really sweet to view the live cam in a window on my desktop.

I’m in the same boat execpt on a chromebook. The old app worked but the new one is not compatible.

I’ve only just purchased my Chromebox. Love it, but like everything, it’s not perfect. Mine has the Intel processor though, might be part of the problem

Just got a Chromebook with M3 processor. Wyze app won’t install. ChromeOS is 71.

Any reason why the Wyze app is not compatible with Chrome OS. All my other apps including Tinycam Pro seem to work just fine. The Beta version also seems to be the only one available on the play store. Do you guys need to flip some sort of switch? 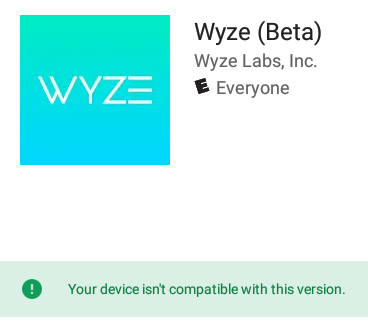 I found the same. A couple of weeks ago I flipped my Chromebook to developer mode, and sideloaded the Wyze app. Everything was almost working as expected, just a couple of strange situations when viewing video in full screen, but some other android apps are a little weird in Chrome OS.

I have since turned off devoper mode, because the warning screen on boot up was more annoying than not being able to see my cameras on that particular device.

It would be great if it was supported and you could just install right from the Play Store.

Yep I am running the Beta build on my pixel book and the older version of Wyze worked, but the current build shows as not compatible. Is this something that will be supported again in a future build? Also wondering if it is because I am on the beta builds of the android application.